Syracuse Has Gaps To Fill On The Offensive Side Of The Ball. 2020 Transfers Could Make Immediate Impact 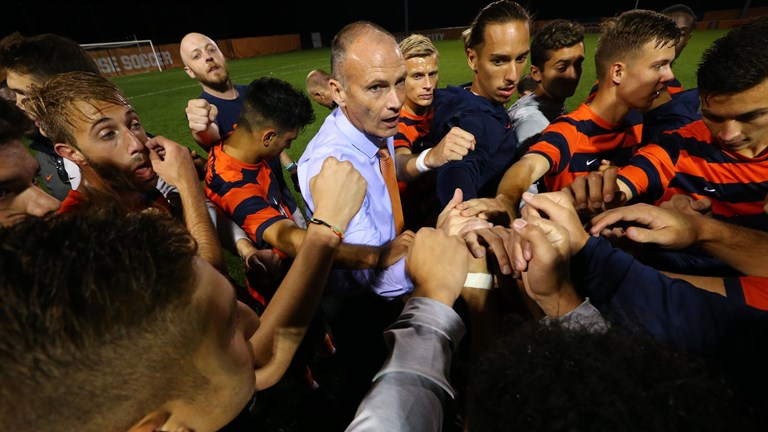 Syracuse will be without its top three goals scorers including Ryan Raposo who departed early to enter the professional ranks. Ian McIntyre has reloaded quickly and seamlessly in the past by using transfers to help fill the gaps.

Departures and Gaps – Forward Ryan Raposo (15g, 7a), a 2019 All-ACC First Team selection, signed a Generation adidas contract with MLS at the conclusion of his sophomore season and was was the fourth overall pick by Vancover FC. Departures due to graduation include forwards Massimo Ferrin (7g, 9a) who was a two-year starter and Severin Soerlie (4g, 4a), midfielder Brian Hawkins, and defenders Nyal Higgins (1g, 1a) who was the number nineteen pick in the MLS SuperDraft, John-Austin Ricks (0g, 2a) and Mickey Watson, and backup goalkeeper Jake Leahy.

Opportunities for Improvement – Tighten up on the defensive side of the ball. Last year Syracuse allowed a total of thirty-three goals. That is the most goals that the Orange has allowed in a single season in the ten years that Ian McIntyre has been the head coach. You have to go back to the 2009 season to find a Syracuse defense that allowed more goals than that. The Orange scored a total of forty-one goals last year. At first glance a ratio of forty-one goals scored to thirty-three allowed looks pretty good but a deeper dive into the data shows that eleven of Syracuse's goals came in a filler contest against SUNY Morrisville.  Without those eleven goals the Orange would have allowed more goals than they scored last year for the first time since 2011.

Coach's Recruiting Class Comment – Ian McIntyre stated in regard to the four players who joined the Syracuse program in the spring, "We have added quality, character and important leadership to our squad with the introduction of Matt (McDonnell), Manel (Busquets), Roque (Viegas), and Nathan (Toledo). Each of these talented young men will take great pride in representing our Syracuse program. They will tremendously help our continuous efforts to improve both on and ott the soccer pitch".

Summary – The challenge of filling a gap due to the early departure of a player to enter the professional ranks has become the norm rather than the excepetion for Ian McIntyre. For the past six seasons Syracuse has had to fill a void due to the early departure of a key player who signed a Generation adidas contract. In the last five cases the player has departed at the conclusion of their sophomore season.

Syracuse will enter the 2020 season with the task of filling the void that exists due to the departure of forward and go-to guy Ryan Raposo who powered the Orange attack in 2019 with fifteen goals. Prior Generation adidas departures were forward Tajon Buchanon, midfielder Mo Adams, defender Miles Robinson, midfielder Julian Buescher, and goalkeeper Alex Bono.

Syracuse will enter the 2020 season with more than the usual amount of uncertainty on the offensive side of the ball due to the loss of Roposo and forwards Massimo Ferrin (7g, 3a) and Severin Soerlie (4g, 4a). Had Roposo not left early, the picture on the offensive side of the ball would be much different. As a result new playmakers will need to emerge to power the attack as Raposo did last year and Buchanon the year before.

Graduate student foward Matt McDonnell, a transfer from Boston University who scored twenty goals and contributed ten assists, junior midfielder Manel Busquets, a transfer from Duquesne University where he netted eleven goals and contriubted seven assists, and sophomore midfielder Roque Viegas Jr, a transfer from Monroe College who scored fourteen goals with ten assists last year, are among the newcomers that Syracuse has announced to date who could help fill the void on the offensive side of the ball. All of the transfers have solid credentials but how well and how quickly they adjust to the level of competition in the Atlantic Coast Conference remains to be seen.

Sophomore Amferny Sinclair (1g, 0a) and junior Julio Fulcar (0g, 1a) along with Goldhar and Triantafillou (2g, 3a) are returning midfielders who were starters last year who figure to play prominent roles in 2020. Senior Dylan McDonald and sophomore Noah Singelmann (1g, 0a) join Norheim to give the Orange a solid core of experieced defenders to build upon. Junior goalkeeper Christian Miesch, the starter between the pipes last year with a 1.67 goals against average and five shutouts, returns to anchor the defense.

McIntyre annually does an excellent job of bringing on board a recruiting class that addresses both immediate and longer term needs. He has leaned heaviliy on transfers at times to fill the gaps that exist and has done an excellent job of merging them in with returning players to create a unified team with a solid work ethic. The result should be another exciting but at this point uncertain season at Syracuse.