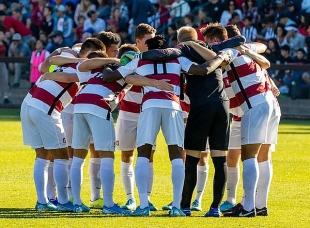 Stanford has plenty of talent, experience and depth. They will be very good again in 2020 if everyone stays healthy and they get the kind of improvement expected from the young players who performed well last year.

Departures and Gaps – Departures due to graduation include two-time All-American center back Tanner Beason (5g, 1a) who was a four-year starter, midfielder Derek Waldeck(4g, 8a) who was a 2018 and 2019 First-Team All-Pac-12 selection and three-year starter, and midfielder Jared Gilbey (0g, 6a) who was a four-year starter and 2018 and 2019 All-Pac-12 Second Team selection. Anytime Stanford has to replace a talented and experienced center back as they do in 2020, the replacement must establish early own that they can handle the physicality.

Opportunity for Improvement – The Cardinal showed a lot of grit in coming from behind in several games last year but they also placed themselves in a hole and difficult situation at times when they came out flat and allowed their opponent to score early.

Summary – Redshirt junior Zach Ryan (6g, 2a) and sophomores Ousseni Bouda (5g, 5a) and Gabe Segal (6g, 0a) return up-top to power what should be a potent Cardinal attack in 2020. Ryan is a two-year starter. Bouda was the 2019 All Pac-12 Freshman of the Year. Segal is a dangerous finisher who also had an impressive freshman season. Senior forwards Arda Bulut (2g, 0a) who appeared in twenty-two contests last year and Jack O'Brien who saw action in nine games also figure to be in the mix in 2020.

The departure of Derek Waldeck (4g, 5a), a three-year starter, and Jared Gilbey (0g, 6a), a four-year starter, necessitates some reloading in the midfield heading into the 2020 campaign. A solid contingent of midfielders return including seniors Charlie Wehan (3g, 2a) who has been a starter the past two seasons and Marc Joshua (1g, 0a), juniors Will Richmond (1g, 0a), Ryan Ludwick and Kyle Casey, and sophomore Cam Cilley who now has the benefit of a year of starting experience under his belt.

The biggest question mark heading into 2020 is in the back due to the leadership void that exists due to the the graduation of All-American Tanner Beason. Beason's impact and contribution was evident last year during the eight conference contests in which he was out of the lineup due to injury. Senior Logan Panchot (0g, 8a), a 2019 All-Pac-12 Second Team selection, returns to add stability to the backline along with sophomore Keegan Hughes (0g, 1a) who was a 2019 College Soccer News All-Freshman First Team selection and sophomore Keegan Tingey (0g, 1a). The experience that Hughes and Tingey gained last year should help offset the departure of Beason. Redshirt junior defender Andrew Aprahamian who participated in eleven contests last year is among other returning players who look to be in the hunt for a greater role in 2020.

Redshirt junior All-American Andrew Thomas returns to anchor the Stanford defense in goal. Thomas, an engineering physics major with a 3.94 grade point average, a 0.72 goals against average, and eight shutouts last year is a prime time shot stopper who seems to thrive under pressure. Redshirt sophomore Matt Frank who appeared in three games last year is among several other talented returning netminders.

Stanford was 14-3-5 last year and advanced to the College Cup (Final Four) for the fourth time in the last five years. Their credentials include national championships in 2015, 2016, and 2017. Stanford's trademark under head coach Jeremy Gunn has been solid team defense, an opportunistic offense, and effectiveness through clincial delivery and finishes out of set pieces. It is highly likely that the Cardinal will again excell in each of those areas in 2020.

Last year freshmen played a key role early on and continuted to improve as the season progressed. They quickly adjusted to the college game and to Stanford's style of play which can not always be counted upon. As a result, chances are pretty good that the current sophomores will follow up with the bump in performance that usually occurs between freshmen and sophomore years.

If everyone who is expected to return does so and remains healthy there will be no shortage of experienced talent at Stanford in 2020. In addition the recruiting class should add depth. The bottom line is that a talented group of finishers return to bolster Stanford's offensive arsenal, and enough size and experience returns in the back to enable the Cardinal to continue to play an aggressive, disciplined and sufficating style of defense. There is a lot to like about Stanford in 2020. Like every team, a lot of things have to fall into place but if they do Stanford has a good chance of winning the Pac-12 title and once again playing their way into the College Cup.