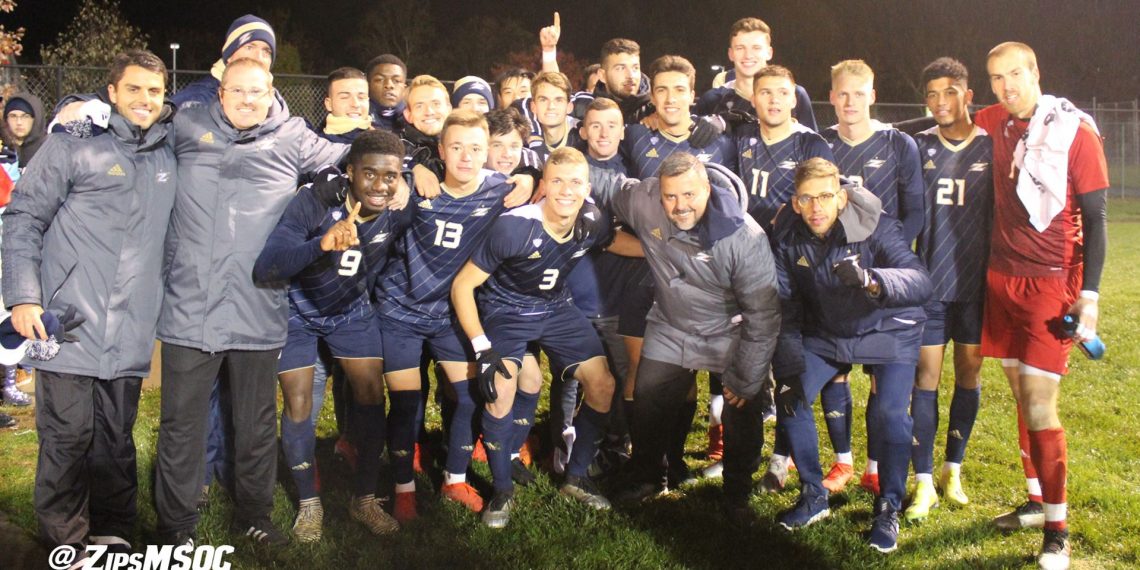 Akron's run of seven consecutive MAC Tournament titles and twelve consecutive appearances in the NCAA Tournament came to an unexpected end last year with a 6-10-2 overall record and 4-0-1 mark in MAC play when the Zips were upset 1-0 in the semifinals of the Mid-American Conference Tournament.

Departures and Gaps – Departures due to graduation include midfielder Skye Harter, a 2018 All-MAC First Team selection who was hampered by injury in 2019, starting defender Christian Lue Young (1g, 2a), defender Tom Smart who appeared in eight contests and defender Leonard Sohn who played in eleven matches.  Akron will also be without starting goalkeeper Tor Saunders who had a 1.39 goals against average who transfered to Coastal Carolina and midfielder Mani Austmann who transferred to UNCG.

Opportunities for Improvement – For the second year in a row Akron began the season slowly. In 2018 the Zips began the year with a 1-3-1 record but they pulled together and rebounded to close out the season with a nine game winning streak that carried them all the way to the national championship final. Last year they began the season with a 0-0-7 record and didn't record their first win until October. Akron played well enough in October to secure the regular season MAC title but they never fully gelled as a team on either side of the ball.

Coach's Recruiting Class Comment – Jared Embick stated, "We are excited about the incoming players for the spring. We wanted to add a group of players that will come in and compete right away and have a strong mentality. All these players are strong on the ball and have a competitive mindset."

Summary – Akron began the 2019 season with a challenging schedule in which success would have to be hard-earned. But who would have thought that an Akron team that advanced to the College Cup in 2018 would not secure a win until October. During the seven seasons that Jared Embick has been the Akron head coach, the Zips have posted the highest winning percentage in the country but it's fair to say that they were near the top of the list of teams that didn't play to their potential last year. True, they won the regular season MAC title and yes, the MAC has become a much more balanced conference but this is a program for which a berth in the NCAA Tournament and a deep run in it has become the norm.

The 2019 season is now in the rearview mirror. It's time to look at the bright side heading into the 2020 season which is the fact that Akron returns a lot of very talented and capable players. The Zips have a winning culture and Embick has established that he knows what it takes to win at the highest level. As a result there are plenty of reasons to be cautiously optimistic that Akron will bounce back in 2020.

Senior forward David Egbo (7g, 4a), a 2019 All-MAC First Team selection, returns to give Akron a top notch finisher. Sophomore Will Jackson (4g, 3a), a 2019 All-MAC Second Team member, adds another dimenison to the attack up-top. Junior Federico Serra (0g, 1a) who appeared in fourteen contests last year is among other returning forwards who should contribute.

Senior and team captain Daniel Strachan (1g, 1a), a 2019 All-MAC Second Team honoree and three-year starter returns to add stability to the midfield along with junior Colin Biros (2g, 1a), a 2019 All-MAC First Team member and two-year starter, junior Sam Tojaga (1g, 1a) and redshirt senior Diogo Pacheco (2g, 2a) who was slowed by injury last year. Sophomores Henrique Cruz (0g, 2a) who appeared in twelve games with seven starts last year, Johnny Fitzgerald, and Joey Paulus are among other returning midfielders who will challenge for additional minutes in the midfield in 2010.

The backline has the potential to be very good with juniors Carlo Ritaccio (0g, 1a), a two-time First Team All-MAC selection, Pol Hernandez (0g, 4a) and Marco Milanese (1g, 0a) slated to return. Ritaccio, Hernandez and Milanese have been starters for the past two seasons. Redshirt junior Declan Watters who appeared in thirteen contests last year with four starts and sophomore Jaden Wright who participated in nine contests with two starts are among other very capable returning backs who will be in the hunt for a greater role in 2020.

Redshirt freshmen Cameron Victor and Grant Abbott who did not see action last year are among returning goalkeepers who will battle for the crucial starting job between the pipes. Akron's recruiting class which has not yet been annouched will also likely include an additional netminder or two who will also be in the mix. The newcomers listed below are the anticipated members of the class.

The 2020 season could be a season of tremendous progress for the Zips if the following occurs: (1) the 2019 campaign serves as a wake up call that results in a cohesive and focused team from the get-go; (2) The midfield is able to consistently get the best of the run of play in the middle third and get the ball to the feet of Egbo and Jackson among others up-top: (3) Egbo and Jackson and others are able to finish the scoring opportunities that come their way and add the spark to the attack that forward Marcel Zajac did in 2018: (4) the backline of Ritaccio, Hernandez and Milanese play to their potential; and (5) The recruiting class gives the Zips the lift and creates the level of competition that the current juniors did as freshmen.

The bottom line is that Akron will be talented and experienced in 2020 but put simply they underachieved as a team last year. So the question is: Can they merge their individual talents together in 2020, as they did down the homestretch of the 2018 season, so that the whole is greater than the sum of its individual parts?

Will Meyer – Goalkeeper – Solon, Ohio – Solon High School – A senior transfer from Louisville where he appeared in four contests in 2018 and nine in 2017. First Team All-Ohio at Solon High School. Played for Cleveland Soccer Academy.