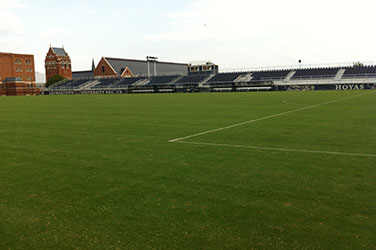 It’s a testing time in the realm of college sports with the COVID-19 pandemic bringing life to a virtual halt. Though in its offseason, college soccer is enduring the effects of the virus as recruitment camps have been canceled indefinitely and players travel home to be with their families. Priority number one was always to ensure the players’ safety, and Marquette men’s soccer head coach Louis Bennett was one of the first among his conference peers to speak his mind on the situation.

"We will deal with challenges as they continue to arise,” said Bennett. “Our primary concern is safety and a healthy environment for our student-athletes, staff and recruits. We don't want to put anyone at risk, and as per NCAA rules, the next period of time until April 15 will be a dead period for in-person recruiting. We're just coaches, not doctors, so we want to make sure safety is our primary concern."

Still, coaches are scrambling to piece together training regimes to provide some type of normality to their players’ lives. Unfortunately, the true challenge lies in accepting the current circumstances as a temporary normal. But, as important as the physique and maintenance of their team’s technical quality is, the focus for Big East coaches is primarily on caring to their players’ mental and emotional needs.

“You have to make sure that they’re all mentally OK,” said Paul Snape, head coach of the Butler men’s soccer team. “I have a lot of smart kids on my team that we check in with, but they’re so disciplined and motivated that they take ownership for their academics. But there are other guys who are working hard and need help, and those are the guys we have to monitor closely.”

Working hard, as Snape put it, involves keeping up with their online learning, completing at-home workouts and checking in on their teammates and coaches daily. The players’ routines that helped balance these responsibilities at school are no longer applicable, though, and establishing a new one will undoubtedly be an added source of stress. The physical distance that divides teammates and coaches and the massive decline in social interaction can also take a hefty toll on the players’ morales.

Georgetown men’s soccer head coach Brian Wiese stressed the importance of replicating the social and structured environment of a college campus during this time. Admittedly, it isn’t going to be perfect, but it would be shaped so that the mental, physical and emotional needs of the players are met. Adaptability and flexibility have been two key attributes necessary for his team to navigate through the early stages of this pandemic.

“I joked around about Time having a Person of the Year because now we’ll have an ‘App of the Year’ with Zoom,” said Wiese. “It’s amazing how important seeing faces is. We really want to put as much stuff on there as possible. Right now, each of the coaches are going through 45-minute meetings with individual players just to see how they’re doing and what their set up is like at home. We talk soccer with them, talk about the team and anything to just check in.”

For Coach Wiese, these individual meetings serve a multitude of purposes. He and his assistant coaches have met with the leaders of his returning players to discuss the game plan during quarantined training and the standards they want set for the nine freshmen joining the squad in the fall. Wiese added that each of the freshmen have been called individually as well and are being cared to in the same fashion as their future teammates.

While the technological face-to-face interaction may not provide the same influence as being physically close to one another, Coach Snape emphasized a need to look on the bright side of this situation. He has personally started reading books on leadership and engaging in activities that he hopes will help him improve both as a coach and as a person.

“We’re really working on the mindset of players,” said Snape. “How do you deal with adversity? How do you overcome these problems? How do you connect with the team and the coach? Of course, we want to get back onto the field, but right now we have to focus on the positives that we can take away from this.”

On the recruitment front, Snape is focused on his team’s current condition. This is a situation that is out of his hands, and he and the staff must focus on what they can control. With only one spot left to fill for the fall, Snape is confident the data he and his team have gathered will be enough to get the impact player they are looking for.

That doesn’t take away from the fact that there are genuine concerns for high school players finding the right school to commit to. Coach Wiese had to cancel two player visits of his own due to the pandemic. He is also relying on preestablished player information to help get them through what will be a dry patch nationwide for college soccer recruitment.

“The way that everything is modeled at the moment, though, it looks like we’re going to have to cancel our middle school camp and turn it into a high school camp because that may be the only way we see players between now and November or December,” said Wiese. “I’m concerned kids will make rash decisions and not fit in. That’s going to cause a ripple effect of kids transferring.”

For now, though, the attention is entirely on their own players and taking on the conditions of this catastrophic pandemic day by day. The players are safe and healthy with their families, and that’s all that matters. While an official return to the field is unknown for any college sport, there is no doubt the Big East soccer teams are raring to get back into the groove of their regular training schedules.

Justin Sousa is a contributing writer for College Soccer News. He can be reached at justin333j@gmail.com.