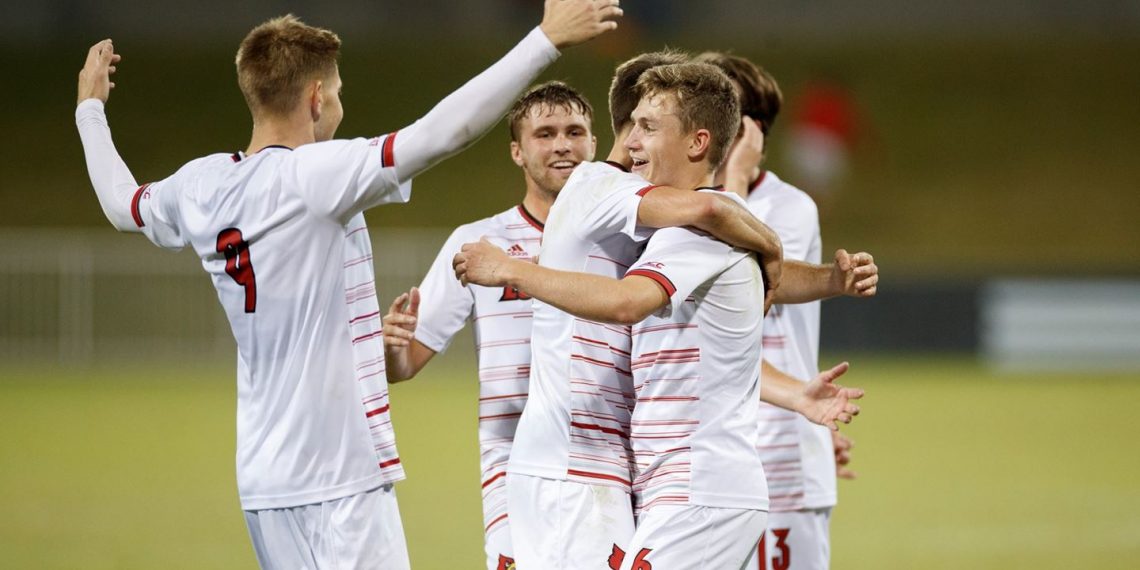 Louisville will be without its top goal scorer and playmaker last year and they lose a lot of experinece in the back due to graduation. But with a solid contingent of proven players returning and the addition of a very talented recruiting class the cupboard is far from bare. Another winning season and berth in the NCAA Tournament is clearly within reach, but upward movement in the highly competitive Atlantic Coast Conference is not going to be easy.

Opportunities for Improvement – Consistency.of play and the avoidance of lapses in play on the defensive side of the ball. Louisville allowed a total of twenty-eight goals last year.

Coach's Recruiting Class Comment – John Michael Hayden stated, "This class exemplifies the high standards we have set for the program. These players have each excelled tremendously in their youth careers and are very much driven to succeed. Their character is strong, which will be the foundation for their growth within our program."

The Cardinals were 10-8-2 last year with a 3-4-1 mark in ACC play in John Michael Hayden's first season at the helm of the program. Louisville enhanced their standing with a season ending run to the Sweet Sixteen with wins over South Florida 4-1 and number fourteen seed UC Davis 1-0 before a season ending 5-1 loss to Georgetown. Louisville concluded a roller coaster season ranked as the number eighteen team in the country in the final College Soccer News Poll and the number twenty team in the final United Soccer Coaches Poll.

The 2019 campaign was a productive but not classic Louisville season. The nature of Louisville's 2019 season is reflected in the fact that they had signature wins over non-conference foes Kentucky 3-0 and Georgetown 1-0 but struggled against the top tier ACC opponents losing to Virginia 2-0, Clemson 4-0 and Wake Forest 3-1 in regular season play and Virginia Tech 2-0 in the conference tournament.

Seniors Emil Elveroth (3g, 1a), Izaiah Jennings (4g, 1a) and junior Haji Abdikadir (1g, 0a) look to be among returning forwards who will be counted upon to add additional punch to the attack in 2020. Nico Diaz and Aboubacar Camara are among the members of the fall recruiting class who could add an additional dimension to the offense. The graduation of Cherif Dieye leaves a big void in the midfield but a solid contingent of linkmen return led by seniors Elijah Amo (0g, 1a), Liam Bennett (1g, 0a) and Carlos Sanchis, junior Cameron Wheller (0g, 1a) and sophomore Bradley Sample (1g, 1a).

The backline requires significant reloading due to graduation. Sophomore Leonard Getz (1g, 2a) and junior William Portman are among experienced backs who are slated to return in 2020. Nico Carrera, a 2019 United States Youth All-American, looks to be among the newcomers who could immediately challenge for playing time in the back. Redshirt senior Jake Gelnovatch, a starter for the past two seasons, returns in goal to give the Cardinals an experienced and composed presence between the pipes.

Hayden had a good first season as the Louisville head coach. If the Cardinals can build on their strengths while addressing the weaknesses that existed last year there's reason to believe the 2020 campaign will be better. It is a plus that Hayden now has a year at the helm of the program under his belt, that a solid foudation returns upon which to build, and that there will be promising newcomers in the fold. Nonetheless, it is a given that the ACC schedule will again be challenging and unforgiving from top to bottom. Louisville will be competitive but it is hard to envision significant improvement without a more dynamic attack, balance, and consistency on the defensive side of the ball.

Aboubacar Camara – Forward – Upper Darby, Pennsylvania – Played club for Philadelphia Union. Called into the United State U-17 National Team during the Youth Summit in Lakewood Ranch, Florida. 2018 and 2019 United Soccer Coaches Youth Boys All-East Region. Since 2016 he has scored a total of fifty-six goals while playing in seventy-six games with the Philadelphia Union.

Nico Diaz – Forward – New Smyrna Beach, Florida – Joined MLS expansion Inter Miami for the 2019-20 season where he plays with the club's U-19 Academy. Played three years with the Orlando City SC Academy where he scored forty-four goals in sixty-five starts.

Bryce Lebel – Defender – Sparta, New Jersey – Played for the New York Red Bulls since 2016 with sixty-seven starts and seventy-eight appearances. Called up to the U-19 team for the 2019 Development Academy Playoffs. Regularly trains with the NYRB first team.

Roarke Schmeider – Midfielder – Aurora, Ohio – Played for the Internationals since 2016. Has played for the U-19 team for the past four seasons. Will enroll at Louisville in January after graduating a semester early from Aurora High School.