Campbell Enters The 2022 Season As The Front Runner In The Big South Conference And A Contender On The National Scene. 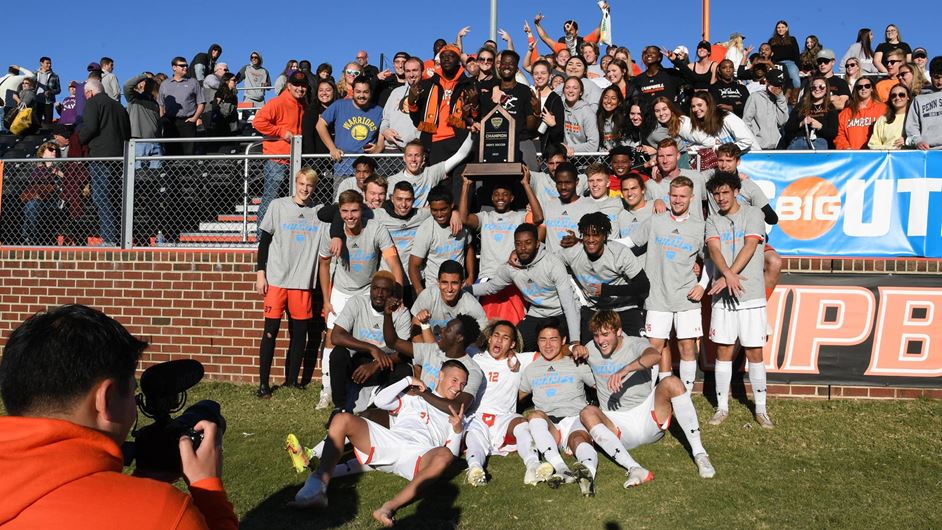 The Camels Have Earned A Berth In The NCAA Tournament Three Out Of The Past Four Years And Won Both The Big South Conference Regular Season And Tournament Titles Twice In The Past Three Years.

The 2021 Senior Class completed their tenure as the most successful class in program history. Departures due to graduation include the following:

Forward Jake Morris (5g, 8a) who was a 2021 All-Big South Second Team selection and two-year starter after transferring in from Tyler Junior College. Morris signed a MLS contract with the Columbus Crew.

Forward Caleb Martinez (1g, 0a) who appeared in 22 contests during three seasons.

Campbell should again have a very explosive offense. The Camels scored a total of 55 goals during the 2021 season while allowing 21. The greatest opportunity for improvement exists on the defensive side of the ball.

Dustin Fonder stated, “The 2022 recruiting class is off to a great start with four mid-year enrollees. The four young men possess great soccer abilities and high character. We hope to blend them into the team during the spring developmental season.” Fonder added, “We are also working hard to round out the 2022 class with additional outstanding student-athletes joining us in August.”

All of the playmakers are back with the exception of forward Jake Morris (5g, 8a). The Camels had one of the most prolific offenses in the country last year. Fifteen different players scored at total of 55 goals. This is a team that was capable of scoring in multiples as reflected in the fact that they scored three or more goals in 12 of their 21 games in 2021 including contests with very competitive UNC Greensboro, UNC Wilmington, and High Point teams.

Campbell should again have an explosive and balanced attack in 2022 with six of their top eight goal scorers including their top three producers from 2021 slated to return.

Redshirt junior midfielder Tyler Young (9g, 9a), the 2021 Big South Player of the Year, sophomore forward Kenny Amiche (7g, 11a), a 2021 College Soccer News All-Freshman First Team selection who had a banner freshman season, a now healthy redshirt senior forward Jalen James (4g, 0a), a 2020 All-Big South First Team selection who missed the second half of the 2021 season due to injury, senior forward Danny Hernandez (9g, 1a) and junior forward Gerard Broussard (5g, 2a) are among those who will add firepower to the offense. Senior Jamie Lamb (1g, 1a) and redshirt junior Adrian Morales (1g, 2a) are among other returning midfielders who look to be in the mix.

The graduation of holding midfielder George Bediko (2g, 2a) and back Franck Momo (2g, 6a) who were multi-year All-Big South Team members creates a void that must be filled. Both were tough and experienced on the ball defenders who also contributed to the offense.

Redshirt junior goalkeeper Edu Rodriguez who had a 0.94 goals against average in 2021 with six shutouts returns to give the Camels an experienced presence between the pipes.

Dustin Fonder has put in place a winning culture and formula for success since becoming the head coach at Campbell in 2015. The program has continued to improve and there has been an influx of talented recruiting classes. Campbell took took a big leap forward in 2018 when the Camels won the Big South Tournament and returned to the NCAA Tournament field for the first time since 2007. They took another step forward in 2019 when they secured the program’s first ever Division I win in the NCAA Tournament and returned to the national rankings for the first time since 2008.

Campbell now plays an exciting brand of soccer that has made them the team to beat in the Big South Conference and enabled the Camels to punch their ticket to the NCAA Tournament three out of the past four seasons.

Good things are happening in Buies Creek but Campbell now has a target on their chests in conference play and no non-conference opponent is going to take them lightly. The Camels are a talented, they have momentum, and now expect to win.

Campbell will enter the 2022 season with a team that is very capable of again winning the Big South regular season and tournament titles and making a run in the NCAA Tournament. However by no means are either a given. They will continue to be challenged by competitive conference foes like High Point and must continue to take it one game at a time and consistently play to their potential in order to secure the conference title and the automatic berth in the NCAA Tournament that accompanies it.

Look for a dynamic and multi-dimensional Campbell offense powered by Young, Kemy Amiche, Jalen James and Danny Hernandez among others to again dial up a high powered attack in 2022. In addition, the experience Edu Rodriguez gained in goal last year and a talented backline headlined by Bissafi Dotte, Diego Konincks, and Moses Mensah should be very good.

Angel Bacho – Midfielder – San Antonio, Texas – Central Catholic – Bacho is a transfer from UNC Greensboro with two seasons of eligibility remaining. He played in 46 contests at UNCG with 28 starts and recorded a total of four goals and five assists. An All-State performer at Central Catholic High School. Played for the Classics Elite Club.

Tiago Lopes – Midfielder – Porto, Portugal – A transfer from UT Southern with three seasons of eligibility remaining. Played two seasons at NAIA Tennessee Southern where he was a Mid-South Conference Honorable Mention selection. Played in 31 games with 30 starts over two seasons with UT Southern. Started in 19 games in 2021 scoring five goals and contributing five assists. Played in 12 games at UT Southern with 11 starts in 2020.

Sondre Olsen – Forward – Tromso, Norway – A graduate transfer from Division II Young Harris where he was a three-time All-Peach Belt Conference selection. Played in 61 games for Young Harris scoring 21 goals and contributing 11 assists. Played with the Flint City Bucks of the USL League 2.