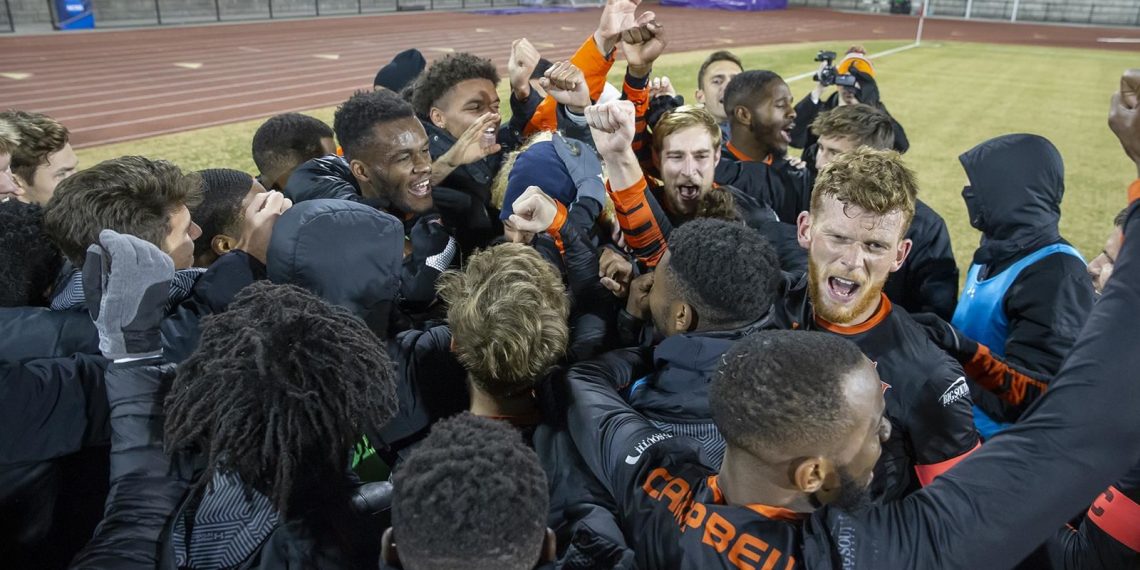 Expectations are high at Campbell after back-to-back appearances in the NCAA Tournament for the first time in the histroy of the program. The potential exists for another banner season in 2020 for a team that returns eight starters from the 2019 squad that was 17-3-2, tied the school record for wins, won the Big South Conference regular season and tournament titles, and advanced to the second round of the NCAA Tournament. .

Departures and Gaps – Losses due to graduation include center back Gideon Betz (0g, 1a) who was the 2019 Big South Defender of the Year and a four-time All-Big South Conference selection, midfielder Ian Rees (5g, 5a), a 2019 All Big-South Conference First Team selection, three-year starter and team captain, and forward Aigbekan Nosegbe (3g, 2a). Campbell will also be without midfielder Alemu Mercer-Miko (1g, 7a) during the 2020 season.

Opportunities for Improvement – Merging a large eleven member recruiting class that includes six transfers in with a solid contingent of returning players provides the opportunity for a very deep team. It also can be problematic in terms of team chemistry. Others will have to step forward to replace the leadership and stability that Ian Rees and Gideon Betz provided.

Coach's Recruiting Class Comment – Dustin Fonder stated, "The class has a nice blend of transfers and freshmen, and also of international and domestic players. We feel like we have some guys who can make immediate impacts and others that can develop into important roles down the line. We have established a championship culture on the field, in the classroom and in the community. Each of these newcomers will be held to that elite standard. We feel confident that they will all rise to that challenge and continue to pust or organization forward."

Summary – Campbell made their presence known on the national scene last year with an explosive attack and solid play on the defensive side of the ball. The Fighting Camels will enter the 2020 season with an impressive core of players back on both sides of the ball and the momentum that accompanies a very successful 2019 season. It is reasonalbe to conclude that a berth in the NCAA Tournament is now an expectation at Campbell after back-to-back appearnaces in 2018 and 2019.

Campbell's top four goal scorers return from the 2019 team that averaged a total of 2.68 goals per contest. The big threat, but by no means the only weapon in the Fighting Camels attack, is senior All-American forward Thibaut Jacquel who was the 2019 Big South Attacking Player of the Year. Jacquel had a spectacular 2019 season during which he was responsible for eighteen of the fifty-nine goals Campbell scored with seven game-winning goals and five multi-goal contests.

While the Fighting Camels have several capable goal scorers, opponents that are unable to contain Jacquel will have a difficult time topping Campbell. Senior Alex Egeonu (6g, 3a) who has been a force off the bench for the past three seasons and redshirt sophomore Jalen James (3g, 2a), a 2019 Big South All-Freshman selection, are among other returning forwards who should add additional punch to the offense in 2020. Junior Daneil Hernandez, a transfer from Central Methodist University where he was a two-time NAIA All-American, is among the newcomers with the ability to add additional firepower up-top.

The midfield will require some rebuilding due to the graduation of Ian Rees, the MVP of the 2019 Big South Tournament, who was a team catalyst and leader. Junior Matt Lock (6g, 7a), a playmaker who was a 2019 Second Team All-Big South Conference selection, returns to add another potent ingredient to the offense and help set the pace for the team either up-top or in the midfield. Senior Humberto Chavez (0g, 1a), a three-year starter, senior holding midfielder George Bediko (0g, 1a), junior Eren Elbustu (6g, 4a) and junior Caleb Martinez (1g, 1a) round out a solid contingent of returning linkmen. The recruiting class includes several experienced midfielders who should compete for a starting job and add depth.

The Fighting Camels will miss the stabity that defender Gideon Betz, a four-year starter, brought to the backline. The good news is that a solid necleus returns from the Campbell defense that had a 0.752 goals-against-average last year. Sophomore left back Moses Mensah, the Big South 2019 Freshman of the Year and a College Soccer News All-Freshman Team selection, junior right back Franck Momo (0g, 6a) and sophomore center back Bissafi Dotte (2g, 0a) who were starters last year return in 2020 with the advantage of a season working together. All three were 2019 First Team All-Big South selections who established last year that that could get the job done. Senior back Dylan Sadler (3g, 1a) who appeared in fifteen contests last year with four starts also figures to be in the mix. Junior transfer defender Jamie Lamb from Purdue Fort Wayne is among several members of the recruiting class who should compete for playing time in the back. Senior Samuel Lechuga, a 2019 All-Big South Second Team selection with nine shutouts last year, returns to anchor the defense in goal.

It can be difficult for a team from a mid-major conference to play their way into the national rankings. Campbell did it last year with a fifteen game unbeaten streak that included a 1-1 tie with North Carolina, two wins over conference foe High Point, and a 3-1 win over James Madison in the first round of the NCAA Tournament.

Based on their success last year and the talent that is returning on both sides of the ball, Campbell should begin the 2020 season with a national ranking. They also will be the team to beat in the Big South Conference. Maintaining a national ranking can be more difficult than chasing it. Clearly no one is going to look past the Fighting Camels in 2020. The success that they enjoyed last year will ensure that they will draw everyone's best shot.

Chances are pretty good that the success the program enjoyed last year will whet the appetite of the returning players for more of the same in 2020. Campbell's standing on the national scene as well as their ability to secure the Big South regular season and tournament titles will likely hinge on the consistency of their play, the ability of the coaching staff to merge the newcomers in with the returning players, and whether or not the focus and team chemistry exists to take it one game at a time.

Daniel Hernandez – Forward – Bogota, Columbia – Central Mehodist University – A junior transfer from Central Methodist University where he was a two-time First Team All-American. Named the Most Outstanding Offensive Player at the 2019 NAIA national championship. Scored seventeen goals and had eleven assists as a sophomore. Scored twenty goals and had sixteen assists as a freshman. Played club for Deportivo Fair Play.

Jamie Lamb – Defender – Auckland, New Zealand – Purdue Fort Wayne – Junior transfer from Purdue Fort Wayne where he started a total of thirty-six games during the 2018 and 2019 seasons. Played for the Dayton Dutch in USL2 in 2018.

Alec Nguyen – Midfielder – Tucson, Arizona – Pima Community College – Junior transfer from Pima CC where he played in forty-five games and scored fourteen goals and contributed eight assists over the past two years. Joined the program in the spring semester.