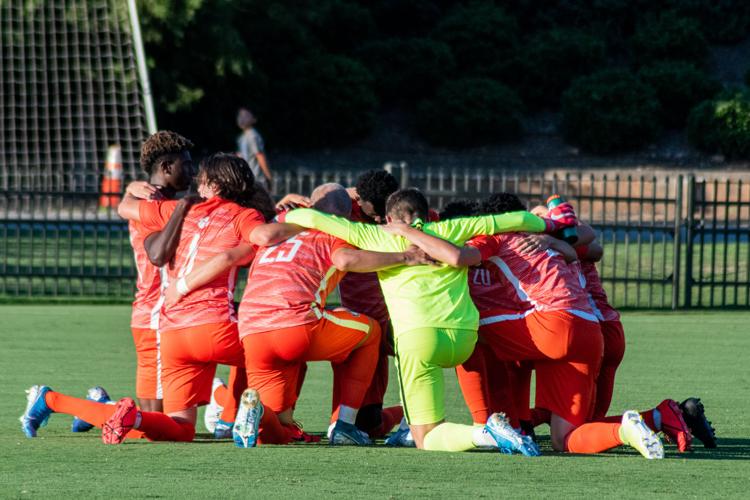 Clemson has some big shoes to fill but don't expect a drop off in the level of their play in 2020. The Tigers will again field a cohesive team with a fast paced multi-dimensional attack that will be difficult for opponents to contain and a defense that should be very stout.

Departures and Gaps – Clemson will be without the services of forward Robbie Robinson (18g, 9a) who elected to forgo his senior season to enter the professional ranks. Robinson was the winner of the prestigious MAC Hermann Trophy, a First Team All-America selection, the Atlantic Coast Conference Offensive Player of the Year, and the number one overall pick in the 2020 MLS Draft. Departures due to graduation include 2019 All-American defender Malick Mbaye (3g, 1a) who was the ACC Defensive Player of the Year and a four-year starter, midfielder Tanner Dieterich (3g, 10a) who was a 2019 All-ACC Second Team selection and four-year starter, and forward Adrian Nunez (3g, 4a) who had nine goals during his two-year tenure at Clemson.

Clemson is a top tier program with a team oriented mindset and winning culture under the guidance of head coach Mike Noonan. Regardless things can shift significantly between seasons in the highly competitive Atlantic Coast Conference where the level of parity makes the difference between a great season and a disappointing one very slim. Accordingly, any analysis of Clemson heading into the 2020 campaign has to begin with the fact that the Tigers have some big shoes to fill due to the departure of All-American forward Robbie Robinson, midfielder Tanner Dieterich who was a four-year starter, and All-American defender Malick Mbaye who was a four-year starter. All three were difference makers who played a key role in Clemson's eighteen win season and impressive 6-1-1 mark in Atlantic Coast Conference play.

While replacing them may not be easy, the overall talent level at Clemson looks to be just as good in 2020 as it was in 2019. In addition, the Tigers have added a recruiting class that will add depth and create competition for playing time which is always a good thing. From a personnel standpoint, Clemson has fewer unanswered questions than they did this time last year.

Robinson led the country with eighteen goals last year but Clemson was not a one-dimensional team offensively. The Tigers return enough firepower to again be very productive on the offensive side of the ball, maybe not 2019 productive, but nonetheless they will again have a very balanced and explosive attack. Simply put, Clemson will be a difficult team to contain in the attacking third. Senior All-American Kimarni Smith (13g, 5a) and sophomores Mohamed Seye (5g, 5a), James Brighton (6g, 2a) are all very capable finishers who fit in nicely with Clemson's fast paced attack oriented system of play. Sophomore forward Chris Matlashewski who took a redshirt season last year due to injury is among other forwards with the potential to add another dimension to the attack in 2020.

The midfield looks to be deep and talented. Sophomore playmakers Philip Mayaka (2g, 8a), a 2019 All-ACC First Team selection, and junior Grayson Barber (10g, 9a), a 2019 All-ACC Second Team member, are among returming midfielders who add additional punch to the offense. Juniors Felipe Fernandez (1g, 5a) and Quinn McNeill (1g, 0a) and sophomore Alvara Gomez (2g, 3a) are among other returning linkmen who played key roles last year. Juniors Stirling Russel (0g, 1a) and John Martin and sophomore Dylan Sullivan round out what looks to be a deep contingent of returning midfielders. Graduate Student Callum Johnson who transfers in from Boston College where he scored eight goals and contributed ten assists during three seasons is among the members of the recruiting class who should have an immediate impact in the midfield.

Clemson's fast paced style of play and their ability to push numbers forward depends on solid play and organization on the defensive side of the ball. The departure of Mbaye and Dieterich necessitates some reloading but with the talent returning in the back and in goal the Tiger defense should again be tough, physical and determined. Defenders senior Justin Malou (0g, 5a), a three-year starer, junior Charlie Asensio (0g, 1a), a two-year starter, and sophomore Oskar Agren (1g, 4a), a 2019 ACC All-Freshman Team selection, are among returning starters in the back. Sophomore Isaiah Reid is among other returning backs who look to be in the hunt for additional minutes in 2020. Junior George Marks, a 2019 All-ACC Second Team selection with a 0.91 goals against average in 2019, returns to give the Tigers a very capable, experienced and composed shot stopper between the pipes.

Clemson will again be up against a very tough slate of ACC opponents but there is much to like about the construction of the Tigers in 2020. The impact of the departures does inject some uncertainty heading into the season but with so much experienced talent returning, it is highly likely that Clemson will again be a contender for the ACC title and a high national ranking.