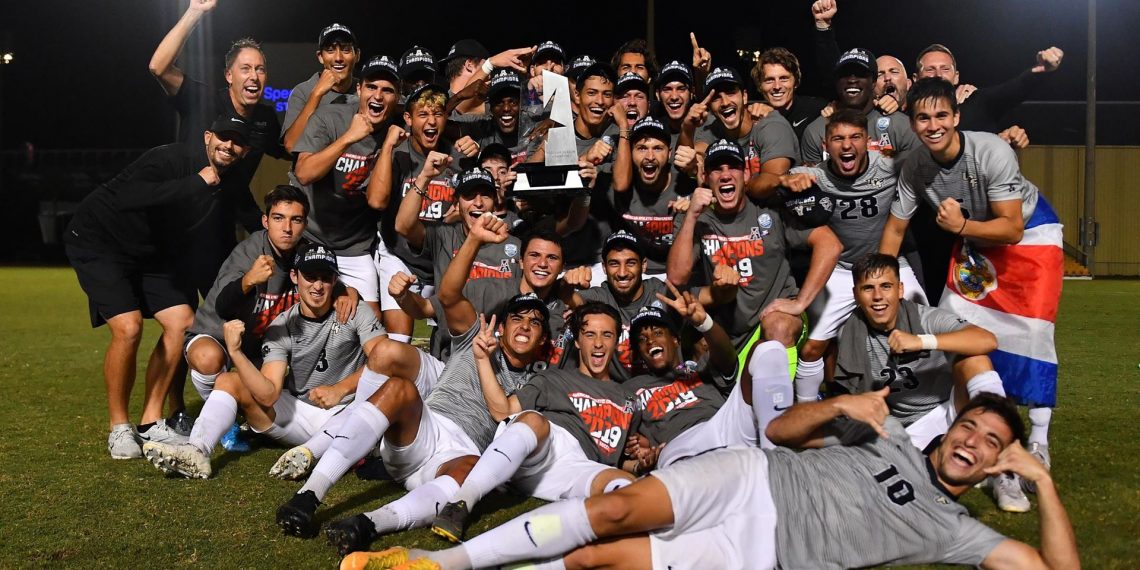 Scott Calabrese has been building the program at UCF, going from eight wins in his first season in 2017, to thirteen wins in 2018, to fifteen wins in 2019. It will be difficult to keep that trend up but this is a program that is clearly on the right path. Making a deeper run in the NCAA Tournament looks to be among the next steps.

Departures and Gaps – UCF will enter the season without three starters from the 2019 team. Departures due to graduation include two-time All-American forward Cal Jennings (18g, 4a) who had forty-six career goals including seventeen game winners and defender and team captain Jonathan Dean (0g, 6a). The Knights will also be without defender Glademir Mendoza (0g, 1a) who transferred in last year from New Mexico and was named to the 2019 All-AAC Rookie Team.

Opportunity for Improvement – Ten of UCF's contests last year went into overtime. The Knights did a really good job of closing out those contests with seven wins, two ties, and one loss (a 2-1 loss to SMU in the NCAA Tournament). However, they had difficulty at times closing out games in regulation allowing opponents to get back into contests after they had what appeared to be a commanding lead.

Summary – Eight starters including four All-AAC team members are back from the 2019 squad that was 15-3-2, won the regular season American Athletic Conference title with a 6-0-1 mark in league play, was awarded the number nine seed in the NCAA Tournament, advanced to the Sweet Sixteen for the first time in the history of the program, and was ranked as the number ten team in the nation in both the United Soccer Coaches and College Soccer News season ending polls.

The Knights were among the most productive teams in the country last year on the offensive side of the ball with a total of forty-four goals. The good news is that five of UCF's top six goal scorers who combined for a total of twenty goals are slated to return. The not so good news is that forward Cal Jennings who does not return was responsible for eighteen goals including seven game-winners. It's no secret that Jennings, who blossomed under Scott Calabrese's direction, played a key role in the Knights' attack the last three years as he developed the physical capacity needed to maximize his technical ability. The $64,000 dollar question at UCF heading into the 2020 season is who and how will the Knights fill the gap, specifically the big play ability, that Jennings provided?

Calabrese will have a lot of familiar faces at his disposal as he enters his fourth season at the helm of the program so he could address the void in part by adjusting the positioning of some of his players as he did when he moved Jennings from the wing to a striker his junior campaign. Regardless of the approach taken, if the void is successfully filled and team chemistry remains solid, this group will be dangerous.

Returning forwards include senior Hattabiou Barry (2g, 3a) who has been a starter for the past three seasons. Senior Richard Amon (0g, 2a) who appeared in eleven contests with four starts last year and sophomore Jonas Schmalbach (2g, 1a) are among other returning forwards who look to be in the mix. Newcomer Lucca Dourado out of the Montverde Academy is among the newcomers with the potential to add to the attack up top.

The midfield looks to be deep, experienced and talented. Junior Yoni Sorokin (5g, 5a), a two-year starter and the 2019 AAC Midfielder of the Year, is the guy who puts everything in motion for the Knights. Senior Louis Perez (4g, 11a), a 2019 Second Team All-AAC selection, is a three-year starter and the team leader in assists. Perez is a playmaker who has been an impact player since arriving on campus from France as a freshman in 2017. Sophomore Gino Vivi (5g, 8a), the 2019 AAC Rookie of the Year and 2019 College Soccer News First Team All-Freshman Team selection, adds yet another dimension to the attack. Junior Mauricio Villalobos Vega (1g, 3a) who was a starter in 2019, junior Thomas Ness (0g, 1a) and sophomore  Jeremy Di Lallo (1g, 1a) who is one of four players on the 2020 roster out of the Montverde Academy are among other returning linkmen who round out a UCF midfield that looks to be among the best in the country.

Some reloading is required in the back due to the loss of defenders Jonathan Dean and Glademir Mendoza. Junior backs Yanis Leerman (0g, 2a) a 2019 All-AAC First Team selection and junior Andres Hernandez Betancur (1g, 1a) return to provide a solid necleus upon which to build. Both have the benefit of two-years of starting experience. Senior Itzik Efraim who played in seven games last year with four starts and junior Gideon Adu-Peprah who saw action in eleven contests with one start are among other returning backs who will likely contend for additional minutes in 2020. Freshman Owen Guske, out of the Orlando City Academy, is among several defenders in the recruitings class who should add depth in the back.

Senior Yannik Oettl, the AAC Goalkeeper of the Year for the past two seasons, returns to give the Knights an imposing and experienced shot stopper in goal. Oettl started every contest in 2019 and recorded a 1.14 goals against average and six shutouts. Redshirt sophomore Matt Douglass from Clearwater, Florida out of the Montverde Academy and sophomore Bernardo Brandao from Rio De Janeiro, Brazil out of the IMG Academy also return between the pipes.

UCF has a big void to fill on the offensive side of the ball but all things considered they look to be a program on solid ground with the expereince, athleticism, talent, and depth needed to build on the success they had last year.