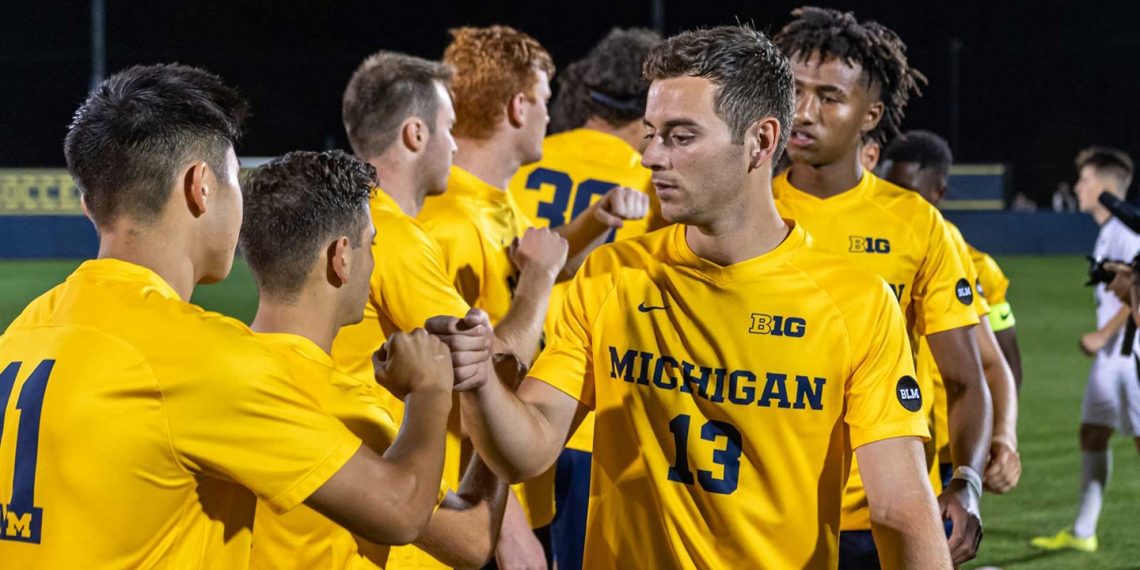 The Wolverines Are Coming Off an 8-7-3 Season During Which They Were Hampered By Injuries.

Austin Swiech – Defender – Appeared in a total of 69 contests with 53 starts over five seasons. Had one career goal and seven career assists. A starter for four seasons.

Avoidance of the injuries that hampered the consistency of play and necessitated a different starting lineup every contest.

Chaka Daley stated, “Michigan men’s soccer is excited to welcome these eight outstanding young men to our program. They are not only potentially great student-athletes, but they will undoubtedly be tremendous ambassadors for our program, staff and University. We are fortunate to have attracted young men that come from varying backgrounds, excellent soccer environments, but more importantly are hungry and passionate about representing Michigan.”

Michigan returns a talented and deep contingent up-top and in the midfield despite the departure of long term contributors midfielder Marc Ybarra who played in 91 contests with 90 starts and forward Farouk Umar Osman who played in 87 games with 75 starts during five seasons. As a result Coach Daley will have a lot of different lineup options.

Seniors Evan Rasmussen (2g, 2a) who played in 16 games with 13 starts last year and Derick Broche (3g, 1a) who appeared in 14 contests with 5 starts are among returning players who Daley will likely look to for firepower up-top. Senior Christian Pulselli who appeared in 13 contests in 2021 with 2 starts and sophomore Michael Leon who played in 12 games with 3 starts are among other returning players who look to be in the mix up-top. Freshman forward Nick Kaloukian is among several members of the recruiting class who could add to the offense up-top and be in line for early playing time.

Graduate student Kevin Buca (5g, 2a), a two-year starter and the team’s leading goal scorer last year, and 5th year senior Cameron Martin who played in 12 games with 4 starts in 2021 are soccer savvy and experienced players who will set the pace in the midfield. Senior Inaki Rodriguez (1g, 4a) is a talented and tenacious box-to-box midfielder who will have the opportunity to play a greater role and help fill the void that exists due to the departure of Marc Ybarra. Junior Bryce Blevins (0g, 2a) and senior Uriel Zeitz (2g, 0a) who missed a large portion of the 2021 season due to injury but is now healthy are among other returning midfielders who look to be in the mix.

Sophomore Hayden Evans, a 2021 Big Ten All-Freshman selection who started 13 games last year with a 1.26 goals against average, returns as the front runner to anchor the defense in goal. The experience that Evans gained last year reduces the uncertainty at the sports most important position.

Junior Quinn Rogers (1g, 1a) who has two seasons of starting experience under his belt will play a key role on the defensive side of the ball either as a holding midfielder or center back. Sophomore Jason Bucknor (0g, 2a), a 2021 Big Ten All-Freshman selection with a year of starting experience under his belt, and senior Moshtaba Al-Hasnawi who played in ten contests last year are among returning backs with the ability to push forward and add an additional dimension to the attack.

Seniors Ryan Schultz (1g, 1a) who was a starter last year, Declan Gaffney (1g, 2a) who played in 16 games with 10 starts, Brennan Callow (2g, 0a) who played in 11 contests with 9 starts in 2021 and Harry Pithers who played in 7 games with 5 starts last year but missed most of the season due in injury also figure to play prominent roles and strengthen the defense in the back in 2022.

Defenders Nolan Miller and Niklas Dossmann are among the newcomers who have the competitive experience and the athleticism to be in the hunt for playing time early on.

Adversity in one season often proves to be a spring board for success the following season. Last year Michigan had a ton of injuries which resulted in numerous lineup changes. The good news is that provided the opportunity for a lot of players to gain valuable playing time.

Things might have been different last year had there not been so many injuries and a little more stability but that’s past history now. Daley and his staff know the areas where improvement must occur in order for Michigan to contend for a Big Ten title and return to the NCAA Tournament field after a two year absence. The Wolverines ceiling in 2022 will hinge on the ability of the returning players to take their game to a higher level based on the lessons and experience gained last year, the level of contribution of the newcomers, and the ability of the coaching staff to sort out the lineup and combinations that will maximize performance.

Inexperience and the inability to consistently put together a complete ninety minute shift were weaknesses last year at Michigan that may very well manifest as strengths in 2022. There are no easy games in Big Ten play but the schedule is favorable in that Michigan will face Big Ten foes Maryland, Indiana, Ohio State and Penn State at home. The Wolverines have some work to do but if everything falls into place the potential exists for the 2022 season to be an exciting one in Ann Arbor.