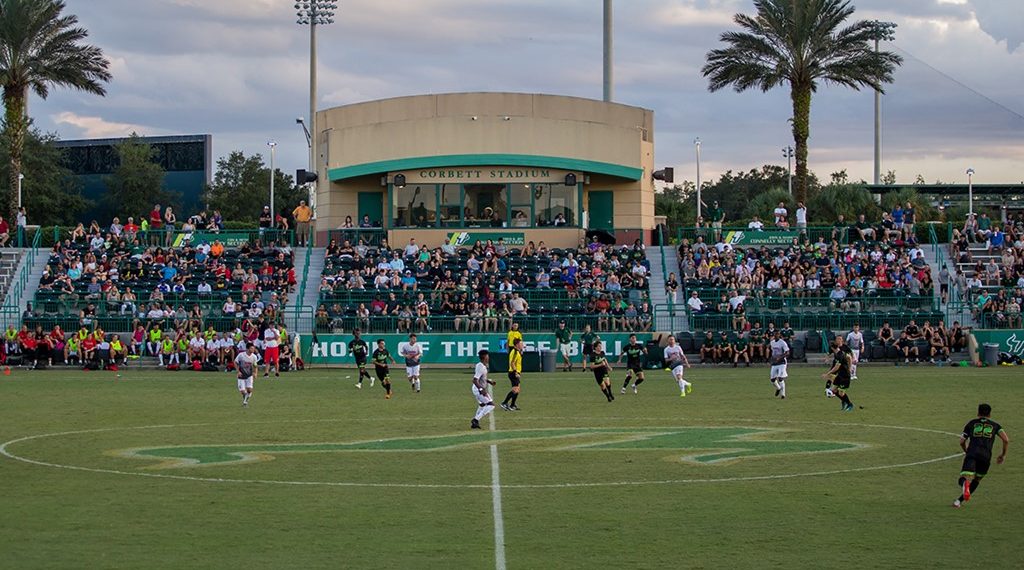 A Young South Florida Team Struggled Early On In 2021 But Began To Jell Down The Homestretch Of The 2021 SEason.

Henrique Gallina – Midfielder – A multi-year starter who was the Bulls top goal scorer during the 2021 season with five goals and three assists. Appeared in 12 games in 2021 with eight starts. Appeared in a total of 50 games with 43 starts during four seasons.

Richard Laval – Midfielder – A multi-year starter who appeared in 15 games with 13 starts in 2021. Appeared in a total of 48 games with 25 starts over four seasons.

Gordon Phipps – Defender – Appeared in eight games with three starts in 2021 season. Played in a total of 37 games with 7 starts over four seasons.

Marcus Murphy – Defender – A three-year starter who missed the 2021 season due to injury. Played in 40 games during three seasons with 39 starts.

A lot of freshmen played key roles last year for South Florida. The experience the current sophomores gained provides the opportunity to enhance the consistency of their play in 2022.

Improvement on the defensive side of the ball is needed in order for the Bulls to have a chance to move upward in the AAC hierarchy in 2022. Last year South Florida allowed three or more goals in four of their five losses in conference play. During their five conference losses they allowed a total of 21 goals while scoring a total of four times.

Bob Butehorn will have a lot of lineup options up-top and in the midfield. The Bulls will depend on a lot of younger players for offensive productivity but there is much less uncertainty heading into the 2022 season than there was the 2021 season due to the experience the younger players gained last year and the fact that they are better prepared to survive the rigors of college soccer.

Sophomore Shion Soga (3g, 4a), a 2021 AAC All-Conference First Team selection who appeared in 14 games with 8 starts in 2021 and 10 games with 9 starts in 2020 (spring 2021) returns to add punch to the attack in the midfield along with senior Gabrielle Privitera (2g, 1a) who transferred in last year from Barton Community College where he was a NJCAA All-American. Both Soga and Privitera are crafty attacking midfielders with big play ability. Privitera was limited to only six games last year due to a knee injury. A healthy Privitera could prove to be a difference maker for the Bulls in 2022.

Sophomore forwards JT Cooper (3g, 3a) who started 12 contests during the 2021 season and nine during the 2020 season (spring 2021) and Josh Gomina (0g, 2a), a 2021 AAC All-Rookie Team selection, will add an additional dimension to the attack. Both have the ability to attack down the flank, open the field of play, and create seams that can be exploited. Sophomore Oscar Resano (3g, 2a) is an athletic and physical forward who will add another element to the offense. Sophomores Segun Afolabi (2g, 1a) who started nine games in 2021, Andres Freire (3g, 0a) who appeared in 14 games with two starts and Marcus Victorio who played in four games with one start are among other returning forwards with the potential to add sizzle and factor into the offense.

Sophomores Donovan Hesselmeyer (0g, 1a) who started 13 games in 2021, Joergen Thue Kristiansen, and Julio Plata are among other returning midfielders who have a good feel for the game and will contend for a greater role in 2022.

Sophomore Ralph Montero who played in eight games last year with seven starts and redshirt senior Jackson Weyman who played in one contest last year after transferring in from Marquette return in goal.

Junior Salvatore Mazzaferro, a three-year starter and two-time AAC All-Conference Second Team selection returns to anchor and set the pace in the backline. Sophomore center back Brian Schaefer, sophomore Nicolas Scargle, sophomore Ben Kaplan and junior Sergio Pineros-Mayorga are among other returning backs who will figure in the mix. Junior center back Luca Hollenstein who transfers in from Lubbock Christian University is among the members of the 2022 recruiting class who could compete for minutes.

Much will hinge on the degree to which the year of experience the returning players gained last year enables them to collectively avoid the miscues, soft goals, and lapses in play on the defensive side of the ball that hampered South Florida at times last year.

It only takes a cursory review of South Florida’s roster and statistics to establish that the Bulls had to lean heavily on freshmen last year and that a big factor in the level of success they will have in 2022 will depend on the extent to which the experience they gained improves the level and consistency of their play.

It is worth noting that the Bulls had high expectations and looked to be a legitimate contender for the AAC title following a very productive 11-7-1 2019 season during which South Florida was awarded a berth in the NCAA Tournament. However, a perfect storm of sorts due in large part to unexpected departures and a rash of injuries placed Bob Butehorn and the Bulls in rebuild mode in 2021 and an oh-so-young South Florida squad faced an extreme makeover that resulted in significant growing and get-to-know you pains. The result was a 4-6-0 spring 2021 season and a 6-7-2 2021 fall season.

The good news is that the Bulls look to have weathered the storm and the fact that they rebounded from a 2-6-1 record to go 4-1-1 down the home stretch of the 2021 season is a positive sign that better days are ahead. Butehorn has added a promising recruiting class and added a new dimension to his coaching staff by bringing on board former South Florida midfielder Armante Marshall who was previously on the staff at Temple and Billy Chiles who was previously on the staff at George Mason as assistant coaches.

The talent and experience are on board for a higher ceiling at South Florida in 2022 than in 2021. The Bulls didn’t begin to scratch the surface of their potential until the later part of the 2021 season. Many of the faces will be the same in 2022, but the results should be better. At the top of the to-do list is improving the defense. An important element in that will be an attack that can consistently apply the type of pressure needed to keep opponents from pushing numbers forward.

Sophomore Shion Soga and senior Gabrielle Privitera look to be among the catalysts and key playmakers on the offensive side of the ball with sophomores JT Cooper, Oscar Resano and Josh Gomina among the likely candidates to add balance to the attack. Backs Salvatore Mazzaferro and Brian Schaefer are among those who will set the pace on defense. The play in goal is a key critical success factor in 2022.

Butehorn did a good job of navigating South Florida through a difficult rebuild season during which the Bulls faced the challenges that accompany inexperienced teams. While improvement is likely in 2022, cautious optimism is warranted. A double digit win season and a serious run at the AAC title may be a year away.

South Florida faces a very challenging early season schedule that includes difficult non-conference contests with North Carolina and Marquette on the road and home contests with Washington and Mercer. Those games will serve as a measuring stick of the level of improvement. The Bulls then face the gauntlet of AAC play where the gap that existed last year between the Bulls and the frontrunners in the AAC must be closed in order for significant upward movement to occur.

Takeru Moriyama – Midfielder – Tokyo, Japan – Transfer from Cowley College where he was an NJCAA All-American. Played in 31 games with 30 starts. Scored two goals and contributed five assists during two seasons at Cowley.

Ajmeer Spengler – Midfielder – Tampa, Florida – Tampa Catholic High School – Junior transfer from Stetson where he played in a total of 32 games with 17 starts during two seasons. Scored six goals and contributed two assists during the 2021 season.

Bryson Dodd – Goalkeeper – Raleigh, North Carolina – Sophomore transfer from Southern Wesleyan University where where he played in and started six contests in 2021.