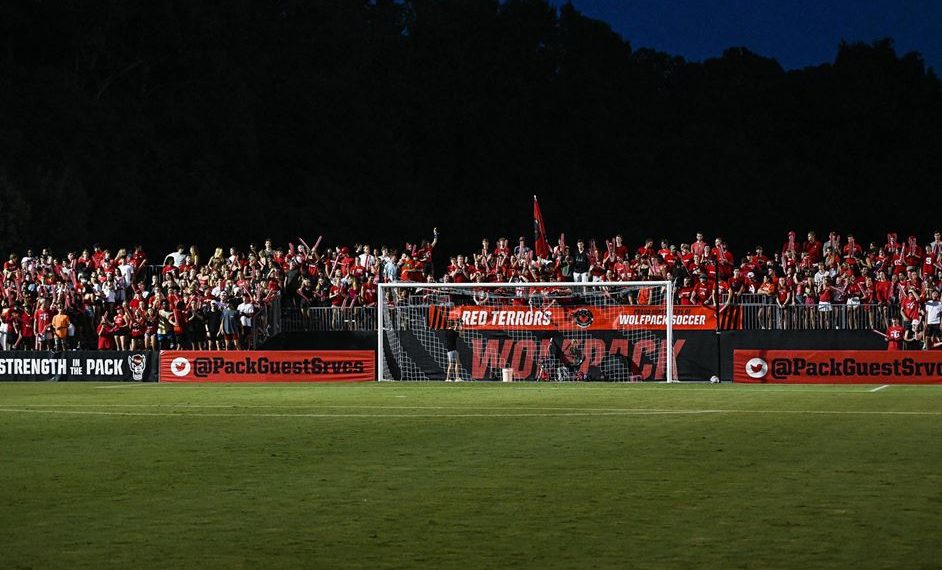 Leon Krapf – Goalkeeper – Played in 17 games with 17 starts his senior season. A four year starter who played in a total of 70 games with 70 starts.

Alex Hernandez – Midfielder – Played in 13 contest with 11 starts his senior season. Played in a total of 23 games with 14 starts during two seasons after transferring in from Appalachian State.

Jamie Smith – Defender – Played in 15 games with 14 starts as a graduate student in 2021 with three goals all coming out of free kicks. A three year starter who appeared in a total of 46 games with 42 starts after playing in two seasons for Limestone College.

Ivy Brisma – Forward – Appeared in 16 games with seven starts his senior season with one goal and four assists. A four year starter who played in a total of 68 games with 52 starts during which he scored five goals and contributed eleven assists.

AJ Seals – Midfielder – Appeared in 17 contests his senior season with 13 starts. Contributed two assists. Played in 32 games with 26 starts over three seasons with a total of three assists.

Brad Sweeney – Midfielder – Played in 16 games with 15 starts as a graduate student. Played in a total of 78 games with 67 starts over five seasons with five career goals and five career assists.

Jose Morales Jr. – Midfielder – Played in three games his senior season. Appeared in a total of 37 games with 20 starts over four seasons.

Offensive productivity in conference play. The Wolfpack scored a total of 25 goals in 2021. A total of 21 of their 25 goals were scored against non-conference opponents.

NC State performed well last year when they were able to settle to a rhythm on the offensive side of the ball that enabled them to maintain possession, switch the point of attack, and create seams that they could exploit. However they were unable to do that on a consistent basis and lacked the big play ability at times that they needed to prevail.

The Wolfpack will miss the explosive play of forward Kuda Muskwe among others but return a contingent of young and enthusiastic players with the potential to collectively put a little more oomph in the attack in 2022. Sophomore midfielders Luke Hille (6g, 1a), the Packs top goal scorer last year and Noe Cabezas (1g, 4a) and forward Henrique Santos (1g, 2a) are among the returning players who will likely be counted upon for offensive punch.

Graduate student transfer midfielder Conor Kelly from Duke and junior transfer Junior Nare from LaSalle along with freshman midfielder Calem Tommy look to be among several members of the 2022 recruiting class who could add to the attack.

Senior midfielders Aidan Foster (2g, 0a) who has played in 61 games with 26 starts with five goals and one assist, and sophomore midfielders Yaniv Bazini (2g, 2a), Will Buete and Vusumzi Plamana and senior forward Jared Miller are among other returning players who look to be in the mix for a greater role in 2022.

The departure of Leon Krapf who was a four year starter in goal creates the biggest unanswered question that must be addressed on the defensive side of the ball. Senior Winham Ellis who appeared briefly in two contests last year and sophomore Lucas Hatsios look to be the most likely candidates to assume the starting role in 2022. Junior David Merola and sophomore Tyler Perrie are among other returning netminders.

The departure of backs Jamie Smith (3g, 0a) who was a three year starter and Pepe Garcia (0g, 1a) who was a four year starter also creates a talent and experience void that must be filled on the defensive side of the ball. Seniors Pablo Pedregosa, a three year starter, Kendal Edwards who has appeared in 31 games with 17 starts over the past three seasons, Cam Murray (0g, 1a) who was a starter last year after transferring in from Monroe College and Alex Bautista who has appeared in 33 matches with 11 starts over the past four seasons and sophomore Jarvis Cleal who appeared in one game last year provide a solid nucleus upon which to reload the back line.

George Kiefer will enter his sixth season as the NC State head coach with an energetic team that includes a good mixture of older and younger players. The Pack will depend on a lot of younger players and several experienced transfers for playmaking ability on offense in 2022. Much will depend on whether or not a talented group of sophomores that includes Luke Hillie, Henrique Santos and Noe Cabezas among others get the bump in play that often occurs between the freshman and sophomore seasons.

There is a huge void to fill in goal and and several very experienced backs to replace on the defensive side of the ball which also creates unanswered questions. The good news in that regard is that a solid contingent of senior backs led by Pablo Pedregosa and Kendal Edwards are slated to return along with several younger players who look to be ready and eager to assume a greater role in 2022.

NC State looks to be a very motivated and hungry team heading into the 2022 season and you can bet the farm that Kiefer will field a team with a hard working blue collar work ethic which is a plus. The Pack return some nice pieces from the 2021 team but it will take improvement on both sides of the ball in order for NC State to increase its win total and return to the NCAA Tournament field after being absent the past two seasons.

Last year, with the exception of a 4-0 loss to rival North Carolina in Chapel Hill and a 2-0 loss to eventual national champion Clemson, the Pack played everyone close but Kiefer and his staff are way beyond settling for moral victories. During Kiefer’s first three seasons at the helm of the program from 2017 to 2019 the Wolfpack exceeded expectations when they earned a berth in the NCAA Tournament for three consecutive seasons for the first time since 1985-1987.

The Wolfpack have a competitive but manageable non-conference slate of opponents in 2022. They open the season with contests at home against Loyola Maryland and Wofford and then face Radford and Mercer on the road. NC State can’t afford to look past any of their non-conference contests and need a good start to the season to gain momentum and merge together as a team. The first four games of the season will provide an indication of how well all the pieces are going to fit together.

The Wolfpack begin ACC play on September 10 against Wake Forest in Winston Salem. Whether or not the Pack will be back in 2022 will ultimately come down to their ability to improve their win total against ACC opponents.

Conor Kelly – Midfielder – Rumson, New Jersey – Christian Brothers Academy – Graduate student transfer from Duke where he played in 19 games with six starts in 2021. Scored a goal and had one assist at Duke in 2021. with . Appeared in 45 games with 12 starts during four year tenure at Duke. Played club soccer with Cedar Starts Academy Monmouth. Joined N.C. State during spring season.

Junior Nare – Forward – Johannesburg, South Africa -Edenglen -Junior transfer from LaSalle where he played in 16 games with 14 starts and scored six goals and contributed one assist in 2021. An Atlantic 10 All-Rookie Team selection. Played on South African U-17 and U-20 National Teams. Played for Bidvest Wits FC Youth Academy and Black Aces Youth Academy.