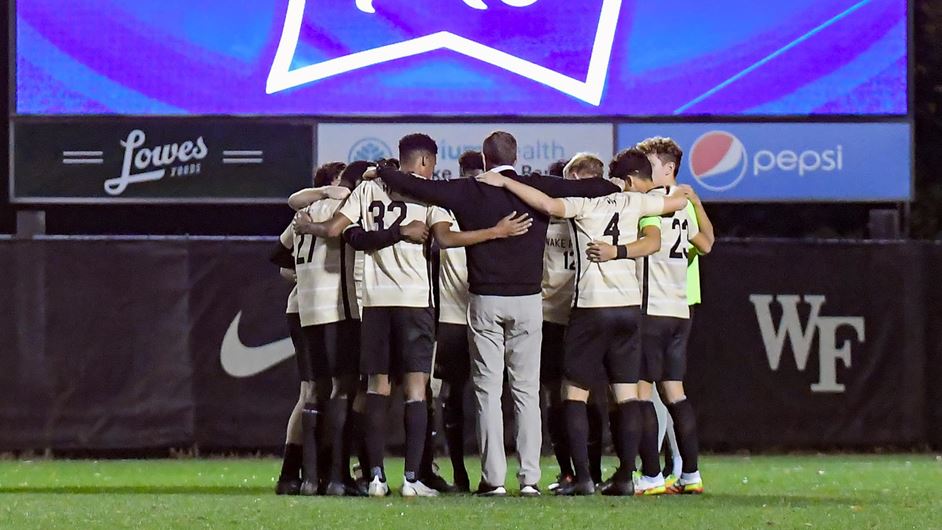 Eight Starters and A Solid Group of Players Who Earned Significant Minutes Last Year Are Slated To Return In 2022.

The Demon Deacons will be without All-American forward Kyle Holcomb and defenders Nico Benalcazar and Holland Rula.

Holcomb led the Demon Deacons in scoring in 2020 and 2021. He completed his tenure at Wake Forest with 33 career goals and eight career assists.

Benalcazar signed a Homegrown Contract with the New York City FC at the conclusion of his junior year. He was a three-year starter and All-ACC selection in 2020 and 2021.

Rula was a three-year starter and important part of Wake Forest’s backline.

The graduation of forward Kyle Holcomb (12g, 4a) who was Wake Forest’s top goal scored in 2020 and 2021 with 33 career goals and 74 career points means the Demon Deacons will enter the 2022 season without an established go-to goal scorer up-top. Holcomb’s impact is reflected in the fact that Wake Forest was 10-1-0 in 2021 when he scored a goal. Returning forwards include senior David Wrona (0g, 1a) who has appeared in 48 contests over the past three seasons and sophomores Julian Kennedy (3g, 1a) and Roland Mitchell (5g, 2a).

The Demon Deacon midfield looks to be a team strength with a talented, deep and now experienced contingent of midfielders slated to return led by seniors Omar Hernandez (5g, 3a) and Jake Swallen (5g, 6a) who were 2021 All-ACC Third Team selections and Takuma Suzuki (0g, 3a) who has been a starter the past two seasons. Juniors Chase Oliver (4g, 4a), Colin Thomas (1g, 2a) and Oscar Sears (1g, 2a) and sophomores Babacar Niang (1g, 3a), Ryan Fessler, Leo Guarino (1g, 1a), Nicolas Mancilla (0g, 1a) and Mwinso Denkabe are among other returning midfielders who earned significant minutes last year and will be eager to make a contribution in 2022.

Hernandez, Swallen, Wrona and Oliver who combined for a total of 14 goals in 2021 are among returning players who Bobby Muuss will count on for offensive punch in 2022 but the X-Factor and punch on the offensive side of the ball could come from the likes of sophomores Mitchell, Kennedy, Niang and Denkabe.

The Demon Deacons look to be on solid ground between the pipes with sophomore Trace Alphin who started 16 contests last year and redshirt junior Cole McNally who had nine starts in 2020 and six starts in 2021 after sustaining an early season injury returning in goal.

The graduation of Holland Rula and the early departure of Nico Benalcazar to enter the professional ranks leaves a void in the back. Both were three-year starters. However, a drop-off is not expected with an impressive group of defenders led by juniors Garrison Tubbs (1g, 5a), Hosei Kijima (1g, 5a), Prince Amponsah (0g, 2a), Jahlane Forbes (1g, 3a) and Cristian Escribano slated to return along with sophomore Bo Cummings (0g, 1a) and senior Sebastian Schrivner among others.

One of the primary drivers of the excellence and consistency of the program at Wake Forest has been the annual arrival of a group of talented newcomers with the ability to contribute but who also have the opportunity to grow into roles of greater responsibilities in a team oriented culture which is passed down from the older to the younger players.

The Deacons fielded a much younger team beginning with the start of the unprecedented spring 2021 season and during the traditional 2021 season than in the past due to graduation and early departures to enter the professional ranks. A young Demon Deacon team exceeded expectations in the 2021 spring season by advancing to the Elite Eight but they experienced a learning curve during the first half of the traditional 2021 season that impacted their play and ability to settle in as a team. In other words, last year a lot of young players had to assume ownership of their roles very quickly. However, Wake Forest did mature and improve as the season progressed earning a berth in the NCAA Tournament and topping Mercer and FIU to advance to the Sweet Sixteen.

The experience a young Wake Forest team gained last year and the addition of a recruiting class with the skill set needed to fit into their system of play should enhance the level of consistency on both sides of the ball going into the 2022 season. However they remain a team with only a few seniors (Hernandez, Swallen, Wrona, Suzuki and Scrivner) on the 2022 roster.

A solid contingent of experienced players return to anchor the defense but the development of a multi-dimensional attack may depend in large part on the development of the sophomores. It is a plus that twelve players who scored last year return including four players (Swallen, Hernandez, Mitchell and Oliver) who scored four or more goals but the unanswered question remains who will emerge to fill the gap that exists due to the loss of Holcomb who completed his tenure in Winston-Salem as the Deacons all-time eighth leading goal scorer. The answer may be offense by committee in 2022 rather than one dominant goal scorer.

A lot of Wake Forest players earned minutes last year which means that Bobby Muuss and his staff will have a lot of talent and lineup options heading into the 2022 campaign.

Wake Forest has an international trip to England in March and a very competitive slate of opponents scheduled for the spring season that will provide the seasoning this team needs to produce improvement and gel on both sides of the ball. If everything falls into place Wake Forest will be a very tough and deep opponent to face in 2022 with a team chemistry in which the whole is greater that the sum of the individual parts.

Samuel Jones – Midfielder – Portsmouth, Virginia – Played with the Philadelphia Union II. Received a call-up to the U17 USYNT. Called-up to the U20 USMNT reserve team. Enrolled in January.

Vlad Walent – Defender – Lafayette, Colorado – Played for the Colorado Rapids Academy. Played with the Colorado Switchbacks in the USL Championships.

Nicholas Rabiu – Midfielder – Schenectady, New York – Played for the New York Red Bulls’ Academy. Played with the Red Bulls II of the USL. Called up to the Ecuador U-17 National Team.