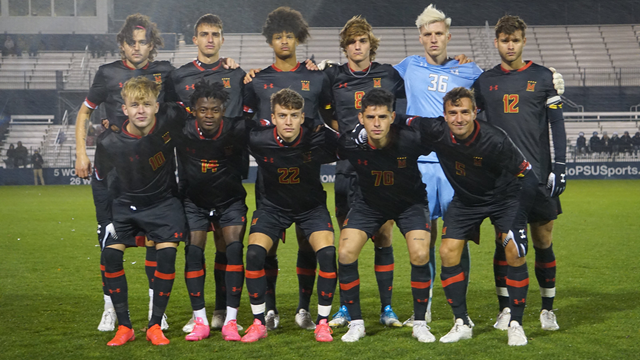 Terps Will Enter the 2022 Season With Their Sights Set on Building On A very Productive 2021 Season During Which They Had The Personnel Needed to Do A Much Better Job Of Putting Their Opponents Under Pressure Without Leaving Themselves Vulerable On The Defensive Side Of The Ball.

Midfielder Ben Bender and forward Jacen Russell-Rowe elected to enter the professional ranks at the conclusion of their sophomore seasons. Departures due to graduation include right center back Brett St. Martin and forwards Justin Gielen and Bryan Padilla.

Bender (7g, 5a) was a 2021 All-American and the Big Ten Defensive Player of the Year. Bender signed a Generation adidas contract and was the number one overall pick in the 2022 MLS SuperDraft.

Russell-Rowe (2g, 5a) appeared in 18 matches with 12 starts in 2021. He played in eight contests with six starts during the abbreviated 2020 season and was named to the Big Ten All-Freshman Team.

Brett St. Martin (0g, 1a) was a four-year starter and team captain. He was an All-Big Ten First Team selection in 2021 and All-Big Ten Second Team member in 2020.

Gielen (2g, 0a) appeared in 58 games during his four-year tenure at Maryland with 8 career goals and 3 career assists.

Padilla appeared in 42 contests with 22 starts during his four-year stay in College Park. He had 4 career goals and 3 career assists.

The inability to close out games and to finish the opportunities to score that came their way resulted in a disappointing finish to the 2021 season.

Maryland fell to Penn State 3-2 during their next to last regular season game after jumping out to a 2-0 led. The Terps rebounded to top Indiana 2-0 but were subsequently eliminated from the Big Ten Tournament when they were topped by Northwestern (a team that the Terps defeated 3-1 during regular season play) in the quarterfinals of the Big Ten Tournament in a contest that was decided by a penalty kick shootout when it was scoreless after 110 minutes of play.

A very promising season subsequently came to an unexpected and frustrating end for Maryland in the first round of the NCAA Tournament when they were unable to put together the combinations needed to break through a packed in LIU defense and the Sharks shocked the Terps with a late goal of their own to secure a 1-0 win in College Park.

Sasho Cirovski stated, “Our 2022 class has all the attributes we look for in our players, skill and drive on the field and great work ethic off it. This class has a distinct local flavor that highlights the quality of soccer in our region.”

The loss of midfielder Ben Bender (7g, 5a) who was Maryland’s go-to guy in 2021 and the departure of Jacen Russell-Rowe (2g, 5a) leaves a void in the attack.

Redshirt sophomore Joshua Bolma (4g, 4a), the Big Ten Freshman of the Year and an All-Big Ten First Team selection, is and explosive finisher who will enter the 2022 season with the advantage of a year of starting experience under his belt. Ditto that for sophomore Caden Stafford (3g, 2a) who was a 2021 All-Big Ten Freshman Team selection. Seniors George Hunter (1g, 1a) and Justin Harris (1g, 0a) are among among other returning players who will figure prominently in the attack. Redshirt freshman Marcus Garcia, the 2020-2021 Gatorade New Mexico Boys Soccer Player of the Year, is among others who could be in the mix up top.

Senior Malcolm Johnson (2g, 1a), a team captain and box-to-box midfielder, and redshirt senior holding midfielder Nick Richardson (0g, 2a), who may also be utilized in the back, return to anchor the center of the park for the Terps. Both are talented, experienced, and hard working midfielders who will set the pace for the team.

Sophomores Griffin Dillon (0g, 1a) and Richie Nichols, junior Joe Suchecki (0g, 1a) and senior Jacob Chakroun are among other returning linkmen who will be in the hunt for a greater role in 2022. Midfielder Dalton Hass who served a redshirt season last year is among others who will compete for minutes in 2022.

Maryland is known for their ability to come out on the front foot and put their opponents under pressure but the difference between the the good and the best Terp teams has always been their play on the defensive side of the ball. For example, the 2018 team that had an amazing run to win the National Championship was anchored in goal by Dayne St. Clair and a tenacious back line led by Donovan Pines that did not allow a goal during 450 minutes of play in the NCAA Tournament.

Senior Nicklas Neumann, a 2021 All-Big Ten Second Team selection, with multiple years of starting experience returns in goal to anchor the defense along with junior Jamie Lowell. Both are very capable and composed netminders.

Junior Alex Nitzl (0g, 1a), a rock solid three-year starter, returns in the back along with senior center back Chris Rindov (2g, 2a) who led the team in minutes played last year. Sophomore William Kulvik (0g, 1a), a 2021 All-Big Ten Freshman Team selection who had an impressive rookie season, and junior Kento Abe who appeared in nine games in 2021 with four starts are among other returning backs who should play key roles.

The fact that Maryland has earned a berth in the NCAA Tournament for 21 consecutive seasons under Sasho Ciroviski and won the national championship three times including the 2018 season speaks for itself. Regardless, in 2019 and 2020 the Terps were unable to effectively or consistently execute the pressure oriented style of soccer that made them such a dangerous opponent to face.

The Terps needed to turn the corner in 2021 and they did. In 2021, Maryland had the talent and experience needed on both sides of the ball to come out on the front foot and put their opponents under pressure. The result was a 12-4-2 overall season with a 5-2-1 mark and number two finish in Big Ten regular season play. The Terps averaged 14.2 shots per game as compared to 8.5 for their opponents. Maintenance of that shot advantage in 2022 while doing a better job of finishing their opportunities in the final third and closing out contests with a full 90 minute shift are among the critical success factors for Maryland in 2022.

Ciroviski, one of only a small number of coaches with over 400 wins at one school, and his staff will have a lot of talent to work with supplemented by several newcomers with the potential to contribute valuable minutes. The biggest unanswered question looks to be the emergence of a go-to goal scorer or two to add punch to the attack.

The toughness and the leadership that Brett St. Martin brought to the backline will be missed but the personnel looks to be on board for what should be a solid Terp defense.

Maryland is among those programs that often have early departures to enter the professional ranks. That is a good thing for a program and a nice problem to have but it can make it more difficult to anticipate voids and it often creates a learning curve and impacts depth. However, it is always wise to fear the turtle when the combined number of departures due to graduation and early exits to enter the professional ranks is not excessive. Improvement is needed for continued improvement, but the potential exists in 2022 for the Terps to contend for the Big Ten title and standing on the national scene.