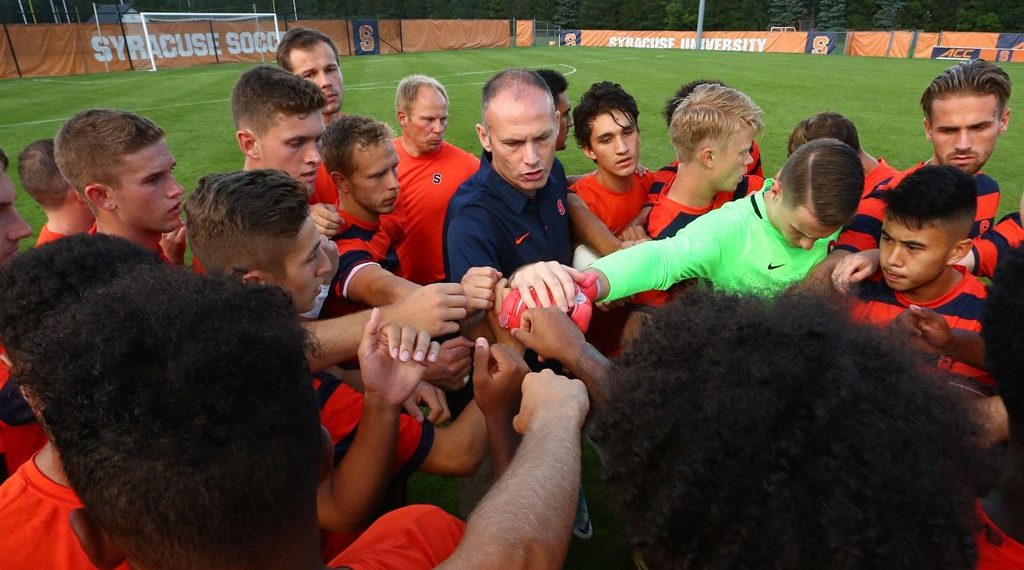 The Orange have added a technically sound and athletic group of newcomers including several experienced transfers to a necleus of returning players who are eager to embrace a greater role in 2019.

Departures and Gaps – Syracuse must fill the void that exists due to the departure of a talented seven member 2018 senior class that included goalkeeper Hendrik Hilpert who was a four-year starter, defenders Kamal Miller (0g, 1a) who was a four-year starter and Len Zeugner (2g, 1a), and midfielders  Hugo Delhommelle (0g, 6a), Jonathan Hagman (3g, 0a) and Jan Breitenmoser (0g, 1a). The Orange must also fill the gap that exists due to the decision of forward Tajon Buchanan (8g, 4a), a 2018 All-ACC First Team selection, to enter the professional ranks at the conclusion of his sophomore season. Buchanan was the ninth overall pick in the 2019 Major League Soccer SuperDraft.

Coach's Recruiting Class Comment – Coach McIntyre stated, "It is wonderful to welcome this exciting group into our Syracuse soccer family. It is a talented group of young men of the highest character, who have each succeeded on the soccer pitch and in the classroom. I cannot wait to get to work with this group and quickly integrate them into our program."alroup Ian

Summary – At first glance it appears that 2019 will be a rebuilding year at Syracuse. The Orange will be without a 2018 senior class that during their tenure led Syracuse to an ACC Championship, three NCAA Tournament appearances and the program's first trip to the College Cup. They also have to replace the firepower that forward Tajon Buchanan provided.

The Orange will enter the year with a lot of unanswered questions which will likely result in growing pains in the early going. But there is also is plenty to like heading into the 2019 campaign. So, will 2019 really be a rebuilding year at Syracuse?  Not necessarily.  Much may depend on on the ability of the newcomers and the younger returning players to help fill the voids and fit into Syracues's system of play. The Orange had a solid spring season against a very competitive slate of opponents. It is also noteworthy that McIntyre has done a lot in the past with less talent than he has on the 2019 roster. It may take a little time to piece the team together but a lengthy adjustment period is not likely. The talent level and athleticism at Syracuse measures up just fine with most of the teams in the highly competitive Atlantic Coast Conference so the potential exists for the 2019 squad to compete at a very high level.

Senior Massimo Ferrin (5g, 2a) who had a great spring season and was a starter last year returns to power the attack up top.  Senior Severin Soerlie (3g, 1a) also returns to add an additional dimension to the offense up-top. Soerlie's playmaking ability could prove to be the X-Factor in Syracuse's offense. Luther Archimede whose resume includes playing with the Guadeloupe National Team is among the members of the recruiting class who could compete for minutes up-top early on.

Sophomore midfielder Ryan Raposo (4g, 7a) who was an ACC and College Soccer News All-Freshman Team selection last year adds another ingredient to the offense. Raposo is an impact player whose quickness and touch on the ball make him a difficult player to contain in the attacking third.  Junior Simon Triantafillou (1g, 1a) who has appeared in thirty-three contests over the past two seasons and sophomores Julio Fulcar (1g, 1a) and Hilli Goldhar (2g, 5a) who gained valuable experience last year are among other returning midfielders who figure to be in the mix in 2019.  Amferny Arias Sinclair who participated in the spring season is among the newcomers who could make an immediate contribution in the midfield.

There is work to do on the defensive side of the ball but McIntyre has a solid necleus of returning players supplemented by several experienced newcomers to work with. Junior Sondre Norheim (5g, 0a) who has been a starter for the past two seasons returns to anchor the backline along with senior John-Austin Ricks (1g, 0a). Junior Dylan McDonald who had a productive spring season also figures to be in the mix in the back.  Transfers Matt Orr and Nyal Higgins who participated in the spring season and Abel Mickey Watson are among the members of the recuriting class who should be in the hunt for a starting role in the back. Redshirt junior Jake Leahy and sophomore transfer Christian Miesch who was the starter in goal last year for Stony Brook will compete for the starting job between the pipes that is vacant due to the graduation of Hendrik Hilpert who very capably owned that role for the past four seasons.

Syracuse opens the season with a difficult on the road contest against Georgetown followed by five consecutive contests at home that includes an Atlantic Coast Conference match against Louisville. The potential exists for a good start if the defense comes together quickly and playmakers emerge and embrace bigger roles on the offensive side of the ball.  Syracuse will not be an easy out for anyone in 2019. Still, improvement is needed on both sides of the ball in order for the Orange to secure a double digit win season and be a factor in the highly competitive Atlantic Coast Conference race.

Christia Miesch – Goalkeeper – Ried-Brig, Switzerland – Sophomore transfer from Stony Brook University where he was the starter in goal in 2018. 2018 All-America East Confernece Second Team selection and the America East Rookie of the Year. Played for FC Sion Academy in Switzerland.