St. John’s Focused On Additional Wins And A Big East Title In 2022. Balance Looks To Be The Key Ingredient. 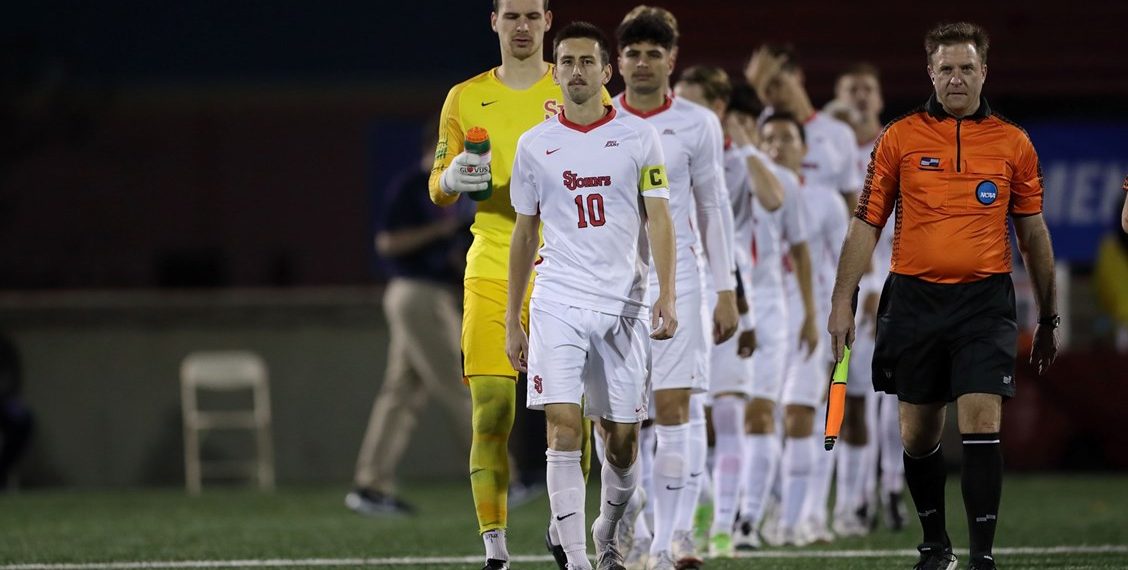 Lucas Bartlett – Defender – Sixth pick in the 2020 MLS SuperDraft. 2021 All-Big East Conference First Team selection. Scored five goals including three game-winners in 2021 season. Played one season at St. John’s after transferring in from Drake where he was an All-MVC First Team member.

Tani Oluwaseyi – Forward – All-Big East Freshman Team in 2018. As a sophomore in 2019 he was named the Big East Conference Offensive Player of the Year with 11 goals and five assists. During 2020 season had five goals and three assists in nine games. 2021 All-Big East First Team member. Played in only two contests during the 2021 season due to injury.

Rafael Bustamante – Defender – Three-year starter. Played in 75 games over five seasons with 50 starts. Had one career goal and one career assist.

Anthony Herbert – Forward – Played in 19 contests with 11 starts after transferring in from FDU where he was a two-time All-NEC Second Team member.

Andrew Bennett – Midfielder – Appeared in 16 contests in 2021 with 2 starts. Recorded two goals and one assist.

St. John’s played well enough on the defensive side of the ball to remain in contention in every contest they played in 2021. The Red Storm’s ability to come up with the big goal needed to close out the close games looks to be the biggest opportunity for improvement in 2022.

Dr. David Masur stated, “Our 2022 class has all the attributes we look for in our players, focus, skill and drive on the field and great work ethic off it.”

Any analysis of St. John’s heading into the 2022 season has to begin with Graduate Student Brandon Knapp who has done just about everything but run the concession stand during his tenure to date in Queens. Knapp (5g, 6a), the Red Storm’s top goal scorer last year and three-year team captain, has played up-top, in the midfield, and as a center back. Knapp, a 2021 All-Big East First Team member, is a prime timer who will be the cornerstone of a St. John’s team that has the potential to be very good in 2022.

The midfield looks to be deep with Knapp (5g, 6a), graduate students Einar Lye (3g, 4a) and Ethan Shaw, senior Atila Ashrafi (1g, 4a) and juniors Aidan Borra and Riyon Tori among those slated to return. Transfer Chris DePetro who started in 48 games during four seasons at Colgate is among the newcomers who looks to be in the mix in the midfield.

Seniors Wesley Leggett (3g, 1a) and Adrian Roseth (1g, 1a) are among returning forwards who the Red Storm will look to for offensive punch up top. Graduate Student Drew Rosen, redshirt junior Tommy Scalici and junior Nicholas Chateau are among other others who will vie for playing time up top. Sophomore forward Nigel Griffith who transfers in from Temple where he was a 2020 American Athletic Conference All-Rookie Team selection is among the newcomers who could make an immediate impact.

Defense has been St. John’s wheelhouse in the recent past with the 2019 season the lone exception. During 2019 the Red Storm scored a total of 38 goals led by Tani Oluwaseyi with 11. The Johnnies have been held to a total of 23 or fewer goals in every other season since 2016. Whether they can up their productivity a bit on the offensive side of the ball in 2022 while still remaining stout on the defensive side of the ball remains to be seen.

Midfielders Brandon Knapp (5g, 6a) and Einar Lye (3g, 3a) and forward Wesley Leggett (3g, 1a) are the only returning players who scored three or more goals in 2021. If St. John’s is able to up their big play ability on the offensive side of the ball the potential exists for the Red Storm to prevail in the close contests that eluded them last year.

The loss of an experienced and talented group of backs and an All-American goalkeeper is enough to cause concerns. St. John’s will likely mix and match several returning players with members of the recruiting class to fill the rather large void that exists in the backline due to the departure of the likes of All-Big East First team selection Lucas Bartlett (5g, 3a), Matt Chandler, Rafael Bustamante, Jared Juleau (1g, 3a) and Johan Aquilon. Chandler, Bustamante and Aquilon were all mufti-year starters.

Graduate Student Sannoussi Sangary , senior Ignacio Sanchez who is coming off an ACL injury and juniors Jack Russo and Jack Blumberg are among returning backs. Jordan Bailon who transfers in from Dartmouth where he was a starter and freshman Markus Pusztahegyi who honed his skills playing for Toronto FC are among the newcomers who will contend for a starting role in the back.

The biggest gap to fill and the greatest unknown pertains to the shoes that must be filled due to the departure of All-American goalkeeper Luka Gavran. Sophomores Ryan Foley and Emmanuel Smalios and newcomer Andrew Hammesley are among those who will compete for the starting job between the pipes. It looks to be a toss-up at this point as to who will emerge to earn the starting nod in goal.

Dr. David Masur enters his 31st year as the head coach at St. John’s with a 385-168-93 overall record. Masur and his staff will have a solid contingent of returning players to work with up-top and in the midfield. The unanswered question is who, other than Brandon Knapp, will emerge to energize the attack. Midfielder Einar Lye who has ten career goals and forward Wesley Leggett who has six career goals are among returning players who are the most likely candidates to add an additional dimension to the offense. Midfielder Atila Ashrafi (1g, 4a) and forward Adrian Roseth (1g, 1a) are among other returning players who the Red Storm will likely count on to help power the attack.

There is work to do on the defensive side of the ball due to the voids that exist due to departures. The trio of experienced transfer Jordan Bailon and freshman Markus Pusztahegyi are among the newcomers who will join several returning players to compete for a starting role in the backline. The biggest unanswered question on the defensive side of the ball and a crucial success factor in 2022 pertains to filling the vacancy that exists in goal due to the departure of Luka Gavran.

Last year the Red Storm finished behind Georgetown and Providence and slightly above Villanova, Creighton and Butler in Big East Conference play and earned an at-large berth in the NCAA Tournament. The Johnnies led the Big East Conference with a 0.60 goals against average while posting a conference best 12 shutouts. However, they were in the number seven spot in the eleven member conference with an average of 1.15 goals scored per game.

In order to be measurably better in 2022, St. John’s will have to settle into a balance between offensive productivity and defensive stability that will give them the edge that they need to compete in the highly competitive Big East Conference and in the NCAA Tournament where the margin for error is always small. The difference between a win and a loss last year for the Red Storm was very slight. Five of St. John’s six losses were to teams that qualified for the NCAA Tournament and four were against nationally ranked teams. Upping their productivity on the offensive side of the ball by taking advantage of the scoring opportunities that come their way against a competitive slate of opponents without a decline in effectiveness on the defensive side of the ball will not be easy.

Key ingredients heading into the 2022 season include the unanswered questions that exist due to departures, the return of a solid core of players, the big play ability of Brandon Knapp, the need for the newcomers to make an immediate contribution, and the always very competitive Big East Conference. Mix all those ingredients together with the expertise and team-first focus that Masur brings to the pitch and you have what should be another very interesting season at St. John’s.

It may take a little time for the returning players who must assume a greater role and the newcomers who need to contribute to settle into a rhythm that will maximize productivity but if and when they do the product should be a team that is very difficult to face.

Nigel Griffith – Forward – Stroudsburg, Pennsylvania – Stroudsburg High School – A sophomore transfer from Temple where he played in 15 games with 7 starts with three goals and one assist in 2021. Named to AAC 2020 All-Rookie Team.