Akron Enters The 2022 Season With A Lot of Pieces Back from the 2021 Team. Experience and Continuity Are Positives. 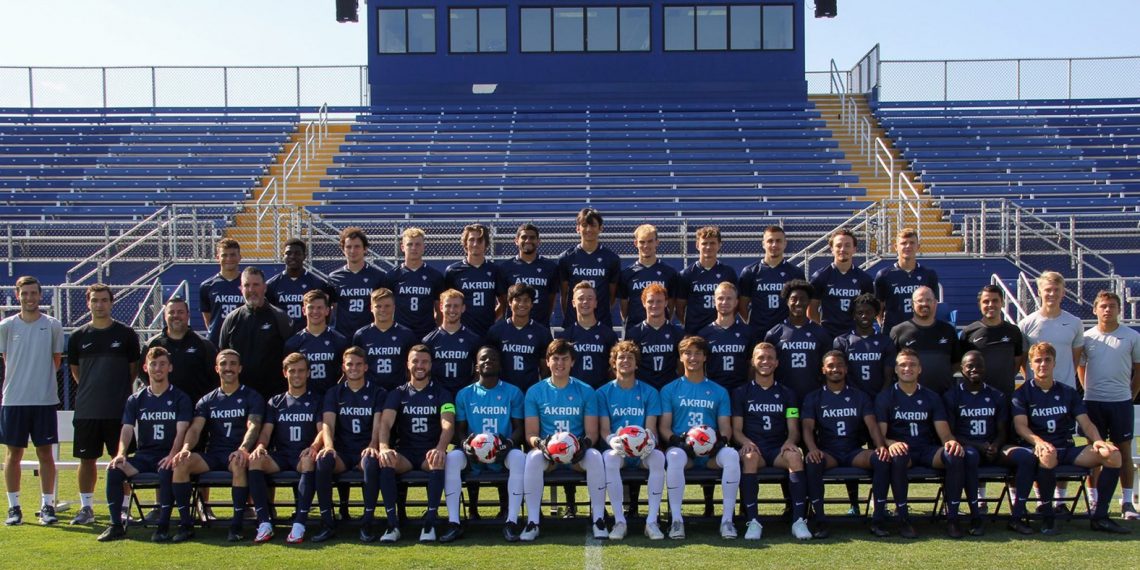 The Zips Have Added A Recruiting Class That Will Add Depth On Both Sides Of The Ball. Akron Performed Well Last Year Against Non-Conference Opponents But Uncharacteristically Struggled In MAC Play.

Will Meyer – Goalkeeper – Starter in goal in 2020 and 2021 seasons after transferring in from Louisville. 2021 United Soccer Coaches Third-Team All-North Region selection. Had 1.06 goals against average and six shutouts in 2021. Played in 27 games during tenure at Akron.

Akron will no doubt miss the playmaking ability that a healthy Diogo Pacheco (7g, 7a), a three-time All-MAC First Team honoree and 2021 All-American provided on the offensive side of the ball.

The good news is that four out of Akron’s top five goal scorers and players who were responsible for 23 of the 35 goals that the Zips placed into the back of the frame last year are slated to return. Junior forward Ryan Kingsford (6g, 4a) and sophomore forward Jason Shokalook (4g, 4a) are back to power the attack up-top. Kingsford, a 2021 All-MAC First Team selection, has the talent and experience needed to become the Zips go-to goal scorer in 2022. Shokalook, a highly regarded finisher who now has two seasons of experience under his belt looks to be ready to assume greater responsibility in 2022. True freshman Stefan Dobrijevic who honed his skills playing for the Internationals Academy is among the newcomers who could earn minutes up-top.

Sophomores defender Malik Henry (0g, 7a) and midfielder Dyson Clapier (4g, 3a) who were 2021 All-MAC Second Team members and junior midfielder Johnny Fitzgerald (3g, 6a) are among others who will feature prominently in the attack.

Add Akron to the list of what appears to be a larger than usual number of teams who must replace a multi-year starter in goal. Redshirt sophomore Cam Victor, sophomore Mitch Budler, and sophomore Josh Hangi are in the mix to replace Will Meyer who anchored Akron’s defense in 2020 and 2021. Meyer played every minute in goal in 2021. Victor looked good during spring contests but the starting job remains up for grabs with Budler and Hangi still very much in contention.

The departure of backs Daniel Strachan and Carlos Ritaccio, four-year starters and team captains, creates another unanswered question. The experience and leadership that they brought to the pitch are not easily replaced. However a contingent of returning backs supplemented by several newcomers look to be ready and eager to accept the challenge and assume a greater role.

Junior Will Jackson (2g, 3a), a MAC Second Team selection in 2019 and 2020 and three-year starter returns at left back, sophomore Malik Henry (0g, 7a), a 2021 All-MAC selection returns at right back. Both have the ability to push forward and add an additional dimension to the attack. Sophomore Jonas Buechte (0g, 2a) who started all 18 contests will slot in either as a defensive midfielder or center back. Junior Joel Sangwa who transfers in from Iowa Western Community College where he was a two-year starter is among the newcomers who looks to be a good fit at center back. Senior back William Portman who appeared in 18 contests with 8 starts last year is among others who should be in mix on the defensive side of the ball.

Akron was an enigma last year. Who would have thought that an Akron team that had wins over Pitt and Penn State, ties with Big Ten foes Indiana and Michigan and a 5-1 win over a good Bowling Green team would also finish MAC play with a 2-3-1 record and not qualify for one of the four spots in the conference tournament. For many years winning the MAC title was pretty much a given at Akron. The question was how well would the Zips perform against a very competitive slate of non-conference opponents. Those days may be over with a level of parity now in the MAC that didn’t exist in the past. In the current parity-driven MAC, the margin for error is small and teams that are not opportunistic and able to put teams away pay a price for it.

Forwards junior Ryan Kingsford (6g, 4a) and sophomore Jason Shokalook (4g, 4a) and sophomore midfielder Dyson Clapier (4g, 3a) are among those who Akron will likely depend on to apply pressure to opposing defenders in 2022. Kingsford is a proven and polished finisher while Shokalook and Clapier are well positioned to have a real breakout season in terms of their contribution to the attack. However, it remains to be seen if the lack of a go-to goal scorer could be an issue in 2022.

The effectiveness of the midfield will likely hinge on the bump in play that the sophomores get from having a year of experience under their belts and whether or not the newcomers will be able to add depth and balance.

Senior defenders Will Jackson, sophomores Malik Henry, Jonas Buechte and senior William Portman return to provide a solid nucleus to build upon in the backline. Akron will have a new face in goal. The play between the pipes of Cam Victor, Mitch Budler or Jose Hangi and the ability of junior transfer Joel Sangwa among other newcomers to fill the void that exists at center back looks to be the X-Factor on the defensive side of the ball at Akron heading into what should be an interesting and exciting 2022 season for the Zips.

It is hard to not view Akron as a frontrunner in the MAC and a contender on the national scene. The 2022 team has the potential to be special. MAC regular season and tournament titles and a top national ranking are not out of the question for Akron in 2022. However, only if they can resolve the “Achilles Heel” that kept them from putting away opponents last year. There were contests late in the year in 2021 that Akron controlled but were unable to come up with the big play they needed and they paid a price for it. Whether the root cause was mindset related, stamina related, or a weakness in terms of talent, or something else, the Zips must resolve it if they hope to increase their win total in 2022.

There are challenges to overcome. Still, Jared Embick’s past record of success says he sorts it out and Akron gets the job done in 2022.

Josh Hallenberger – Midfielder – San Antonio, Texas – University of Texas High School – A junior transfer from Clemson where he played in 14 contests during the 2021 season with 2021 with 4 starts. He scored 2 goals and had 3 assists in 2021. He saw action in 7 games during the 2020 season. Played for the Houston Dynamo.

Jak Higginbothan – Defender – Derby, England – Brine Leas – Played with Crew Alexandra, Sunderland, and Philadelphia Union U-23’s. A tenacious defender who will compete for minutes as a defensive midfielder or center back.

Joel Sangwa – Defender – Phoenix, Arizona – Modderham – Junior transfer from Iowa Western Community College where he was a starter for two seasons. A center back at Iowa Western.

Levi Stephens – Defender – Akron, Ohio – Firestone – Played with the Columbus Crew Academy, the Philadelphia Union, and the Internationals Academy. Will be in the hunt for minutes in the back.