Belmont Has Momentum. Bruins Seek To Build On A Program Best 13 Win 2021 Season. 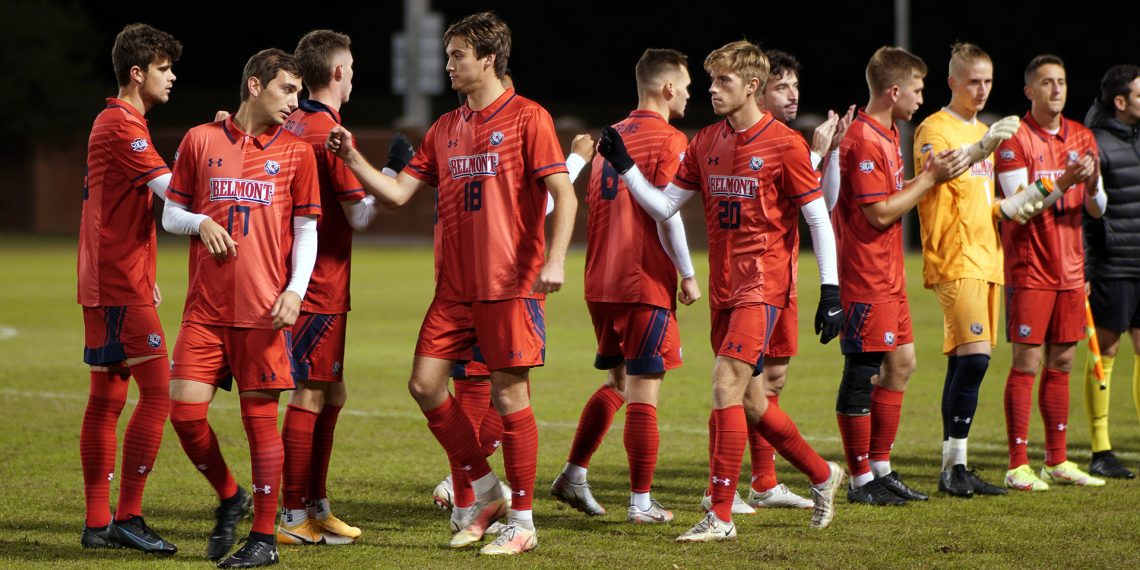 Belmont Begins Play In The Missouri Valley Conference In 2022.

Drew Romig – Goalkeeper – Romig was the starter in goal for two seasons after transferring in from North Carolina. He was a 2020 All-Southern Conference Second Team selectin and a 2021 All-South Region First Team selection. His 0.95 goals against average in 28 matches was a program record as was the eight shutouts he recorded during the 2021 season.

Niccolo Dagnoni – Center Midfielder – A three-time All-Southern Conference selection including two First Team selections. A four-year starter. Dagnoni completed a banner four-year tenure at Belmont among the program leaders in both goals and points. He set the program’s all-time career assist record with 26. His eleven assists in 2021 were the most ever in a single season.

Jack Shaw – Defender – An All-Southern Conference selection in 2020 and 2021. A three-year starter after transferring in from Wisconsin. Had five career goals and eleven career assists at Belmont.

Ares Marlonsson – Forward – A multi-year starter and steady contributor during his tenure at Belmont. Played in 60 career contests over five seasons.

Last year Belmont was 9-0-0 at home and 3-5-1 on the road. Improvement is needed in effectiveness and the level of intensity when playing away from home.

Regarding the four newcomers initially added, David Costa stated, “Each individual in this group displays the character, discipline, and ability to help Belmont pursue championships as we join the Missouri Valley Conference. We look forward to having them on campus while continuing to add to this class in the coming months.”

The departure of center midfielder Niccolo Dagnoni (5g, 11a) leaves a big gap. Dagnoni was a catalyst on the offensive side of the ball and was the kind of playmaker who enhanced the level of play of those around him.

The good news is that forwards senior Liam O’Brien (11g, 1a) and sophomore AJ Chastonay (7g, 0a) who were All-Southern Conference Second Team selections in 2022 are slated to return. O’Brien was a mainstay in Belmont’s offense with a highly productive 2021 season during which he took his game to the next level with a team leading 11 goals. Chastonay had big play ability as reflected in the fact that all seven of his goals in 2021 were game-winners. The duo of O’Brien and Chastonay are proven finishers who give the Bruins an attack that will be difficult for opponents to keep under wraps. Sophomores Esteban Leiva (2g, 1a) who appeared in 12 contests last year and Austin Yowell who played in 9 matches are among other returning forwards who will seek to increase their minutes in 2022.

Sophomore Mikey Saunders (2g, 1a) and senior Jansen Wilson look to be among the midfielders who will provide additional punch to the attack and help fill the void in playmaking that Dagnoni’s departure creates. Saunders now has two seasons of starting experience under his belt at Belmont while Wilson who transfers in from University of Kentucky is a seasoned veteran who appeared in a total of forty-one contests during the 2019, 2020 and 2021 campaigns for a very competitive Wildcat team. Senior Kyle Barks (0g, 1a), graduate student JP Armbruster (0g, 1a) and junior Davis Eddleman (0g, 1a) are among other returning midfielders who will play key roles in 2022. Barks and Armbruster both have three-years of starting experience while Eddleman was a starter last year after transferring in from Xavier.

Solid team defense played a key role in the success that Belmont had last year. Belmont recorded a program single season record nine shutouts in 2021 while holding opponents to an average of 0.95 goals per game. Nonetheless their play on the defensive side of the ball was inconsistent and porous at times particularly on the road as reflected in a 3-1 loss to Missouri State in Springfield and 3-2 and 4-3 losses to conference foe Mercer in Macon. Belmont’s best defensive effort of the season was in a gutsy 2-1 win over an attack oriented high powered UNC Greensboro team on the road.

The potential exists for defense to be a team strength in 2022 if, and that is a big if, Belmont can find a replacement in goal who will maintain the level of play that departed goalkeeper Drew Romig bought to the pitch. Replicating the game saving stops that Romig often made during his two year tenure in Nashville will not be easy. Graduate Student Nate Logan who saw action in one game last year after transferring in from Xavier and sophomore Aaron Stafford who transferred in from Fordham are among returning netminders who will compete for the highly important starting role between the pipes.

A solid and experienced nucleus returns in the back led by senior John Bannec (0g, 1a) who has been a starter for two seasons and sophomore Case Cox (3g, 5a) who hit the ground running last year after transferring in from the University of Kentucky. Bannec and Cox were 2021 All-Southern Conference Second Team members. Sophomore Eric Stiles who was a starter last year should again be a key defender in 2022. Sophomore Colton Milosch and freshman Dylan Steely who did not see action last year are among returning defenders.

David Costa will enter his fourth season as the head coach of Belmont in 2022. During his tenure to date the trend line at Belmont has been upward with five wins in 2019, seven wins in 2020, and 13 wins in 2021. And now for an encore in 2022. The potential exists for continued improvement with eight starters, four All-Southern Conference Second Team selections, and three of the top goal scorers slated to return.

There is a lot of excitement at Belmont and the sense that the future holds good things for the Bruins. The next step looks to be a conference title and berth in the NCAA Tournament but that will require improvement on both sides of the ball and greater consistency when playing on the road. In addition, the Bruins will be traveling in uncharted waters in 2022 as they make the transition from the familiarity of Southern Conference to the Missouri Valley Conference and the challenge of facing a new slate of conference opponents.

Continued growth on the offensive side of the ball will likely hinge on the productivity of Liam O’Brien and AJ Chastonay up-top and the ability of several of the midfielders to provide the playmaking ability and explosiveness that was provided by center midfielder and career assist leader Niccolo Dagnoni.

The backline looks to be solid and stable with the return of John Bannec, Case Cox and Eric Stiles but the lapses that existed at times last year have to be reduced in 2022 if the Bruins hope to increase their win total, The biggest question mark on the defensive side of the ball pertains to filling the void that exists due to the departure of goalkeeper Drew Romig who was a difference maker and will not be easily replaced.

The bottom line is that good things are happening at Belmont which is located in Nashville. The Bruins belong on the short list of programs that have momentum and a renewed sense of direction. Belmont may not win the MAC title in 2022, but chances are pretty good that they will make their presence known.