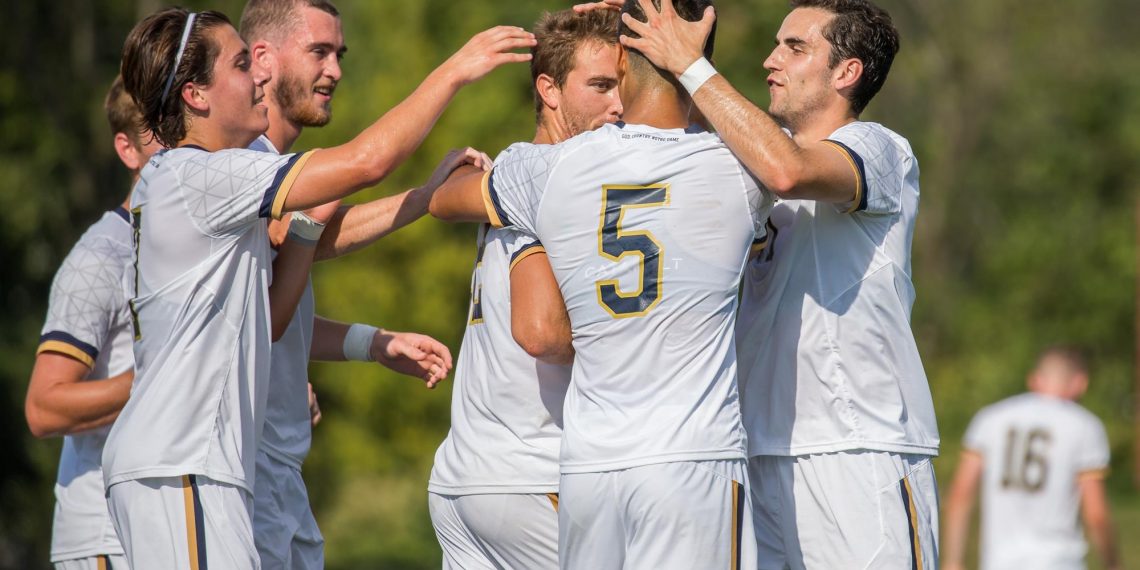 Chad Riley seeks to build on the success the Irish enjoyed in his first season at the helm of the program last year with the addition of a balanced six member recruiting class with resumes that include very competive play. The six freshmen will experience a learning curve as they make the transition to college soccer but nonetheless should help fill the need for both immediate assistance and long-term development.

Departures and Gaps – The Notre Dame roster included eight seniors in 2018. All saw significant playing time and will be missed. As in the past, a few of them qualify for and will be back for a fifth season.  Departures include forward Thomas Ueland (6g, 1a) and back Patrick Berneski (6g, 0a) who were the top two goal scores last year. Thirteen of Notre Dame's thirty goals last year came out of set pieces. Berneski was a key contributor in that regard. The departure of Tommy McCabe (0g, 2a), Blake Townes (1g, 2a) and Sean MacLeod (4g, 3a) creates a void in the midfield. The graduation of senior captain Berneski and Sean Dedrick (0g,2a) necessitates some reloading on the defensive side of the ball.

Opportunities for Improvement – Notre Dame displayed a lot of grit throughout the 2018 season but their level of intensity varried at times between halves which resulted in missed opportunitites to put away opponents. The 5-2 loss to Virginia Tech at home in which the Irish allowed the Hokies to score five times in the second half after leading 2-0 at intermission seemed to serve as a wake up call of sorts for the Irish who only allowed a total of two goals in their next seven contests.  Only two of the twenty goals Notre Dame allowed in 2018 were scored in the first half of play.

Coach's Recruiting Class Comment – Chad Riley stated, "We are excited to welcome this group of young men into the University and our team. Coach Plotkin and Coach Fahey did a wonderful job indentifying this group. This new class will certainly increase the competition within our team and I know many of them will compete for improtant minutes right away."

Summary – Riley returned to South Bend in 2018 as the Irish head coach following in the footsteps of legendary head coach Bobby Clark under whose guidance the program turned sharply upward. Riley was optimistic that his experience and the lessons learned as a player and assistant coach under Clark at Notre Dame and five very successful season as the head coach at Dartmouth would translate into a productive first season at Notre Dame. It did. Riley and his staff addressed the gaps that existed due to graduation and implemented a system of play that effectively maximized and merged together the individual talents of his players. The Irish were 11-7-3 overall in 2018, earned the number seven seed in the NCAA Tournament, and advanced to the Elite Eight for the fourth time in the history of the program and the first time since 2013 when the Irish won the national championship under Clark.

Continued success in 2019 will hinge on Notre Dame's ability to continue to play lock down defense like they did down the home stretch last year while also putting pressure on opposing defenses and continuing to be productive out of high opporutnity set pieces. The seniors will set the pace in 2019 as they usually do at South Bend but several of the underclassmen will need to have breakout seasons. Forwards Ian Aschieris (5g, 1a) and sophomore Jack Lynn (3g, 3a) look to be among the keys to the offense.  Senior backs Felicien Dumas (1g, 6a) and Senan Farrelly, senior goalkeeper Duncan Turnbull, and sophomore defensive midfielder Mohamed Omar look to be among those who will play important roles on the defensive side of the ball.