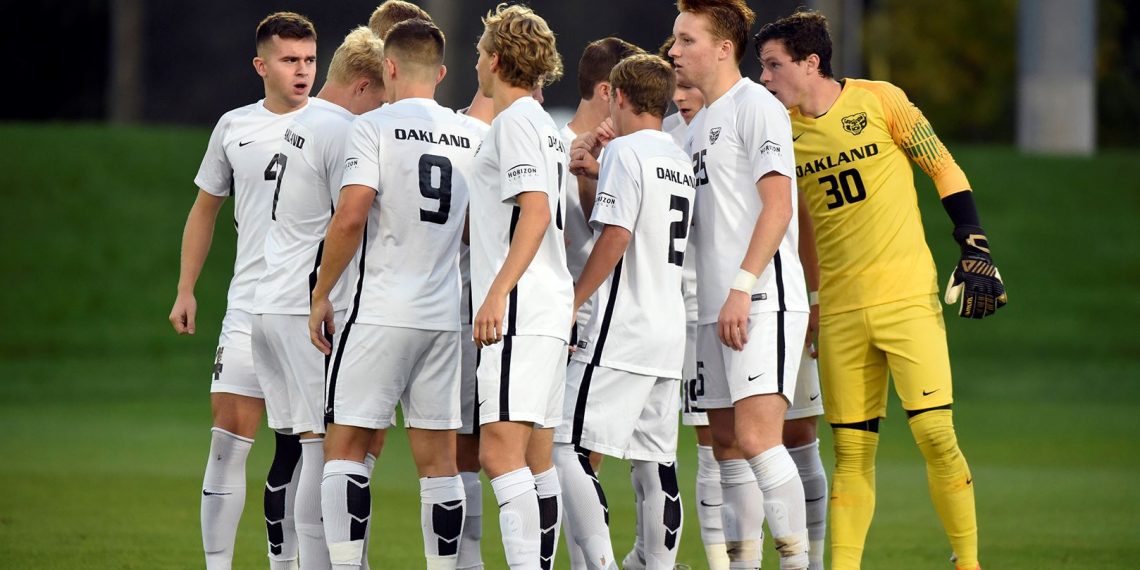 Oakland under head coach Eric Pogue has added a super sized 2020 recruiting class that includes several players who should make an immediate impact and others that will evolve into a role of greater responsibility as they gain experience. The newcomers join a solid contingent of returning players from the 2019 squad that was 7-9-3 overall with a 4-2-2 mark and second place finish in Horizon League play.

Opportunities for Improvement – The ability to finish scoring opportunities in the final third. The ability to consistently put together two solid halves of play. The Golden Grizzlies dug themselves into a hole several times last year by allowing early goals.

Summary – There is a lot to like about Oakland heading into the 2020 season. There are also specific areas where improvement is needed in order for the Golden Grizzlies to increase their win total and contend for the Horizon League championship and a berth in the NCAA Tournament. The first order of business heading into the 2020 season is rebuilding and strengthening the backline. The second area pertains to improvement in the quality of their play in the final third. Oakland's inability to finish the scoring opportunities that came their way kept them from winning several contests last year in which they played well enough to win.

Redshirt senior Sullivan Lauderdale, the 2019 Horizon League Goalkeeper of the Year with two years of starting experience under his belt, returns to anchor a Golden Grizzlie defense that allowed a total of twenty-nine goals last year. Sophomores Reid Sproat and Mitch Meldrum (1g, 0a) are among returning defenders who will seek to play a greater role in 2020. Sproat appeared in eight contests last year with four starts and Meldrum appeared in seven contests with one start. Julien Beausire, Naji Elder, Jaiden Ramsay-Kelly, Sebastian Nuzzo and Nicholas Rolink are among the newcomers who will contend for a starting role in the back.

The experience and savvy that Spencer Nolff and Evan Sawula brought to the pitch will be missed but Eric Pogue will have a solid and deep contingent of midfielders to work with. Senior Noah Jensen (4g, 5a), a 2019 All-Horizon League Second Team selection, three-year starter, and team captain, returns to set the pace in the center of the park. Jensen is a playmaker and hard working box-to-box midfielder. Senior Dylan Borczak, (4g, 8a), a 2019 All-Horizon League First Team member with two-years of starting experience under his belt, will add punch to the attack on the wing. Sophomore Adam McAleenan, a 2019 All- Horizon League Freshman Team selection with the benefit of a year of starting experience adds stability in the very important defensive midfielder role. Redshirt sophomore Cameron Wilde (3g, 3a), a 2019 All-Horizon League Freshman Team member, redshirt junior Napoleon Outlaw and redshirt sophomore Michael Teller are among other returning midfielders who should figure prominently in the mix in 2020. Sophomore transfer Ville Ahola, a member of the NEC All-Rookie Team last year at Fairleigh Dickinson, is a playmaker who should hit the ground running. Owen Smith, Arthur Widiez, Remco Gielen, and Logan Penton are among other members of the recruiting class who will challenge for playing time and add depth in the midfield.

Improvement up-top looks to rest in part on the shoulders of senior striker Charlie Braithwaite (6g, 1a) who led the attack last year after transferring in from Georgia Military College where he scored a total of thirty-five goals in two seasons. Junior Dawson Schrum who appeared in fifteen contests last year with one start and sophomore Mikey Ketteman (2g, 1a) who saw action in twelve games with two starts look to be among other returning forwards with the potential to add an additional dimension to the offense.

Oakland looks to be a team that will be eager to get back on the field in 2020 after ending the 2019 campaign with a scoreless tie with Milwaukee and a 3-1 loss to Northern Kentucky in their last two regular season contests followed by a disappointing and unexpected 4-1 loss to Wright State in the semifinals of the Horizon League Tournament.

It may take a little while to sort out the best combinations but the bottom line is that the Golden Grizzlies have the potential in 2020 to top last years win total.  How Braithwaite, Jensen, and Borczak perform on the offensive side of the ball and the performance of Lauderdale between the pipes will likely determine Oakland's success in 2020, up to a point. Taking the next step and winning the Horizon League title and a berth in the NCAA Tournament will require a total team effort with improvement in the qualify of play in the attacking third and the avoidance of lapses in play on the defensive side of the ball. If everything falls into place the Golden Grizzlies appear to have the ingredients and the depth needed to write a different ending in 2020.