North Carolina – Nine Starters Are Back From The 2020-2021 Team That Advanced To The College Cup. 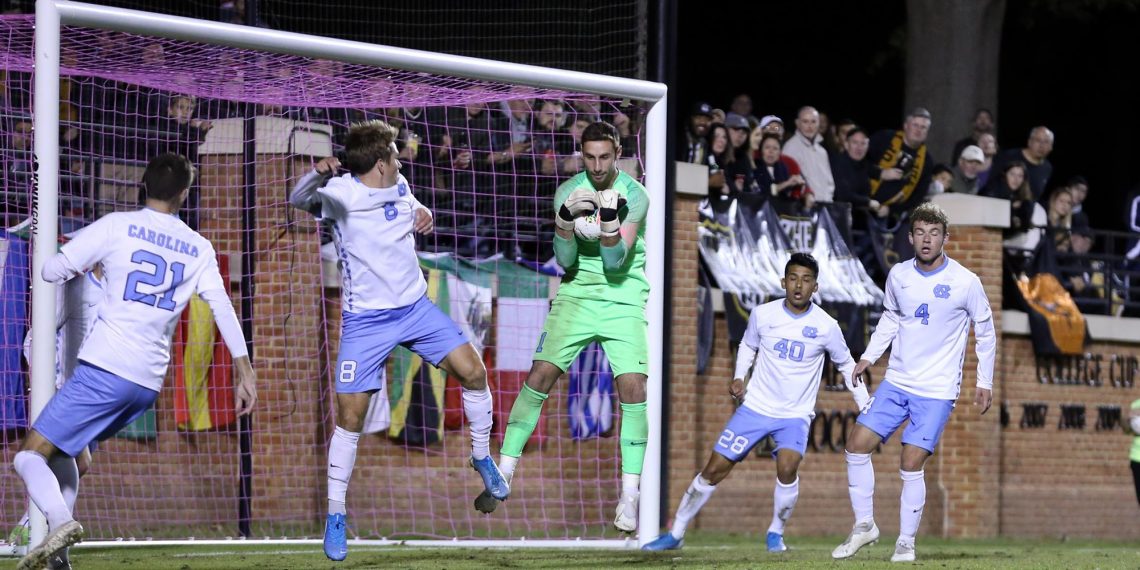 A good mix of talent returns on both sides of the ball supplemented by another highly regarded recruiting class.

The Tar Heels will be without All-American forward Giovanni Montesdeoca and defender Mark Salas who was a four-year starter. Defender Matt Constant who was a two-year starter entered the professional ranks at the conclusion of the fall 2020 season.

Offensive productivity. The ability to create and finish scoring opportunities. The Tar Heels had the best goals against average (0.57) in the ACC in 2020 but they were 10th out of the 12 teams in the ACC in average goals scored per game (1.11).

The departure of Giovanni Montesdeoca (5g, 2a) leaves a void that must be filled. The good news is that 14 Tar Heels scored last year. The not so good news is that 12 of the 14 scored only one goal. Forward Santiago Herrera (4g, 0a) is the only returning player who found the back of the net more than one time last year. Sophomore Akeim Clarke (1g, 2a) and junior Jonathan Jimenez (1g, 1a) are among returning forwards who saw plenty of action last year who will likely be counted upon for offensive firepower. Senior forward Alex Rose (1g, 0a) who led the Tar Heels in goals scored in 2019, junior forward Key White (1g, 1a) and midfielders Milo Garvanian (0g, 4a) and Lucas del Rosario (1g, 1a) are among other returning players who could add additional punch to the attack. Several of the newcomers have the potential to add to the attack.

Any discussion of the Tar Heel defense has to begin with multi-year starting netminder Graduate Student Alec Smir who was an All-ACC Second Team selection in 2020/2021. Smir anchored a North Carolina defense that recorded a total of nine shutouts and allowed a total of only 11 goals against a very competitive slate of opponents. Graduate Student Joe Pickering (1, 0a) and redshirt sophomore Riley Thomas (1g, 0a) return to anchor the backline. Sophomore Aldair Sanchez who appeared in 14 contests last year should also play a prominent role in the back in 2021.

With positive progress especially on offense, a bevy of returning talent on both sides of the ball, and another highly regarded recruiting class headed to Chapel Hill, the Tar Heels have the pieces to again be among the frontrunners in the ACC and on the national scene. UNC also received a boost when several key starters whose eligibility would have ended elected to take advantage of the NCAA coronavirus response that offered players another year of eligibility.

Carolos Somonao, who ranks second in the nation in winning percentage among active Division I head coaches, annually does a good job of making the adjustments needed to fit and maximize the talents of his players. Chances are pretty good that the Tar Heels will be in the thick of things again in 2021 but they will not have much of a margin for error particularly when facing opponents with a similar style of play.

Much will depend on the effectiveness of the guys up top to crank up the dial on the offense. The Tar Heels may not have one dominant go-to goal scorer. Instead it may again be offense by committee. The midfield looks to be deep and experienced with the return of seniors Milo Garvanian and Lucas del Rosario, graduate student Fillipo Zattarin and sophomore Tim Schels who had an impressive rookie season. The defense has some reloading to do due to the departure of back Mark Silas but with defenders Joe Pickering and Riley Thomas and goalkeeper Alec Smir, who is among the nation’s premier goalkeepers, slated to return a significant drop off is unlikely.

The Tar Heels have a chance to settle into a rhythm and jell as a team with season opening games at home against non-conference foes Bucknell, Virginia Commonwealth and Georgia Southern followed by a game on the road against Davidson before getting into ACC play with a tough matchup on the road against Pittsburgh on September 10.