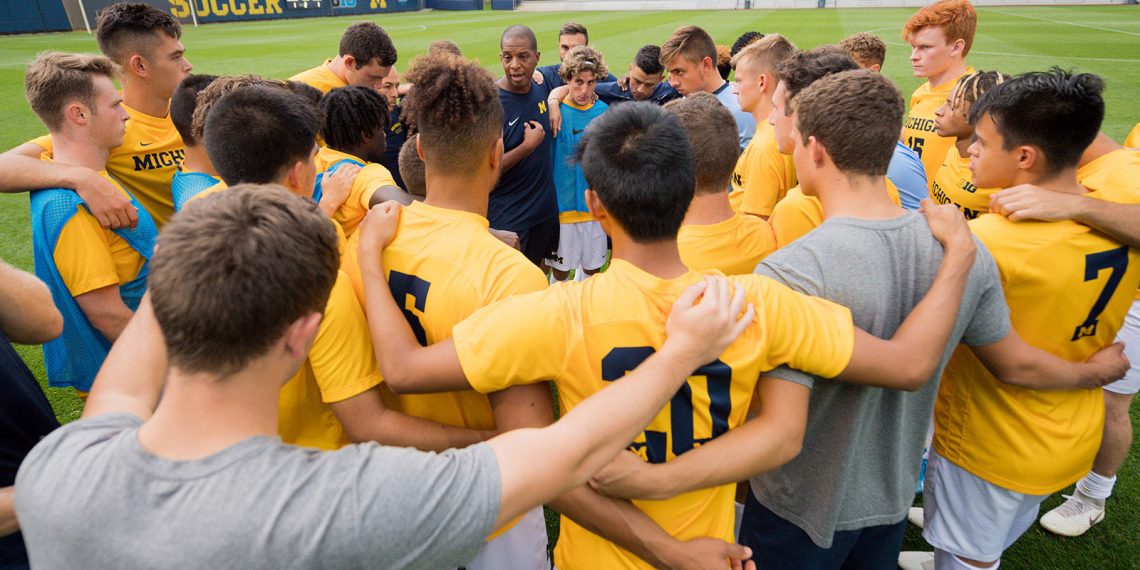 Michigan is coming off three consectuitve double-digit win seasons and three straight at-large berths in the NCAA Tournament that included a trip to the Sweet Sixteen last year. The Wolverines have a few key gaps to fill but look to be on solid ground in 2020 with a talented foundation of experienced upperclassman slated to return on both sides of the ball.

Departures and Gaps – Departures due to graduation include forward Jack Hallahan (5g, 6a) who was a three-time All-Big Ten Team First Team selection and four-year starter with twenty-six career goals and twenty-one career assists, forward Nebojsa Popovic (10g, 4a) who was the 2019 All-Big Ten Offensive Player for the Year after transferring in from Oakland University for a single season; goalkeeper Andrew Verdi who was the 2019 All-Big Ten Goalkeeper of the Year with a 0.78 goals against average and seven shutouts, and defender Abdou Samake (0g, 2a) who was a three-year starter after missing his freshman season due to injury.

Opportunities for Improvement – The loss of forwards Jack Hallahan and Nebojsa Popovic creates a significant void in the offense that must be filled. A key to the program's success in 2020 continues to include a mindset of continual improvement and lots of hard work.

Coach's Recruiting Class Comment – Chaka Daley stated, "We are delighted to add these nine newcomers to our program in 2020. These student-athletes are not only talented soccer players that will complement our returning group. but they are outstanding young men who will become amazing ambassadors for our program."

Summary – The Wolverines were 11-5-6 overall last year with a 4-1-3 mark in Big Ten regular season play that was good for a third place finish behind Indiana and Penn State. Michigan looked like a team that could be headed for a slide last year after back-to-back losses to Indiana on the road and Western Michigan at home and a tough match coming up against Notre Dame in South Bend. What occurred at that critical tipping point was noteworthy and reflected a lot of grit. The Wolverines rebounded and finished the season with a flurry that included an eight game unbeaten streak with wins over Notre Dame, Michigan State, Maryland and Penn State and a run to the Big Ten Tournament final for the second consecutive year.  Michigan was subsequently awarded the number thirteen seed in the NCAA Tournament and advanced to the Sweet Sixteen where their season ended with a 3-1 loss on the road to number four seed Wake Forest.

Michigan will enter the 2020 season with enough talent and experience to make a fourth consecutive double digit win season and berth in the NCAA Tournament realistic expectations. In fact, anything less will be a disappointment for a senior laden team that should again have a multi-dimensional attack and a stout defense despite several key departures due to graduation.

Seniors Umar Farouk Osman (1g, 3a) and Mohammed Zakyi (3g, 0a) and junior Derick Broche (7g, 3a) who had a breakout season last year after missing the 2018 campaign due to injury and sophomore speedster Christian Pulselli (1g, 3a) who had an impressive freshman season are explosive playmakers who are among the likely candidates to power the power the attack up top and fill the void that exists due to the graduation of Nebojsa Popovic and Jack Hallahan. Junior Sosa Emovan is among other returning forwards who will seek to play a greater role in 2020. The members of the 2020 squad may not be able to replicate what Hallahan accomplished during his four year tenure and what Popovic accomplished during his one year at Michigan but they will bring a lot of firepower to the pitch. The potential exists for a very productive offense.

Senior holding midfielder Marc Ybarra, a 2019 All-Big Ten Second Team selection  who led the conference in assists last year, returns to set the pace in the middle of the park. Ybarra is a three-year starter and team captain who takes good care of the ball, distributes well, and is a strong defender. Senior Carlos Tellez (1g, 2a), junior Kevin Buca (0g, 1a) and sophomore Harry Pithers (0g, 2a) are among other very capable returning linkmen who should play key roles. Junior Aidan Nam and sophomore Inaki Rodriguez (0g, 1a) are among other returning linkmen who will seek to pay a greater role in 2020. Junior Cameron Martin, a transfer from the University of San Francisco, and freshman Bryce Blevins are among several very promising newcomers who should challenge for playing time and add depth to the Wolverine midfield.

Last year Michigan had a program best 0.79 goals against average with seven of the eighteen goals they allowed coming in a 4-3 season opening loss to Florida Gulf Coast University and a 3-1 loss to Wake Forest in the NCAA Tournament. The backline should be stout in 2020 due to the return of a solid group of defenders led by veteran senior center back Jackson Ragan (2g, 4a), a 2019 All-Big Ten First Team member, who has three years of starting experience under his belt. Seniors Joel Harrison (1g, 0a) and Austin Swiech (0g, 1a) who have been starters for the past two years provide additional stability and experience to the backline. Sophomore Carter Payne who played in ten contests with eight starts last year, junior Declan Gaffney and new recruit Jens Hoff round out what should be a very organized and unified backline. Sophomore Owen Finnerty returns in goal after playing in eight contests last year with seven starts. Finnerty gained valuable experience and performed well under pressure last year when he became the starting netminder after Andrew Verdi was injured in the later part of October.

The Wolverines have a winning identify and a lot of momentum under Chaka Daley. Michigan looks to be a deep,quick and experienced team in 2020. Regardless, the Big Ten schedule will once again leave little wiggle room and it is highly likely that the road to the conference title as in the past will again travel through Bloomington. Michigan has emerged as a top tier contender in the Big Ten but their ability to take the next step and secure the conference title and make a deeper run in the NCAA Tournament still remains a stretch goal but it's clearly less of a stretch in 2020 than it has been in the past.

Jens Hoff – Defender – Drammen, Norway – Norwegian School of Elite Sports – Played with Asker FK and Stromsgodset TF U-19 in Norway. An athletic and physical center back.