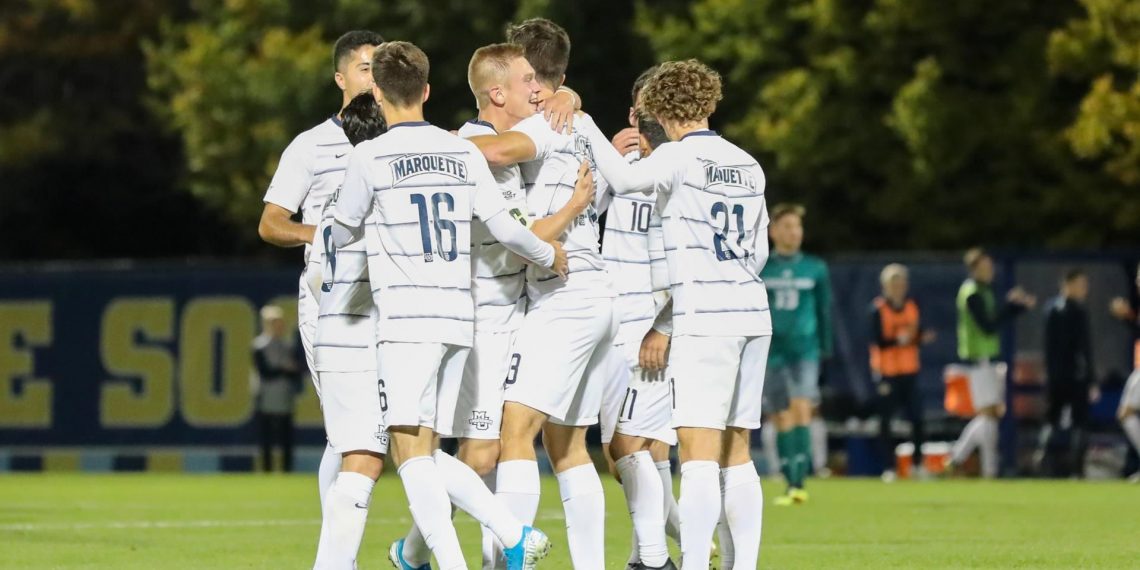 Marquette looks to replace a six-man contingent of seniors with seven freshmen and five transfers as they look to qualify for the Big East Tournament for a third consecutive season.

Opportunities for Improvement – For a side that enjoys playing an offensive style of soccer, the Golden Eagles coud do with some refinement in their end-product in the final third. Their incoming class is full of prospective forwards that can help improve unpon the twenty-five goals they scored last year and defenders capable of coping with the demands of Louis Bennett’s high-octane system.

Coach’s Recruiting Class Comment – Louis Bennet said, “We’re losing several guys from a very successful senior class. Our staff worked hard to find a bevy of talented players who we can develop to step in and fill some holes in our roster. We’re excited about the talent and versatility of this group.”

Summary – It is a little difficult to get a handle on Marquette heading into the 2020 season. Louis Bennett will have a necleus of players from the 2019 team to work with but he also has some rebuilding to do due to the departure of a senior class that included All-Big East First Team defender Patrick Seagrist, All-Big East Second Team selection midfielder Luka Prpa, and All-Big East Third Team forwards Josh Coan and Connor Alba. On the other hand they have added a promising twelve member recruiting class that has the potential to make an immediate impact on both sides of the ball for a team that scored twenty-five goals last year and allowed thirty-one. That means there will likely be a lot of competition for playing time as well as some growing pains as the newcomers merge with returning players to fill the gaps that exist.

The Golden Eagles were 8-9-1 overall last year with a 4-5-0 mark in Big East Conference play that was good for the number six spot in the Big East Conference Tournament. The eight wins was a tiny step forward since it represented Marquette’s highest win total since the Golden Eagles recorded eight wins in 2014. But it was a roller coaster season of sorts during which Marquette fell into a pattern of two wins followed by two losses with numerous changes throughout the year in the composition of the starting lineup. A total of twenty-one players earned a start with senior forward Conner Alba and senior defender Patrick Seagrist the only players who started every contest.

Junior Lukas Sunesson (3g, 1a), redshirt sophomore Christian Marquez (3g, 1a) redshirt junior Sam Thornton who missed all but the first three games of the 2019 season due to injury, and redshirt sophomore A.J. Franklin (0g, 1a) are among returning forwards who are likely candidates to power the attack in 2020. Junior transfer Cristian Gennaro from Ottawa University and freshman Beto Soto are among several members of the reruiting class who could add an additional dimension to the attack up-top.

Redshirt sophomore Alex Mirsberger (1g, 2a), junior Alan Salmeron and redshirt juniors Christian Albelo and Zak Wegner are among returning midfielders who figure to play key roles in 2020.  Junior transfers Matheus Pereira from Marshalltown Community College and Zyan Andrade from the University of San Francisco and freshman Thomas Priest are among a solid contingent of newcomers who could challenge for minutes in the midfield.

Redshirt junior Manuel Cukaj (3g, 1a) returns to anchor the backline. Redshirt senior Oliver Posarelli who was a starter in 2018, redshirt sophomore Gabe Kash who played in fourteen games with five starts, and sophomore Clay Smith who saw action in ten games with one start are among other returning players who will seek to play a greater role in the back in 2020. Sophomore back Harvey Read who transfers in from Rhode Island looks to be among the members of the recruiting class who will challenge for a starting job. Junior Cedrik Stern who started the final nine games of the 2019 season and reshirt sophomore Jackson Weyman who started the first nine games return in goal. Redshirt sophomore transfer Chandler Hallwood from Gannon University adds a third contender for minutes between between the pipes.

Marquette played well at times last year but their inability to consistently put together a full ninety minutes of play hampered their win loss record and resulted in a very small margin for error. The potential exists for improvement in 2020 but in order for Marquette to come out on the winning side of the equation more often in 2020 they need to be more consistent, avoid lapses in play, and playmakers must emerge on both sides of the ball.   .

Kacper Chrapczynski – Forward – Streamwood, Illinios – Lyons Township High School – Played for Sockers FC of Chicago where he was the fifth-highest goal scorer in the country, with twenty goals in twenty-three games. Scored seven goals in eleven matches in 2019-20.

Alan Kim – Forward – Cedar Rapids, Iowa – Kennedy High School – Four-year letterman at Kennedy High School and served as co-captain during his junior and senior years. All-State honoree as a junior in 2019. Named All-Conference and All-Metro as a sophomore and junior. and claimed All-Academic All-State accolades.

Thomas Priest – Midfielder – Neenah, Wisconsin – Neenah High School – Four-year letterman at Neenah High School and served as team captain his senior year. Led team to two conference titles and a runner-up finish at the state tournament in 2019. Named Fox Valley Conference Player of the Year in 2019 and co-MVP in 2018. Earned All-State, All-Region, and All-Conference accolades as a senior. Played for FC Wisconsin.

Chandler Hallwood – Goalkeeper – Halifax, England – Sophomore transfer from Gannon University (Pennsylvania) where he logged 1,863 minutes in goal and finished with an 18-3-0 record. Recorded the most single season wins in program history. Named the 2019 PSAC West Devensive Athlete of the Year. Named to the United Soccer Coaches All-America Second Team.

Matheus Pereira – Midfielder – Brasilia, Brazil – Junior transfer from Marshalltown Community College. Played two seasons at Marshalltown where he helped the team finish fifth at the NJCAA National Championship in 2018 with an 18-2-1 record. Named to the 2018 NSCAA All-Region Second Team. In 2019, Marshalltown was the NJCAA North Central District runners-up. Pereira was named to the NSCAA All-Region Second Team and was named the Region XI Tournament MVP. Pereira scored ten goals and contributed fourteen assists during his career at Marshalltown.