Georgetown Reloads In 2022. Hoyas Have More Than The Usual Number Of Key Departures. 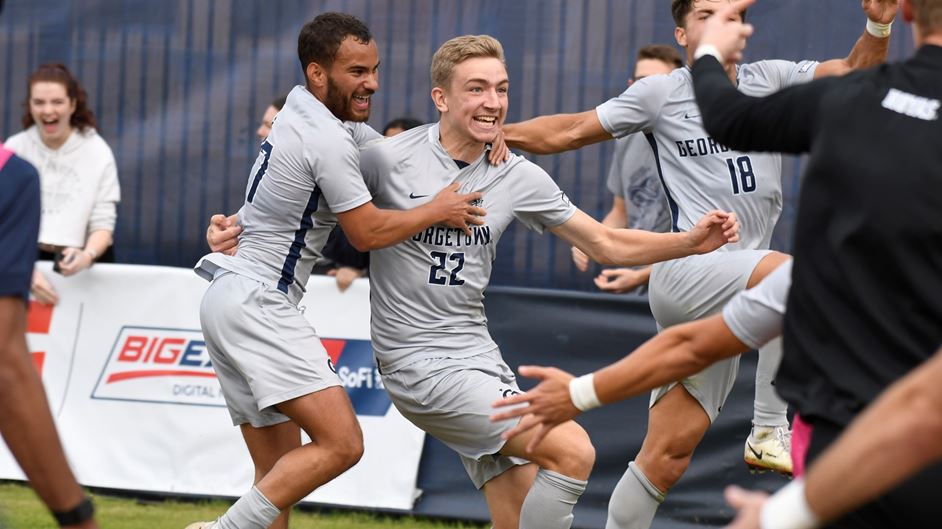 Georgetown Is Coming Off A Banner 2021 Season In Which They Were 18-3-1 Overall, Won Both The Big East Regular Season And Tournament Titles And Advanced To The College Cup.

Hoyas will be without ten players from the 2021 team including the MAC Hermann Trophy winner, three 2021 All-Americans, and seven All-Big East selections. Departures include six players due to graduation and four juniors who elected to forgo their senior seasons to enter the professional ranks.

Giannis Nikopolidis – Goalkeeper – A four-year starter and All-Big East Conference selection. A 2020 All-America selection. The Big East Goalkeeper of the Year in 2019 and 2020. Signed professional contract with the New York Red Bulls II of the USL Championship League.

Dante Polvara – Midfielder – Signed a professional contract with Aberdeen F.C. at the conclusion of his junior season. The 2021 MAC Hermann Trophy winner. A 2021 and 2020 All-America team selection. The 2021 and 2020 Big East Midfielder of the Year. Two-time All-Big East First Team member. Appeared in 60 games with 43 starts with 19 career goals and 9 career assists.

Stefan Stojanovic – Forward – Signed a professional contact with the Union II at the conclusion of his junior season. Transferred to Georgetown after two seasons at Saint Louis where he appeared in 29 games with eleven starts. A 2021 All-Big East Second team selection at Georgetown with 22 starts. Scored 9 goals including four game-winners and contributed two assists in 2021.

Chris Hegardt – Midfielder – A 2021 All-Big East Third team selection. Signed a professional contract with Charlotte FC of the MLS at the conclusion of his sophomore season. Appeared in 35 games with 31 starts during two seasons. Had 3 career goals and 7 career assists.

The departures mean that a lot of players will have the opportunity to assume a greater role in 2022. The ability of the players to evolve and grow into new roles and to gel as a team without a lengthy learning curve will have a big impact on the level of success Georgetown has in what will again be a very competitive Big East Conference race.

Brian Wiese stated, “We are extremely excited with the incoming group of student athletes. Once again Connor Klekota and Mike Casper have done a superb job of getting some special players to the Hilltop.” He added, “We think these eight newcomers along with Diego Letayf who joined us in January, will continue to develop and evolve our program. They have big shoes to fill, but I think they all have pretty big feet.”

The Hoyas will be without four of their top five goal scorers from the 2021 season. Junior Marlon Tabora (4g, 6a), the top returning goal scorer, will provide the Hoyas an experienced, productive and high energy presence up-top. Tabora has the touch on the ball and pace needed to create havoc for opposing defenders. Sophomore Ronan Dillow (0g, 3a) who saw action in 22 games last year looks to be among other returning forwards with the potential to assume a greater role and add an additional dimension to the attack up-top. Newcomer Jacob Murrell out of the McDonogh School and Pipeline SC is among the members of the recruiting class who could contribute up-top early on.

Senior Aidan Rocha (1g, 1a) and Juniors Kyle Linhares (0g, 4a) and John Franks (2g, 3a) return to add experience and set the pace for a 2022 midfield that will feature a lot of new faces in more prominent roles. Athletic sophomore center back Joe Buck (1g, 0a) who appeared in 16 games in 2021 looks to be among the returning players who will be counted on to fill the gap that exists in the center of the park due to the departure of Dante Polvara and Chris Heardt. Diego Letayf who joined the program in January is among others who will likely be in the hunt for minutes as a center midfielder. Sophomores Blaine Mabie who played in 8 contests last year and Cole Parete who appeared in one game are among and other returning midfielders who will vie for additional minutes in 2022.

Junior center back Kenny Nielsen (1g, 0a), a 2021 All-Big East Third Team member and two-year starter, and senior Daniel Wu, a 2021 All-Big East Second Team member and two-year starter, return to anchor the back line. The healthy return of Wu who missed the 2020 season and the last five games of the 2021 season due to injury is a big plus. Sophomore outside back Kieran Sargeant (2g, 3a) who played in 20 games with 7 starts last year is coming off a very productive freshman season. Sargeant has the ability to push forward and add an additional element to the offense. Junior Dominic De Almeida who appeared in 13 contest in 2021 with 2 starts looks to be among other returning backs who will be in the hunt for a greater role in 2022. Nielsen, Wu, Sargeant and Almeida give the Hoyas a solid nucleus upon which to build the back line.

The departure of four-year starter Giannis Nikopolidis who made numerous key stops in goal during his tenure at Georgetown creates a crucial void to fill on the defensive side of the ball. Graduate Student and team captain Ethan Koehler who started six games last year with a 0.48 goals against average and three shutouts, sophomore Luca Ulrich who appeared and started in one game in goal last year and juniors Ryan Schewe and Jordan Wells are among returning netminders. Freshman Tenzing Manske could also be in the mix for minutes between the pipes.

What a difference a year can make. The Hoyas enter the 2022 season with the challenge of overcoming the loss of a lot of talent due to the combination of departures due to graduation and players leaving early to enter the professional ranks.

Georgetown is clearly not a stranger to adjusting to the loss of top notch performers. The challenge in 2022 is the number of key departures. You have to go back to 2016 when Georgetown lost six players from the 2015 team to the MLS including three first round picks to find a comparable situation. The Hoyas went from a banner 16-2-3 season in 2015 to a 6-9-2 campaign in 2016. It is not likely that history will repeat itself in that regard in 2022.

To be clear, the challenge that Georgetown faces in 2022 is not a lack of talent but a lack of experienced talent and the potential that creates to lengthen the time it takes for a team to mesh and settle into a rhythm. The Hoyas may not achieve the high level of success in 2022 that they have achieved in recent seasons. Nonetheless a significant drop-off is unlikely.

A nucleus of experienced players return supplemented by a recruiting class that includes several players with the potential to make an immediate contribution. Brian Weise and his staff will have the Hoyas well prepared but due to number of key departures it is realistic to expect a learning curve of sorts in 2022. The length, extent, and impact of it remains to be seen.

A very tough spring schedule that includes games with Wake Forest, Virginia Tech, North Carolina and Rutgers will give the coaching staff the chance to explore various combinations and provide the opportunity to identify and address any areas needing improvement.

Junior Marlon Tabora will give the Hoyas an explosive presence in the attacking third but the Hoyas will need for another player or two to emerge to add balance to the offense up-top.

Replacing what Hermann Trophy winner and All-American Dante Polvara and Chris Hegardt among others brought to the center of the park will not be easy. However, the cupboard is far from bare. Senior Aidan Rocha and juniors Kyles Linhares and John Franks provide a solid contingent around which to rebuild the midfield.

Keep an eye on midfielder Joe Buck and forward Ronan Dillow who are among several several sophomores who look to be ready and eager for a more prominent role and could be difference makers in 2022. The ability and continued development of the sophomores looks to be a key ingredient in the level of success the Hoyas have in 2022.

The departure of All-American defender Sean Zawadski and two-time All-Big East Goalkeeper of the Year Giannis Nikopolidis creates some big shoes to fill on the defensive side of the ball. Nonetheless, the 2022 back line anchored by senior back Daniel Wu and junior back Kenny Nielsen has the potential to be very good. Sophomore back Kieran Sargeant is among other returning players who gained valuable playing time last year and is well prepared to assume a greater role in 2022.

The 2022 season will likely be a transition year and perhaps a good but not necessarily great season for a Georgetown program that has become a national powerhouse under Wiese. Despite major losses, the Hoyas will enter the 2022 campaign with a high national ranking.

Filling the voids that exist will be no small task but don’t think for a minute that the Hoyas won’t continue to have their sights set on winning the Big East regular season and tournament titles and making a sustained run in the NCAA Tournament. Georgetown will continue to be a very difficult opponent to face particularly as the season progresses.

Will the Hoyas be able to overcome the talent and experience they lost and continue their winning ways in 2022? Only time will tell.

Miles Avery – Defender – Washington, D.C. – Woodrow Wilson High School – A four-year starter and three-year team captain with Bethesda SC and prior to that the DC United Academy. Named United Soccer Coaches Player of the Year in 2021.