Creighton Enters The 2022 Season With Momemtum and a Void To Fill On The Offensive Side Of The Ball. 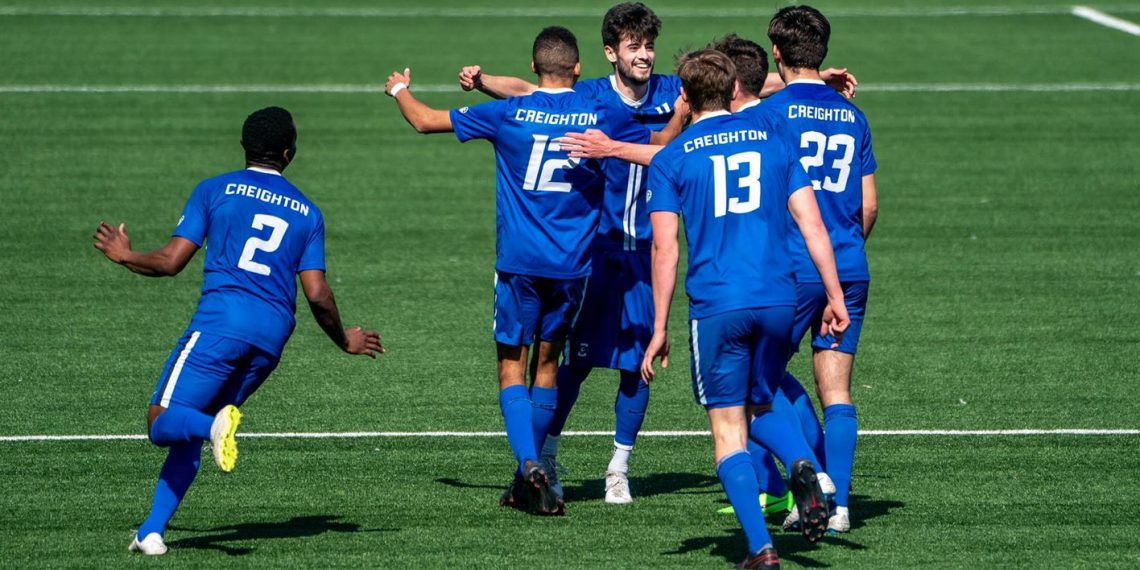 creighton took a step forward Last Year under head coach johnny torres when they returned to the ncaa tournament field for the first time since the 2016 season.

Diego Gutierrez – Forward – Gutierrez transferred to Creighton in 2020 after playing three seasons at Nebraska-Omaha where he was a three-year starter (2017-2019). He powered Creighton’s attack for two seasons. Gutierrez was named the Big East Offensive Player of the Year for the 2020 (spring 2021) and 2021 seasons. He was a 2021 United Soccer Coaches and College Soccer News All-American. In 2020 Gutierrez had five goals and six assists. In 2021 he had ten goals and seven assists.

Manu Toledano – Forward – Toledano played in 19 games with 17 starts. He was the Bluejays second leading goal scorer in 2021 with six goals.

Musa Qongo – Defender – Qongo transferred to Creighton after playing the 2017 and 2018 seasons at Tyler Junior College where he was a United Soccer Coaches NJCAA All-American First Team member in 2018. He was a three-year starter at Creighton (2019-2021). In 2021 Qongo appeared in 18 games with 15 starts with one goal and one assist.

Daniel Espeleta – Midfielder – Espeleta appeared in 63 contests at Creighton with 39 starts. In 2021 he appeared in 21 games with six starts and scored two goals.

It took the Bluejays a while to settle in and jell as a team last year. They rebounded during the second half of the season but dug themselves into a hole early on with a 3-6-1 overall record and 0-4-0 start in Big East play.

Johnny Torres stated, “The addition of these three players provides experience which will benefit our team both on and off the field.”

The departure of forwards Diego Gutierrez (10g, 7a) and Manu Toledano (6g, 0a) means that the Bluejays will be without their top two goal scorers from the 2021 team. The departure of Gutierrez in particular, who created matchup problems for opponents during the two seasons he played for Creighton, makes offensive firepower the biggest unanswered question heading into the 2022 season.

With that in mind, the Bluejays have added transfer forward Alfie Pope out of the Division II University of Mount Olive. Pope found the back of the net a total of 27 times during two seasons at Mount Olive including a 14 goal and 6 assist season in 2021 during which he was named the Conference Carolinas Offensive Player of the Year. There is always a degree of uncertainty in regard to how well a Division II player will make the transition to Division I play, but the potential exists for Pope who is an intriguing addition to be a key part of Creighton’s attack in 2022. Redshirt junior forward Duncan Meyer (0g, 1a) who has had an impressive spring season, redshirt senior Dominic Briggs (1g, 4a) and senior Diego Dutilh (0g, 1a) are among returning forwards who are candidates to step up and assume a share of the responsibilities that fell to Gutierrez the past two seasons.

Creighton will boast one of the better groups of midfielders in the Big East Conference, with senior Callum Watson (2g, 2a), a 2020 and 2021 All-Big East Second Team selection, senior Charles Auguste (1g, 2a), a 2020 All-Big East Second Team member and 2021 All-Big East Third Team selection, graduate student Alejandro Maillet (2g, 1a), a two-year starter, and sophomore Landon Sloan who appeared in seven games in 2021 among returning linkmen. Sophomore transfer Giorgio Probo who was a JUCO All-American and Player of the Year at Iowa Western should also be in the mix in the midfield.

Graduate Student Paul Kruse who has been a big part of the equation on defense for the past four seasons returns in goal to give the Bluejays an experienced and talented presence between the pipes. Kruse has been a starter since arriving on campus as a freshman in 2018 although he was limited to just three starts during the 2020 season due to injury. Krause started 19 contests in 2021 with a 1.25 goals against average. He was a Big East Second Team selection as a freshman in 2018 and a Third Team selection as a senior in 2021.

Creighton loses experienced defender Musa Qongo (1g, 1a) who was a starter for three seasons, but a solid nucleus of backs return including sophomore center back Mark O’Neill (0g, 1a) who now has the advantage of a season of starting experience under his belt, senior Cameron Briggs, senior Mitch Dobson, juniors Jake Ashford and Luke Mitchell and sophomore Miguel Ventura. Freshman defender Fabian Alvarez is among the newcomers who should compete for playing time right away.

A storied Creighton program took a step forward toward regaining a seat at college soccer’s head table in Johnny Torres’ third season as the Bluejay head coach when they returned to the NCAA Tournament field for the first time since 2016. The Bluejays are one of only five programs to punch their ticket to the NCAA Tournament at least 25 times since 1992 but 24 of their appearances came between 1992 and 2016.

The good news is that Creighton will enter the 2022 season with a solid core back from the 2021 team that jelled and improved significantly as the season progressed, established that they had what it takes to win big games, gained valuable NCAA Tournament experience, and look to be a team that is hungry to accomplish more.

The not so good news is that their top two goals scorers including All-American forward Diego Gutierrez have moved on, which could make offensive productivity an issue. Gutierrez found the back of the net 12 times last year. Eight of his goals came during Creighton’s last nine contests including the game-winning goal in the Bluejays 1-0 win over Missouri State in the first round of the NCAA Tournament.

Seven players return who scored last year but only midfielders Callum Watson (2g, 2a) and Alejandro Maillet (2g, 1a) and center back Mark O’Neill (2g, 0a) managed to find the back of the net twice. The solution at Creighton in 2022 may be offense by committee. On the other hand, newcomer Alfie Pope who transfers in from Mount Olive and returning forward Duncan McGuire who had a productive spring season are among the most likely candidates who could emerge as go-to goal scorers. Someone is going to have to step forward and take on some of the responsibility that fell to Gutierrez last year.

The midfield looks to be solid with a level of continuity due to the return of seniors Watson and Maillet and the experience that the returning sophomores gained last year which should reduce the learning curve and inconsistency in the level of play that hampered Creighton during the first half of the 2021 season. The return of Paul Krause in goal along with a solid nucleus of returning backs also is a plus. One of the keys on the defensive side of the ball looks to be finding and settling into a combination in the back early on that will maximize performance.

Creighton will again face a challenging slate of non conference opponents before beginning Big East play against Connecticut on September 17. The slow start last year should provide extra motivation for the Bluejays to hit the ground running in 2022. Creighton has the talent and experience needed to move upward in the highly competitive Big East Conference and return to the NCAA Tournament field if, and that is a big if, lack of offensive firepower doesn’t become a factor.

Fabian Alvarez – Defender – Alajuela, Costa Rica – Represented Costa Rica at the World Cup for U17 and U20 teams.

Giorgio Probo – Midfielder – Bergamo, Italy – A sophomore transfer from Iowa Western where he was named the United Soccer Coaches Association Junior College D1 Player of the Year in 2021 and was a JUCO All-American. Scored three goals and contributed six assists at Iowa Western in 2021.