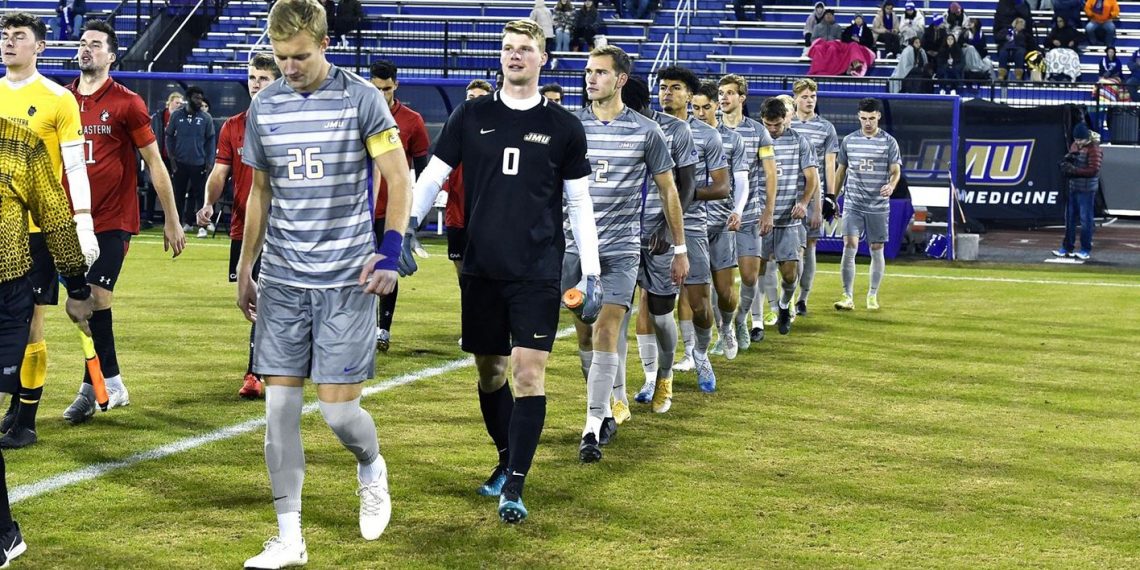 The Sun Belt Conference Resumes Play In Men’s Soccer In 2022 After Being Absent In 2021. The Nine Member Conference Should Be Very Competitive.

West Virginia – The Mountaineers have momentum which makes them a very attractive addition to the Sun Belt Conference. West Virginia is coming off a banner 2021 season under third year head Dan Stafford during which they were 12-3-6 overall, earned the number 11 seed in the NCAA Tournament, and advanced to the Elite Eight for the first time since 1981. West Virginia earned the highest season ending ranking in the history of the program with a number 8 ranking in the United Soccer Coaches and College Soccer News 2021 season ending polls.

West Virginia will be without the services of defender Kevin Morris and goalkeeper Steven Tekesky who were both stalwart five-year starters and forward Yoran Popovic who contributed 5 goals in his lone season at West Virginia. However, a very talented and experienced contingent of players are slated to return which bodes well for another successful season in 2022.

Marshall – The Thundering Herd move to the Sun Belt Conference from Conference USA where they were a member from 2005 through 2021. Upstart and unseeded Marshall surprised everyone, with the possible exception of head coach Chris Grassie, when they won the 2020 National Championship leaving several blue blood programs in their wake.

Marshall under Grassie emerged on the national scene in 2019 with a 16-3-3 overall record, they followed that up with the afore mentioned 13-2-3 season and national championship in 2020, and a 11-4-3 record and third consecutive invite to the NCAA Tournament in 2021.

Another run to the national championship may not be in the cards for Marshall in the near future but you can bet the farm that Grassie will field a very competitive possession oriented team that will have the type of balance, organization, and patience on both sides of the ball that will make them a difficult opponent to face.

Marshall also has a vibrant fan base which is a plus for college soccer in general and the Sun Belt Conference.

The Herd will also have to fill the very big shoes of center back Nathan Dossantos , the 2021 CUSA Defensive Player of the Year and a two-year starter at Marshall after transferring in as a junior from Duquesne and back Jan-Erik Leinhos (1g, 3a) who was a 2021 All-CUSA Second Team member and four-year starter.

The cup is far from bare at Marshall so a significant drop-off is unlikely. Redshirt senior forward Milo Yosef (3g, 8a), a 2021 All-CUSA First Team selection, who has 19 goals and 15 assists during three seasons to date returns to power the attack up-top and senior Max Schneider (2g, 2a) and graduate student Vinicius Fernandes (6g, 8a) who were 2021 All-CUSA Second Team members return to set the pace in the midfield. Graduate Student Oliver Semmle will anchor the defense in goal along with backs junior Gabriel Alves and graduate student Collin Mocyunat among others.

Georgia State – The Panthers return to the Sun Belt Conference in 2022 after a one year stay in the MAC. Georgia State which is located in Atlanta is a very competitive and some would say underrated program with a winning tradition under head coach Brett Surrency.

The Panthers are coming off a 13-7-0 season during which they had signature wins over Akron and West Virginia and earned the program’s fifth berth in the NCAA Tournament. They then topped a good Charlotte team in the first round of the NCAA Tournament before losing on the road to Georgetown 2-0 in the second round.

Georgia State returns eight starters from a 2021 team that on a given night could hold their own with anyone. The Panthers should again be very competitive. However, they will have to adjust to life without defender George Proctor who had a banner tenure in Atlanta during which he was a five-year starter with a resume that included being named a 2021 All-American by College Soccer News and the 2020 Sun Belt Conference Player of the Year.

Kentucky has earned a berth in the NCAA Tournament in eight of the ten seasons that Johan Cedergren has been at the helm of the program. The Wildcats are a great addition to the Sun Belt Conference and will be among the frontrunners to capture the conference title in 2022. The Wildcats are coming off a 15-2-4 season during which they won the CSUA Tournament title, were awarded the number nine seed in the NCAA Tournament, and advanced to the Sweet Sixteen where they were defeated 2-1 by eventual national champion Clemson.

Kentucky will enter the 2022 season without the services of All-American goalkeeper Jan Hoffelner who anchored a stout Kentucky defense that only allowed a total of 11 goals in 2021. They must also replace midfielders Marcel Meinzer and Bailey Rouse who were were four-year starters and stalwart performers.

On the positive side of the ledger the Wildcats return a solid contingent of talented and experienced defenders including junior Luis Grassow and seniors Robert Screen and Mason Visconti. Senior goalkeeper Ryan Jack who transfers in from Western Michigan were he was a multi-year starter should contend for the vacant spot between the pipes.

Senior Daniel Evans (5g, 0a) and junior Eythor Bjorgolfsson (5g, 1a) will add punch to the attack up-top. Junior Nick Gutzman (3g, 5a) and sophomore Enzo Mauritz (5g, 1a) are among returning midfielders. Junior midfielder Brennan Clark who transfers in from Western Michigan is among the newcomers who could contend for minutes right away.

James Madison – The Dukes join the Sun Belt Conference after playing in the Colonial Athletic Association for 38 years.

JMU has been a staple in the national rankings with a winning tradition that includes 17 appearances in the NCAA Tournament including three of the last four seasons and CAA titles in 2018, 2019 and 2020 during the four years to date that Paul Zazenski has been the head coach.

The Dukes are coming off an 11-5-1 season in 2021 with a 5-3-0 mark in CAA play. Look for a hungry and focused James Madison team to contend for the Sun Belt title race in 2022 and a berth in the NCAA Tournament with a roster that includes ten returning starters and six 2021 All-CAA selections. The departure of goalkeeper Martin Leu who had a 1.00 goals against average last year creates the lone key gap to be filled.

Alan Dawson will enter his 26th season as the Monarch’s head coach with a resume that includes 12 appearances in the NCAA Tournament with the last being in 2017, three conference tournament titles and three regular season titles. Dawson knows what it takes to win at the highest level but will enter the 2022 season with a team that will require significant improvement on both sides of the ball in order to have a chance to play their way into the upper half of the Sun Belt Conference standings.

The Dukes look to be a work in progress after a 2021 season during which they where 3-9-2 overall with a 1-5-2 mark in CUSA play. There will likely be a lot of new faces on the pitch and a learning curve of sorts for an ODU team that only found the back of the net 12 times last year while allowing opponents to score 27 times. That ratio has to be reversed. Sophomore midfielder Karan Mandair (4g, 0a) is ODU’s top returning goal scorer.

Regardless, the Monarchs are a very solid addition to the Sun Belt and it would be a mistake for any opponent to look past them. In addition, the Old Dominion and James Madison conference match-up adds a little extra something for both programs.

Coastal Carolina – The Chanticleers return to the Sun Belt Conference after a single season as an affiliate member of Conference USA in 2021.

Coastal Carolina brings a team to the conference that has been a regular in the national rankings over the years with a total of 17 appearances in the NCAA Tournament. The Chanticleers have punched their ticket to the NCAA Tournament ten times since 2010 with the most recent being the 2020 season (spring 2021). Coastal Carolina is coming off a good but by no means vintage Chanticleer season in 2021 during which they were 6-5-4 overall with a 3-1-4 mark in CUSA play.

Shaun Docking will enter his 25th season at the helm of the program with a 301-143-44 overall record and a program that often has a roster of talented attack oriented players with the skills needed to play an exciting up-tempo style of soccer. Coastal will enter the 2022 campaign with a good number of gaps to fill due to departures so a learning curve is likely in the early going. The Chanticleers will be competitive but may be a season or two and a player or two away from having the ingredients and chemistry needed to challenge for a Sun Belt title in 2022.

Returning players who look to be in the mix include sophomore forward Alvaro Garcia-Pasqual (6g, 2a) who was a 2021 All-CUSA Second Team selection, midfielders graduate student Marcello Jones (3g, 3a) and senior Emile Rzepecki (1g, 1a), and defenders senior Dimitris Moraitakis and junior Mael Couteau. If the Chanticleers jell as a team early and everything falls into place they will be a difficult opponent to face down the home stretch.

Georgia Southern – The Eagles under head coach John Murphy return to the re-formed Sun Belt Conference after a single season as an affiliate member of the MAC.

Georgia Southern is coming off a 4-12-1 overall record and 0-5-1 mark in MAC play in 2021 and a 1-9-0 overall record and 0-6-0 mark in Sun Belt play in 2020. The Eagles scored a total of 15 goals in 2021 while allowing 40 and scored a total of 5 goals during the 2020 season while allowing 28. The potential exists for improvement at Georgia Southern in 2022 since positives exist that can be built upon. However, it will require significant improvement on both sides of the ball in order for the Eagles to move out of the cellar of what will be a very competitive Sun Belt schedule in 2022.

South Carolina began the Tony Annan era in 2021 when Annan took over the reigns of the program from Mark Berson who served as the mentor of the South Carolina program for the first 43 years of its existence. During Berson’s tenure the Gamecocks appeared in the NCAA Tournament 21 times with the 2015 season being the most recent. They advanced to the College Cup in 1988 and 1993.

As would be expected, the 2021 season was a year of transition for South Carolina with a 5-9-2 overall record and 1-5-2 mark in CUSA play. Junior forward Peter Clement (4g, 3a), a 2021 All-CUSA Second Team selection, and senior forward Logan Frost (4g, 3a), a 2021 All-CUSA Third Team member, are among returning players who Annan will likely count on for offensive productivity in 2022. Redshirt senior Ryan Bilickhk who started 10 games last year and sophomore Tristan Himes who started six contests return in goal.

Chances are pretty good that the Gamecocks will increase their win total in 2022 as they begin to sort out and settle into an identity as a team under Annan.