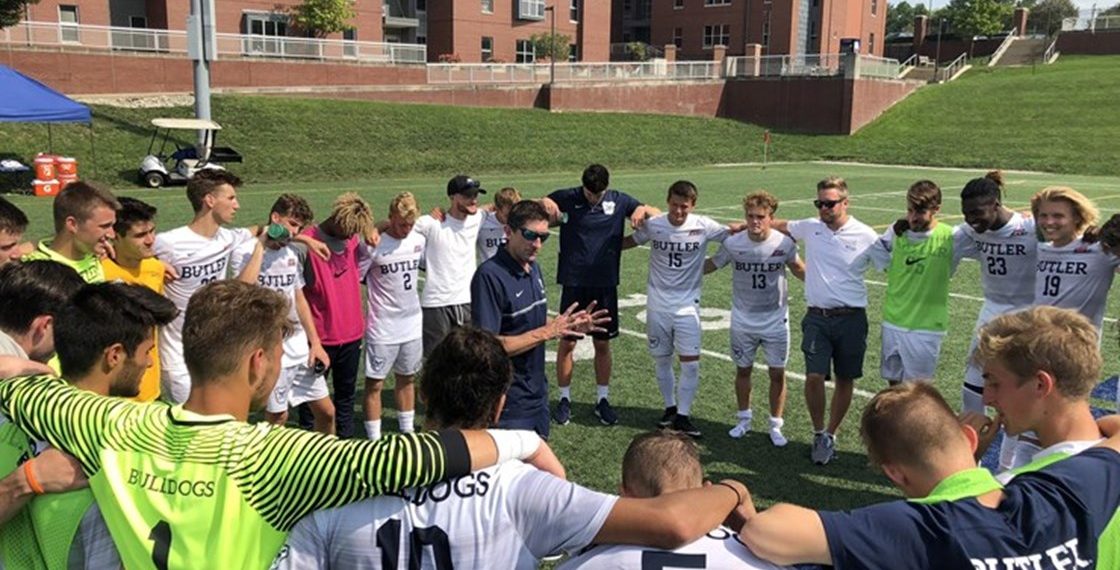 Paul Snape has added a ten member recruiting class that includes several potential impact players. Butler will enter the 2019 season focused on regaining the momentum the program had in 2016 and 2017. Junior defender Rhys Myers who transfers in from Eastern Florida State where he was an NJCAA Second Team All-America selection is among the newcomers who should strengthen the defense. Forward Wilmer Cabrera Jr. who played for the Rio Grande Valley FC Toros and midfielder Tommy Visser who played for Midfwest United FC are among the new recruits who are likely to add additional punch to the offense.

Departures and Gaps – The Bulldogs will be without seven seniors from the 2018 team. Key departures include midfielder Marco Charalambous (0g, 4a) who was a three-year starter, defenders and team captains Joe Moulden (1g, 0a) and Kieran Geldenhuys (1g, 2a) who were four-year starters, and defender Michael Peay (2g, 0a).

Opportuniities for Improvement – Butler was hampered last year by their inability to put together a full ninety-minutes of play. In six of their twelve losses they were either tied or ahead at halftime. The Bulldogs allowed a total of thirty-nine goals including twenty-one in Big East play. In four contests (Creighton, Providence, Marshall, Xavier) they allowed their opponent to score three times during the second stanza of play. Butler's early season 2-1 loss at home to Drake during which they allowed two goals in the last ten minutes of play was a mirror into the entire season.

The number of young players on the pitch in 2018 was likely among the factors that contributed to a lack of toughness and inconsistent play. Chances are pretty good that the experience the current sophomores gained last year will enhance their effectiveness and resolve in 2019. In that regard look for the level of improvement in the play of sophomore midfielders Jack Haywood (1g, 4a), Logan Lee (3g, 0a) and Eric Hollenkamp (1g, 0a), defenders Louie Bulger (1g, 1a) and Griffin DeBolt, and goalkeeper Gabriel Gjergji to be among the critical success factors at Butler in 2019.

Summary – The Bulldogs went into an unexpected freefall last year with a 4-12-2 overall record and a 2-7-0 mark in Big East play. It was a disappointing setback for a Butler team that entered the 2018 season off back-to-back appearances in the NCAA Tournament and a resume that included winning the Big East Conference Tournament in 2016 and the Big East regular season title in 2017.

Paul Snape has built a solid program at Butler so despite a subpar 2018 campaign, there are indicators that the Bulldogs will get back on track in 2019. However, it will require tangible improvement in the level of play and consistency on both sides of the ball in order for upward movement to occur in the highly competitive Big East Conference where any weaknesses that exist are exploted. The spotlinght on the offensive side of the ball will again be on senior forward Brandon Guhl (7g, 4a) who has powered the Butler attack the past two seasons during which he scored a total of twenty goals. Redshirt senior, team captain, and three-year starter Jared Timmer (2g, 1a) and senior Derek Hutton (1g, 1a), a two-year starter, will set the pace in the midfield. Senior back/midfielder Alex Lehtinen (4g, 3a), a three-year starter, and sophomore goalkeeper Gabriel Gjergji who now has a year of starting experience under his belt will anchor the defense.

Jack Woods – Forward – Westlake, Texas – Westlake Academy – Redshirted the 2017 season at Butler. Transfered to Midwestern State in 2018 where he played in one contest.. Transferred back to Butler in 2019.  Played for Solar Chelsea U18 Development Academy.