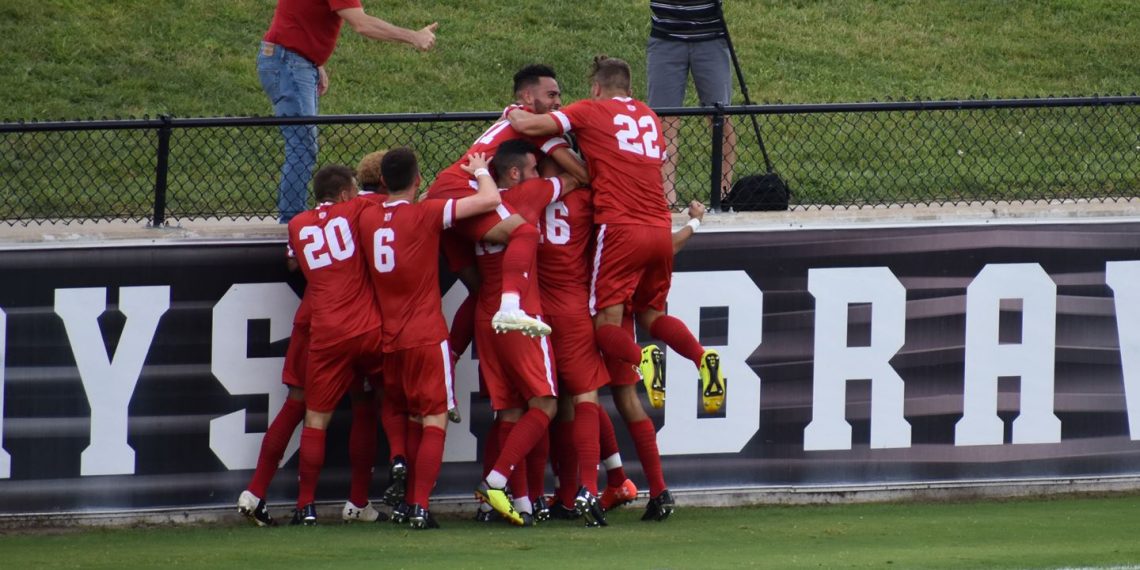 Bradley brings on board a supersized thirteen member recruiting class that includes twelve freshmen and one junior transfer. The newcomers add the athleticism that has been the hallmark of the best teams at Bradley under Jim DeRose.

Departures and Gaps – The Braves will be without seven seniors from the 2018 team.  Key departures due to graduation include forwards Frank Bak (0g, 8a), Austin Bell (0g, 2a), Richard Olson (0g, 1a) and Daniel Gardner and defensive midfielder Alex Ciaramitaro (3g, 0a) whose play was limited in 2018 due to injury. Bradley will also will be without All-MVC Second Team midfielder Younes Dayekh (2g, 4a) from San Jose, California who transferred.

Opportunities for Improvement – Additional productivity, consistency, and balance on the offensive side of the ball.

Coach's Recruiting Class Comment – Jim DeRose stated, "The group of student-athletes covers a large geographic area and brings positional diversity, technical and tactical quality and the ability to contribute to our team immediately. The depth of our returning players is great and we expect the new additions to enhance our competitive training environment and quickly adapt to the high level of Division I college soccer."

Summary – Bradley was somewhat of an enigma last year. They were undefeated as long as they were playing teams outside of the Missouri Valley Conference going 7-0-4 against non-conference competition but they were 1-5-0 in MVC play and didn't qualifify for the conference tournament. Bradley was able to squeeze out good wins against non-conference opponents but were surprisingly a bit overmatched when it came to coming up with the big plays needed to prevail in conference play. Their lone win in MVC play was a 1-0 victory over Drake in which forward Gert Wintermeyer scored the game winning goal with less than a minute remaining in the first overtime period.

Bradley began the 2018 season with a 5-0-2 record and at that point looked like a team that would contend for the conference title but after a 3-0 loss to Central Arkansas in their first MVC contest they appeared to have trouble finding the right balance between offensive productivity and defensive stability.  Perhaps the mystery can be explained in part by early season injuries to goalkeeper Nathan Wisbey and midfielder Alex Ciaramitaro and an injury that hampered the play of forward Roman Schindler for a good amount of the season. Regardless, after a very promising start, Bradley appeared at times to focus more on containing their opponents rather than on pressing the attack.  Last year the Braves held opponents to a total of only nineteen goals but they only produced a total of twenty. In MVC play they allowed a total of twelve goals while only scoring five with three of their five goals coming during a season ending 4-3 loss to Evansville.

There is reason for cautious optimisim heading into the 2019 season. Bradley returns eight players who were starters last year and a roster that is junior/senior heavy which sets up well for a better showing in conference play. However, it is highly likely that Bradley will again have a small margin for error in 2019 particularly in MVC play.  As a result chances are pretty good that their ceiling in 2019 will hinge on their ability to find and maintain a balance that will permit a more explosive attack while continuting to play solid team defense.

The Braves will enter the 2019 season with the luxary of having the combination of junior Gerit Wintermeyer (8g, 4a) who was the bright spot on the offensive side of the ball last year and a now healthy senior Roman Schindler (3g, 1a) to power the attack up-top. Wintermeyer who was a 2018 All-MAC First Team selection led the Braves with eight goals last year while Schindler was Bradley's top goal scorer in 2017 with seven goals. They have the potential to provide Bradley with a one-two punch that could present problems for opposing defenders and increase the Brave's offensive productivity. Although Wintermeyer and Schindler will likely power the attack, others need to emerge to add balance to the offense. Redshirt senior Jha'Lon Johnson (1g, 1a) who has been a starter the past two seasons and sophomore Nick Feeney who saw action in seven contests last year also return up-top.  Newcomer Danny Collins who honed his skills playing with St. Louis FC Academy is among the members of the recruiting class who could add an additional dimension to the offense up-top.

The midfield is a bit of a question mark. Senior John Pollifrone (1g, 1a) who has been a starter for the past three seasons is among the returning midfielders who will set the pace.  Senior Saadiq Mohammed who transferred in last year from Saint Louis and played in twelve contests last year and junior Mickey Conneh who transferred in from Penn State during the winter break are among those who look to be in the mix in the midfield.

Redshirt senior Walid Kherat (1g, 1a), senior Jacob McKee, redshirt junior David Kovacevic and junior Jordan Walpole are among a solid continget of returning backs. Freshman Cameron Strang out of the Galaxy Soccer Club looks to be among the members of the recuriting class who could see heavy mintues in the back. Redshirt senior Albert Reinwart who played in fifteen contests last year and senior Nathan Wisbey who was the starter in the first two games of the 2018 season before breaking his arm, and sophomore Nick Gasperi return in goal to give the Braves a very solid continget between the pipes.

Bradley is a team to keep an eye on in 2019. Whether or not the Braves will have the offensive punch and the toughness on the defensive side of the ball needed to consistently grind out wins in the tight games remains to be seen but it is hard to not feel that the potential exists for significant improvement in MVC play in 2019.