Women’s College Soccer. What Happened At A Glance In Wednesday’s First Round Contests In The 2020-2021 NCAA Tournament. 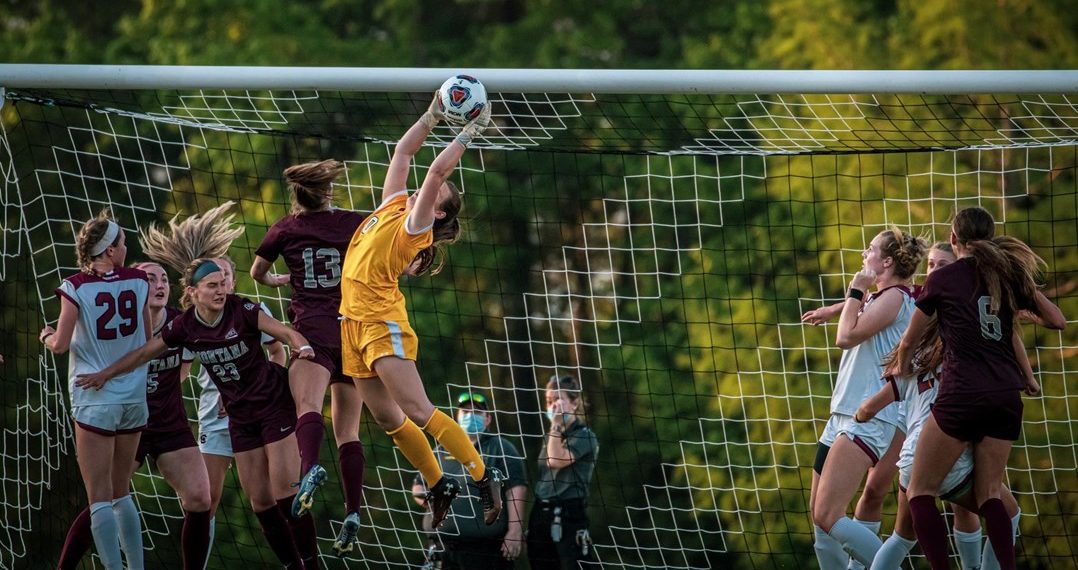 Eight More Teams Survive And Advance To The Second Round.

Milwaukee 1 – Elon 0 – The difference between a win and a loss is often very slight.  Milwaukee combined a patient yet aggressive offense with a solid defensive effort to secure the win. Senior forward McKenna Stratton came up with the big play that the Panthers needed on the offensive side of the ball in the 77th minute of the match when she utilized her left foot to send the rebound of junior forward Julia Barajas’ shot into the back of the frame.  The goal was Statton’s first of the spring season.

The contest started slowly with neither Milwaukee or Elon able to settle into a rhythm on the offensive side of the ball in the first half.  As the game progressed Milwaukee began to settle in and control the tempo of the match in the second half. The Panthers held a 10 to 6 advantage in shots and a 6 to 1 advantage in shots on goal for the evening.

McKenna Dalfonso had three saves in goal for Elon while junior Elaina LaMacchia had one save in goal for Milwaukee to record her sixth shutout of the spring season.  LaMacchia, an All-Horizon League Second Team selection, has anchored a Milwaukee defense that has allowed a total of only three goals to date.

Milwaukee out of the Horizon League is unbeaten in their last seven contests. The Panthers are 9-1-1 and advance to face undefeated number one seed Florida State out of the Atlantic Coast Conference on Saturday in Cary, North Carolina.

Elon under head coach Neil Payne was making its second-ever appearance in the NCAA Tourney. The Phoenix out of the Colonial Athletic Association concluded a successful season during which they were 6-4-0 overall and earned the programs first CAA Championship.

Penn State 5 – Alabama State 0 – The Nittany Lions rebounded from a 1-0 loss to the Iowa Hawkeyes in the semifinals of Big Ten Tournament to dominate an Alabama State team in the first round of the NCAA Tournament.

Penn State came out on the front foot pressing the attack from the get-go with five shots in the first ten minutes of the contest.  Penn State had a commanding 4-0 advantage at halftime with Frankie Tagliaferri scoring in the eighth minute after receiving a cross from Payton Linnehan and in the 28th minute with a double assist from Ally Schlegel and Linnehan to give Penn State momentum that they would never relinquish. Tagliaferri has now scored six times in Penn States last five games.

Linnehan scored to make it 3-0 in the 28th minute of the match after receiving a through ball from Sam Coffey . Olivia Damico made it 4-0 after receiving a pass from Elle Kershner the 32nd minute.  The final Nittany Lion goal was the result of an own goal in the 73rd minute.

Freshman Madison Roop had eleven saves in goal for Alabama State. Katherine Asman had one save in goal to record the shutout for Penn State.

Penn State improves to  11-2-1 and advances to face Vanderbilt out of the SEC on Saturday in the second round.

Alabama State out of the Southwestern Athletic Conference under veteran head coach Jodie Smith entered the contest on a 10-match unbeaten streak. The Lady Hornets conclude the spring season with a  9-3-1 overall record.

Arizona State 4 – Siena 0 – This one was close for the first half with junior forward Nicole Douglas netting the lone goal of the half for the Sun Devils in the 10th minute of play when she alertly one-timed  the deflection of teammate Eva van Deirsen’s shot into the back of the net.

Arizona State picked up the pace in the second stanza and the pressure paid off with defender Lucy Johnson scoring in the 62nd minute to increase the lead to 2-0. Sophomore defender Lieske Carleer scored out of a free kick in the 70th minute to put the game on ice with a double assist from Johnson and senior forward Olive Jones. Junior Cori Sullivan scored in the last minute of the match to make it 4-0.

Both coaches emptied their benches with 20 different players seeing playing time for Siena while 22 appeared on the pitch for Arizona State.

Arizona State out of the Pac-12 improves to 9-5-2 and keeps a banner season alive. The Sun Devils advance to the second round where they will face number nine seed Duke out of the ACC on Saturday.

To their credit Siena under head coach Steve Karbowski fought to the end. The Saints conclude a very successful momentum generating season with a 6-1-2 overall record that they will seek to build upon in the future.

Rice 3 – Furman 1 – Rice secured the program’s first ever win in the NCAA Tournament with an impressive win over a good Furman team.

Soccer is a game of opportunity and Rice did a good job of staying focused and taking advantage of the opportunities that came their way. The Owls applied pressure from the opening touch but Furman got on the board first compliments of a goal from redshirt sophomore forward Kyndal Anderson who slotted a shot into the lower-left corner of the goal after receiving a pass from freshman forward Nieva Gaither.

The Owls kept their composure and the momentum shifted their way when freshman forward Natalie Gorgi converted a header in the 25th minute out of a throw-in. Gorgi then sent a blast into the back of the frame from just inside the box in the 37th minute that was set up by a pass from Delaney Schultz. Rice entered intermission with a 2-1 advantage.

Freshman midfielder Mikala Furuto made it 3-1 Rice when she scored with Schultz providing her second helper of the game in the 66th minute to conclude the scoring for the evening.

The Owls out of CUSA improve to 13-2-1 and advance to the second round on Saturday where they will tangle with number five seed West Virginia.

Virginia 3 – SIUE 1 – This one looked like it had the potential for an upset when SIUE  sophomore forward Maria Hero scored after receiving a pass from Megan Keeven to give the Cougars a 1-0 advantage in the 11th minute of the match.  It appeared that SIUE would go into intermission with a lead but Virginia stuck to their game plan and the momentum shifted there way when junior forward Alexa Spaanstra pushed forward down the right flank and utilized her touch on the ball and quickness to cut back into the box where she placed a shot into the net to knot the score at 1-1.

The Cavaliers took charge in the second have when Spaanstra converted a penalty kick after being taken down in the box in the 57th minute of play to go up 2-1. Virginia then received an insurance goal in the 69th minute when Talia Staude sent a header into the back of the net out of a corner kick.

The early SIUE goal proved to be a wakeup call for a Cavalier defense that tightened up and allowed SIUE only one shot on goal in each half.

Virginia out of the ACC improves to 11-4-2 and advances to face number 12 seed BYU in what shapes up to be a marquee second round matchup between two teams with the potential to make a deep run.

South Carolina 1 – Montana 0 – This hard fought contest falls into the grind variety.  Freshman forward Corinna Zullo came up with the big play that the Gamecocks needed to break the code on a tough Montana defense in the 56th minute of the match. Senor Ryan Gareis opened up the field of play with a move down the left flank and a well played cross into the box which Zullo decisively headed into the goal.

South Carolina out of the SEC improves to 11-4-0 and advances to the second round for the fifth year in a row where they will tangle with a very good Georgetown team on Saturday.

Montana out of the Big Sky Conference closes out the spring season with a great deal of pride in a very successful 9-2-0 overall record.

Utah Valley 1 – Memphis 0 – Utah Valley took a history making step forward when they secured the programs first ever win in the NCAA Tournament. Sadie Brockbank scored what proved to be the game winner in the 60th minute when she utilized her left foot to send a floater into the back of the net. Amber Tripp and Julianna Carter provided the double assist on the goal.

Redshirt senior Isabel Jones-Dawe anchored a Wolverine defense along with backs freshman Grace Beeston, redshirt sophomore  Jenna Shepherd, sophomore Nicole Olanda and sophomore Sydney Bushman that was able to contain a Memphis attack that had 15 shots including 5 on goal as compared to Utah Valleys 7 shots with 4 on goal.  The Tigers pressed the attack with several near misses.

Utah Valley out of the WAC  improves to 13-4-4 and advances to face Arkansas in the second round.

Memphis concludes the spring season with an 8-4-0 overall record.

Ohio State 5 – Stony Brook 1 – The Buckeyes took control early on in this goal-a-rama contest with Alysa Baumbick making a nice move after receiving a pass from Kayla Fisher to find the space and angle she needed to drive a shot into the back of the frame from inside the box to give Ohio State a 1-0 advantage.

Sophomore Emma Sears made it 2-0 when she pushed forward at speed off the dribble after receiving a through ball from Peyton McNamara and drove a shot from the top of the box into the left bottom corner of the frame.  The goal was Sears seventh of the season and the Buckeyes looked to be fully in control.

Stony Brook looked like they might get back into it when Rachel Florenz scored in the 18th minute to narrow the gap to 2-1 but that was not to be the case.

The Buckeyes continued to press the attack with Baumbick contributing her second goal of the day in the 20th minute to make it 3-1. Kitty Jones-Black made in 4-0 Ohio State with a goal in the 40th minute to close out the half with the Buckeyes in control 4-1. Meghan Kammerdeiner added the final Ohio State goal in the 75th minute.

Ohio State improves to 8-2-3 and advances to face number eleven seed Santa Clara on Saturday. Stony Brook closes out the year with a 6-4-0 record.