Women’s College Soccer. A Look At What Happened In The First Round Of Play In The 2020-2021 NCAA Tournament. 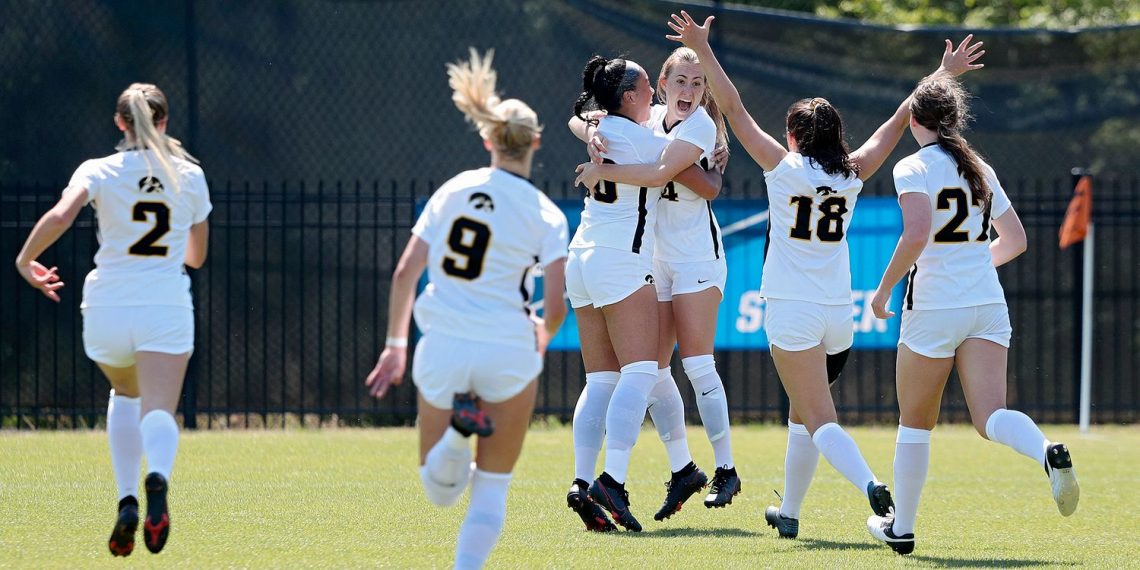 Eight Teams Survive And Advance To The Second Round Of Play.

Iowa 1 – Campbell 0 – Iowa’s improbable yet magical season continues. Last week the Hawkeyes defied the odds by upsetting Penn State 1-0 and Wisconsin 1-0 to win the programs first ever Big Ten Championship. They added another first on Tuesday by topping Campbell 1-0 to secure their first win in the NCAA Tournament.

Junior defender Sara Wheaton scored what proved to be the game-winning goal in just the fourth minute of the match when she scored out of a corner kick put in play by sophomore defender Samantha Cary.

A tenacious team-oriented Hawkeye defense anchored by backs Wheaton, Cary, senior Diane Senkowski, freshman Aleisa Ganief and junior Olivia Hallweg and freshman goalkeeper Macy Enneking who had a three save evening kept Campbell off the board for the remainder of the contest.

Iowa improves to 7-8-1 and moves forward to face number three seed UCLA out of the Pac-12 on Friday in Buies Creek, North Carolina. Whether or not the clock will strike twelve for a determined Iowa team in that match remains to be seen.

South Florida 3 – Central Connecticut State University 0 – The unanswered question heading into this contest was whether or not South Florida could find a way to breakdown a CCSU defense that had allowed a total of only one goal in seven contests during regular season play.

Neither team was able to score during the first half of play and that question remained unanswered at intermission. South Florida answered it in the affirmative in the second stanza when freshman midfielder Chiara Hahn converted a header out of a free kick to break the ice in the 52nd minute of the match with an assist from midfielder Katie Kitching.  Senior midfielder Paula Leblic added the second goal for the Bulls in the 64th minute to give South Florida a 2-0 lead and a little breathing room. Freshman defender Vivianne Bessette out of the Monteverde Academy scored in the 71st minute to put the contest on ice for South Florida and conclude the scoring for the evening.

The Bulls under head coach Denise Schilte-Brown improve to 10-0-2 and advance to face number seven seed Texas A and M on Friday at Bryan Park in Greensboro, North Carolina.

CCSU under head coach Mick D’Arcy sustain their first loss of the season to conclude the spring campaign with a very productive 7-1-0 overall record during which they won the NEC title for the third consecutive season.

Mississippi 0 – Bowling Green 0 – Mississippi advances 4-3 in penalty kicks – This one easily could have gone either way.  It is always a heartbreaker when a contest has to be decided by a penalty kick shootout but there has to be some way to determine who advances. The effort was there but neither team was able to come up with the big play needed on the offensive side of the ball out of the run of play or a restart during regulation or extra time.  Bowling Green had 13 shots with 3 on goal while Ole Miss had 12 shots with five on goal.

Both Mississippi goalkeeper Ashley Orkus and Bowling Green netminder Lili Berg came up with the stops that they needed to make to give their team the opportunity to prevail. Orkus had three saves in goal during 110 minutes of play while Berg had five. The penalty kick shootout required seven rounds to determine who advanced. Berg had two stops during the shootout while Orkus had three. Junior midfielder Haleigh Stackpole, senior Madisyn Pezzino, freshman Lucy Green and sophomore Mo O’Connor converted their penalty kicks for Mississippi.

Ole Miss (10-5-1) out of the SEC survives and advances to face USC out of the Pac-12 Conference in the second round on Friday in Wilmington, North Carolina.

Bowling Green out of the MAC under the direction of first year head coach Jimmy Walker concludes an excellent season of play with a 6-1-1 overall record during which they scored a total of 17 goals while only allowing 3.

Denver 3 – Loyola Chicago 1 – Loyola Chicago came into this one hoping to secure their first ever win in NCAA Tournament play but despite a great start it was not to be. Those on hand at the Sportsplex in Matthews, North Carolina had barely settled into their seats when junior midfielder Abby Swanson drove a header served in by sophomore defender Olivia Knab into the back of the frame out of a corner kick just 43 ticks into the contest to give Loyola Chicago an early 1-0 advantage.

Denver kept their composure and knotted the match at 1-1 when junior forward Sami Feller alertly headed a rebound into the net. The goal was Feller’s ninth of the spring season. The scored remained 1-1 at halftime. Denver came out firing in the second half and took control of the game with goals from sophomore forward Sydney Sharp in the 61st minutes with an assist from Feller and sophomore midfielder Kaitlyn Glover in the 84th minute with sophomore forward Sydney Sharp providing the helper. With the exception of the early goal by Loyola Chicago, redshirt sophomore Nerea Arrazola was a brick wall between the pipes for Denver with an eight save evening. Sophomore Grace Droessler had four saves in goal for the Ramblers.

Denver (17-2-1) marches forward to face second seeded North Carolina on Friday in Matthews, North Carolina. The win was the Pioneers first in NCAA Tourney play since 2012.

Loyola Chicago played well but at the end of the day the difference in the contest was that Denver did a better job of taking advantage of the opportunities to score that came their way. The Ramblers out of the MVC conclude a successful season with a 8-2-1 overall record.

New Mexico 1 – Navy 1 – New Mexico advances 4-2 in penalty kicks – Navy jumped out to a 1-0 lead 29 seconds into the contest with Molly Gillcrist contributing the goal. It looked like that might prove to be the difference in the contest after junior Alesia Garcia’s penalty kick was blocked by Navy goalkeeper Mattie Gallagher in the 67th minute. However, Garcia and her teammates remained focused on the task at hand and Garcia responded with a goal in the 71st minute with an assist from freshman Paige Sattlerlee to knot the score at 1-1.

The contest remained tied after 110 minutes of play. Emily Johnson came up big for the Lobos with two stops during the ensuing pk shootout that paved the way for the Lobos (10-1-1) to prevail in the shootout 4-2 and advance to face number four seed TCU on Friday at Gillette Field in Wilson, North Carolina.

Navy concludes the spring season with a 4-4-3 overall record during which they secured the Patriot League Championship.

South Alabama 1 – Colorado 0 – Defender Tilly Wilkes’ goal in the 58th minute of play proved to be the difference in this hard fought back and forth contest. Colorado out of the Pac-12 had a 14 to 9 advantage in shots. The Buffs pressed the attack after going down a goal but they were never fully able to put the combinations together in the attacking third that they needed to secure a goal. Both teams had three shots on goal.

South Alabama improves to 14-8-1 and advances to face Oklahoma State on Friday. Colorado closes out the 2021 spring season with a 9-6-2 overall record.

Washington 3 – Liberty 0 – Washington did the things that they needed to do on both sides of the ball and pretty much controlled this one from the get-go. Senior midfielder Ameera Hussen scored for Washington less than two minutes into the game and the Huskies never looked back. Junior forward Karlee Stueckle added an insurance goal in the 41st minute with an assist from Mary Johnston and the teams went into halftime with the Huskies up 2-0. Senior midfielder Olivia Van der Jagt scored out of a free kick seven minutes into the second half to make it 3-0 Washington to conclude the scoring for the evening.

The Huskies improve to 10-3-3 and advance to the second round where they will face number 15 seed Saint Louis on Friday.  Liberty out of the ASUN Conference closes out the spring season with a 7-6-5 overall record.

Nadine Maher was outstanding in goal for Southeastern Louisiana with nine saves while Megan McClelland had two saves in goal to secure her seventh shutout of the spring season for the Scarlet Knights. Juniors Claire Huston and Jamie Raines and freshmen E.J Jones and Halli Roe were part of a tough bend but don’t break SLU defense that was under pressure most of the match.

Southeastern Louisiana, the Southland Conference Tournament Champions, under the direction of head coach Chris McBride conclude a very productive spring season with an 8-3-4 overall record upon which they will seek to build.