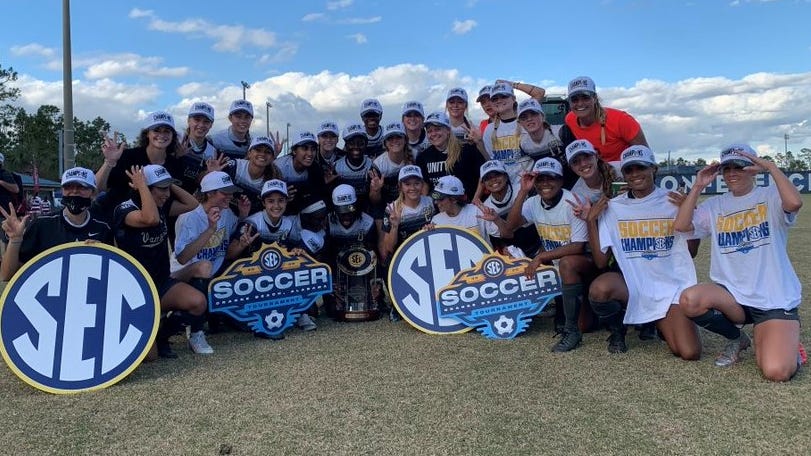 It began Back on November 13 with all fourteen SEC teams participating in the Women’s Conference Tournament at the Orange Beach Sportsplex in Orange Beach, Alabama. It ended on November 22  when the last two teams standing, Vanderbilt and Arkansas, squared off with the SEC Championship on the line. Vanderbilt had defeated Mississippi State 4-0, Tennessee 4-2 and Texas A & M 3-1 to punch their ticket to the championship match. Arkansas had defeated Auburn 4-3 and South Carolina 2-1 to advance to the title match.

There were two major storylines heading into the SEC Championship contest between number seven seed Vanderbilt and number one seed Arkansas.

Could number seven seed Vanderbilt defy the odds by winning their fourth straight game and continue a magical run that already included wins over the number two and three seeds?

Could an Arkansas team that had advanced to SEC championship match for the fifth year in a row win it for the first time this year?

The short answer was yes to the Vanderbilt storyline and no for Arkansas storyline. The longer answer was that a red hot Vanderbilt team under the direction of head coach Darren Ambrose did defy the odds prevailing 3-1 to secure the programs first SEC Tournament title since 1994 while scoring a total of fourteen goals to establish a new tournament record.

It was a disappointing loss for Arkansas but nonetheless another very successful season for the Razorbacks who finished the year with a 9-2-0 overall record. Arkansas under the guidance of head coach Colby Hale has become a force in the SEC and on the national scene with a very impressive 69-27-9 over the past five seasons.

It was a total team effort and win for the Commodores but a key factor that should not be overlooked was their play on the defensive side of the ball. Credit defenders Ella Shamburger, Madiya Harriott, Myra Konte, Maya Antoine and Alex Wagner and goalkeeper Sarah Fuller along with the help of the outside midfielders who did a good job tracking back when needed to contain a very productive and pressure oriented Arkansas frontline of Anna Podogil, Parker Goins, Taylor Malham and Ava Tankersley along with midfielder Kaylor Mckeon. Also credit Commodore sophomore midfielder Kimya Raietparvar with an outstanding goal line save in the second half that prevented an Arkansas goal that may very well have changed the trajectory and the outcome of the match.

Soccer is a game of momentum. Those on hand in Orange Beach as well as those watching the contest live on the SEC network didn’t have to wait long for the action in this one to heat up. The game got off to an explosive and totally unexpected start with three goals in the first five minutes of the match.

Kaylan McKeon gave Arkansas the lead and the early momentum just 46 seconds into the match when she controlled a weak clearance and sent it into the back of the frame. Vanderbilt remained focused and reversed what could have been a very devastating early Arkansas advantage just two minutes later when senior forward Haley Hopkins, whose touch on the ball and quickness in the final third was a factor all evening, was fouled in the box. Raietparvar then calmly converted the ensuing penalty kick for the Commodores to knot the score at 1-1.

It seemed that the contest might settle down at that point but that was not to be the case in a season that has been anything but conventional.  In the fifth minute of the match Vanderbilt midfielder Leila Azari made the first of many productive moves down the right flank off the dribble to create the space she needed to send a cross into the box. Midfielder Raegan Kelley, who was on the receiving end of the cross, cleanly headed it into the back of the frame from within the box to give Vanderbilt a 2-1 lead that they never relinquished.

Both teams sought to improve their standing for the remainder of the half but neither was able to create a scoring opportunity that they could exploit. Both did a better job of maintaining possession and putting together combinations of passes when they kept the ball on the ground. The contest remained 2-1 at halftime with both sides having five shots on goal.

Arkansas came out strong to begin the second half trying to apply pressure up top that would create a situation that they could exploit. The Razorbacks looked to be settling into a rhythm in the early part of the half as they began to do a better job of putting together combinations and maintaining possession. It felt like it was just a matter of time before the pressure the Razorbacks were applying would produce a numbers advantage or turnover that would result in a situation that they could exploit.

However, Vanderbilt never lost their composure and a bend but don’t break Commodore defense did an excellent job of playing through the pressure.

The momentum shifted back to Vanderbilt when midfielder Abi Brighton controlled a clearance attempt at the top of the box, took a couple of touches to create the space and the angle she needed, and drove a rocket just under the top of the bar into the back of the frame in the 54th to give the Commodores a 3-1 advantage. That concluded the scoring for the evening.

Arkansas continued to have to chase the game and toward the end of the match a degree of leg and perhaps mental weariness slowed the pace of the contest.

It was a hard fought and physical contest between two very deserving college soccer teams that brought down the curtain on a surreal season played under conditions that no one could have imagined this time last year.

It is the norm to see teams rush the field and celebrate after winning a conference championship but there was something special, unique, and perhaps even hopeful for the future in Vanderbilt’s celebration. It was a group celebration that exemplified the joy, the pride, the team spirit and yes the resilience of a close knit group that pulled together to overcome the adversity of a season that began with a 1-3-0 record and a ton of uncertainty to win the SEC championship.