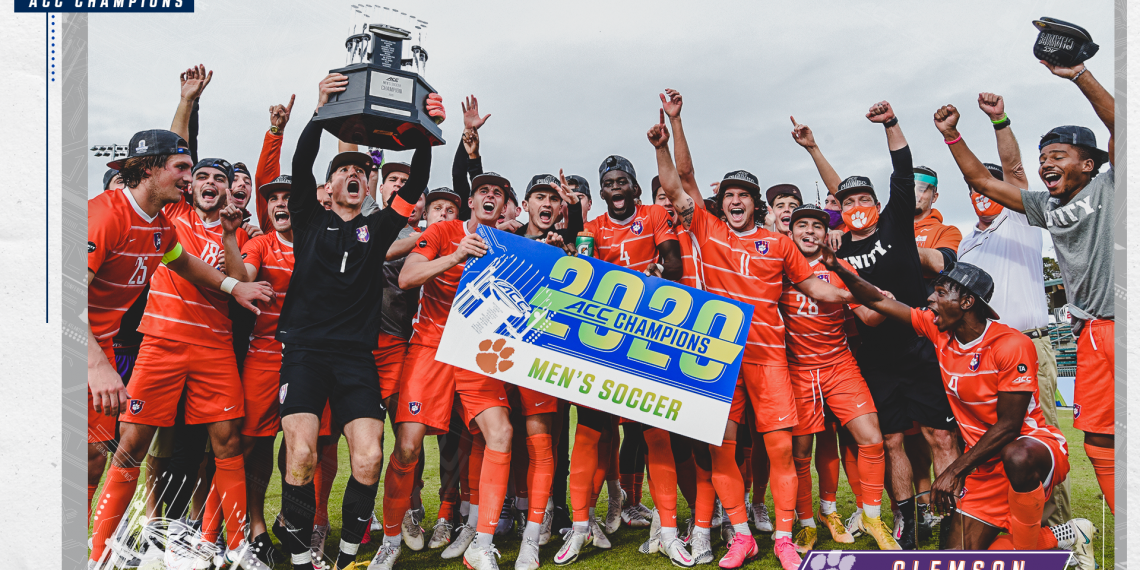 There was a lot to like about the Atlantic Coast Conference Tournament final that matched the number one ranked Pittsburgh Panthers with the number two ranked Clemson Tigers.

You could not have picked a better day for the 2020 men’s ACC championship contest. The sky was clear with the temperature in the low 70’s when the match got underway Sunday at WakeMed Soccer Park in Cary, North Carolina.

Soccer is a game of opportunity. At the end of the day, Clemson did a better job than Pittsburgh of creating and capitalizing on the opportunities that came their way. The result was a 2-1 Clemson win and the program’s fourth ACC Championship and their second under head coach Mike Noonan.

The loss was the first of the fall season for a very talented Pitt team under head coach Jay Vidovich that made its first ever appearance in the ACC Championship contest.

It was an up tempo match with one and two touch soccer the norm. More when it came to touches on the ball was not better for the most part with the exception of the opportunities that existed at times to push the ball forward into open space at speed down the flanks.

Clemson set the tone right out of the gate and dominated possession in the attacking third during the first half of play. The Tigers were consistently able to push players forward to gain a numbers advantage,  did a good job of movement off the ball, attacking down the side, and changing the point of attack.

As a result the Pitt defense lacked the desired compactness and it created seams that the Tigers were able to attack. In addition, Clemson’s effectiveness in getting numbers forward hampered Pitt’s ability to get into a rhythm on the offensive side of the ball because players frequently had to drop back to assist on the defensive side of the ball. While Pitt was able to generate a few good runs into space down the flank in the first half there often was not a target player in position to receive a cross. It was also clear that the Panthers missed the services and experience of starting back Jasper Loeffelsend who was unable to play due to injury.

The Tigers got on the board in the 13th minute of play when Seye made a quick run into open space in the box that created the angle he needed to slot a into the net from about six yards out after receiving a pass from midfielder Callum Johnson. Pitt found themselves in the unfamiliar position of having to play from behind for the first time in the 2020 fall season.

The Tigers continued to control the pace and get the best of the run of play throughout the first half with a nine to three advantage in shots and a six to three edge in corner kicks. However, the first half ended with Clemson holding a slim one goal advantage and the outcome of the contest very much in doubt.

Pitt came out on the front foot in the second half and quickly altered the complexion of the match when Noel was on the receiving end of a long pass from junior midfielder Jackson Walti which he deposited in the goal from about six yards out to knot the score at 1-1 and give Pitt new life. The goal was Noel’s second of the tournament and the sixth consecutive contest in which he scored.

Pitt did a much better job of movement off the ball in the second half and the target players who were often not where they needed to be to receive a cross in the first half began to do a better job of making the necessary runs. Pitt also did a better job of compacting and organizing their defense in part because Barber moved from the flank to a more central position which appeared to limit the very effective runs and crosses down the side that had created seams in the Panther defense.

Clemson’s execution in the second half was not as sharp as it was in the first half but the momentum shifted back their way in the 71st minute of the match with a play that began with sophomore Philip Mayaka sending a ball down the left side that Barber ran onto and then sent a cross into the box that Brighton decisively headed into the goal to give Clemson a 2-1 advantage. The goal was Brighton’s tenth of his career.

Pitt continued to try to press the attack but the Clemson defense held strong and the Panther shots were few and far between from that point forward.

Clemson closed out the fall season with an 8-2-1 record. Pitt took another step forward with the growth of the program and concluded their season with a 7-1-0 record.

As it stands now the NCAA Tournament has been moved from fall 2020 to after the spring 2021 season. Clemson by virtue of winning the ACC Tournament has secured the conference’s automatic berth into the tournament. Pitt as well as several other ACC teams would appear to in the driver’s seat for an at-large berth based on the body of their work in the 2020 fall season.

The NCAA previously announced that plans for the tournament which is slated to get underway on April 30, 2021 include a reduction in the number of teams in the field from 48 to 36 teams. There are still unknowns depending on how many conferences that did not play in the fall end up playing in the spring. Potentially 24 of the 36 slots would go to conference winners reducing the total of at-large berths to 12.

All that will sort itself out at a future date. In the meantime the ACC wraps up a very challenging but successful fall season.