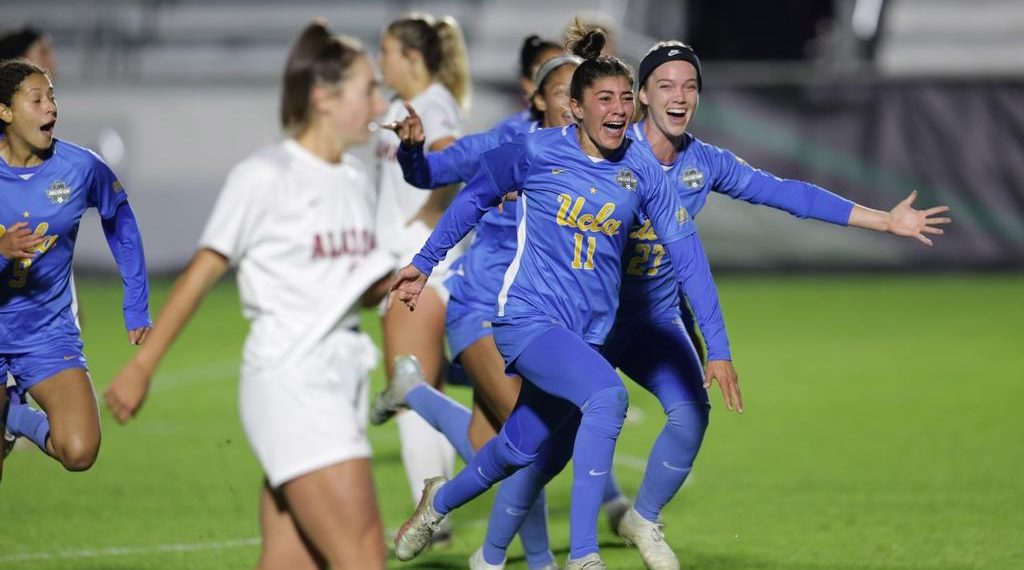 This one featured several drastic shifts in momentum.

North Carolina got on the board in the closing minutes of the first half when freshman forward Maddie Dahlien played a ball into the box that resulted in a missed clearance that opened the door for senior forward and team captain Aleigh Gambone to drive a shot into the top right corner of the net from around six yards out.

The Tar Heels went into intermission holding a 1-0 lead despite the fact that Florida State maintained possession for 59% of the time with a seven to four advantage in shots and a huge seven to one advantage in corner kicks. It appeared at the time that the Seminoles would begin to finish their opportunities and take control in the second stanza. However, it was the Tar Heels who came out on the front foot in the second half and totally dominated play in the first twenty minutes of play.

A handball in the box off a left footed blast from redshirt freshman forward Ally Sentnor resulted in a North Carolina penalty kick in the 59th minute of play that defender Tori Hansen decisively sent into the top left corner of the net to give UNC a 2-0 advantage. Senior defender Julia Dorsey made it 3-0 UNC in the 66th minute when she placed a header into right side of the net from within the box out of a free kick served in by senior forward Emily Moxley.

When the third goal was scored it looked like the point in the game where a North Carolina team that played lock down defense in their Elite Eight win over Notre Dame would maintain total control of the contest with FSU having to take risks that would make their vulnerable. It brought to mind that this one might be a repeat of FSU’s totally uncharacteristic 4-0 loss to Notre Dame during regular season play.

Instead two things happened that resulted in a totally unexpected shift in momentum back to FSU. Fatigue may have been a factor but for whatever reason the Tar Heels unexpectedly, as they did several times during the season, appeared to lose focus and stopped doing the things that had been working so well for them. The Tar Heels no longer put together the combinations of passes and got away from the spacing that had enabled them to dominate the second half of play up to that point.

In addition, FSU forward Jody Brown took the Seminoles on her back in an apparent effort to will her team back into the game. Brown jump started her team infusing a renewed sense of direction and energy into the Seminoles. Florida State midfielder Onyi Echegini drove a header into the net that was set up by a nice move down the right side of the pitch and cross from Brown to narrow the gap to 3-1 in the 67th minute of play.

In the 76th minute FSU defender Heather Payne scored with an assist from Echegini to close to gap to 3-2. Florida State had momentum and perhaps had the game lasted ten minutes longer they would have tied it but it was too little too late and a North Carolina team that had been up 3-0 survived a scare from the Noles and held on for the win.

Redshirt freshman Emmie Allen had a solid nine save evening in goal for North Carolina. FSU netminder Christina Roque had three saves for Florida State. FSU had a 25 to 14 advantage in shots and an eleven to six advantage in shots on goal along with a 13 to 3 edge in corner kicks.

It was a disappointing loss for a Florida State team under first year head coach Brian Pensky that had it sights set on another national championship but nonetheless it was another banner season for the Seminoles who conclude the 2022 season with 17-3-3 record after winning the ACC regular season and tournament titles and advancing to the College Cup.

It was a big win for the Tar Heels who lost to FSU 2-1 in the ACC Tournament final. The Carolina faithful were eager for a positive outcome after enduring unexpected back-to-back losses by the football team and three losses in a row by the previously number one ranked basketball team.

North Carolina under the guidance of legendary head coach Anson Dorrance improves to 20-4-1 and advances to face UCLA on Monday with the 2022 National Championship on the line. The Tar Heels sustained a 2-1 loss to the Bruins in Chapel Hill back on September 4.

There was a lot of excitement around this one with the main storyline centering around how well an Alabama team out of the SEC that won its first ever NCAA Tournament game last year would fare in their first ever appearance in the College Cup against a UCLA team out of the Pac-12 that has a storied tradition.

UCLA pressed from the get-go but solid play in goal by Alabama netminder McKinley Crone in the early going kept the Bruins off the board.

It looked like the Tide might surge to an early lead when forward Riley Mattingly Parker converted a diving header served in by midfielder Felicia Knox in the 26th minute of play but the goal was disallowed due to an offsides call. Had the goal stood it would have given Alabama the early momentum but it didn’t so we will never know if it would have made a substantive difference in the outcome. Instead three minutes later it was the Bruins who broke the ice when defender Quincy McMahon made a nice move off the dribble down the left side utilizing her speed and touch on the ball to send a cross through a very narrow seam into the box that forward Reilyn Turner tapped into the goal.

Both teams attacked with UCLA getting the best of possession for the remainder of the half and the score remained 1-0 at halftime.

UCLA came out on the front foot in the second half with McMahon again coming up big for the Bruins when she cut off the dribble from left to right and drove a shot into the back of the frame from the top of the penalty area in the 52nd minute to extend UCLA’s lead to 2-0.

Two minutes later graduate student midfielder Madelyn Desiano pushed forward and then surgically cut back across the middle to create the space and the angle she needed to rifle a left-footer into the left corner from just outside the box to make it 3-0.

The Bruins did a good job throughout the game of playing through the pressure that Alabama sought to place them under that has been a key ingredient in the success the Tide has had this year. UCLA consistently created the triangles and spacing they needed and utilized their touch on the ball to maintain possession and to switch the point of attack as the opportunity arose to find seams in space that they could exploit.

The Bruins also did a good job of maintaining the marking and support they needed on the defensive side of the ball to keep a potent Alabama attack powered by Mattingly Parker, Knox, Ashley Serepca, Gianna Paul and Riley Turner that averaged 2.81 goals per game from getting into gear. Graduate Student Lauren Brzykcy was rock solid in goal for the Bruins with a seven save evening behind a Bruin backline that included Lilly Reale, Jayden Perry and Quincy McMahon. Alabama netminder McKinley Crone had some impressive stops and concluded the game with eight saves.

The Tide closes out a history making season under head coach Wes Hart that will forever raise the bar of excellence for an Alabama team that had an impressive 23-3-1 record with a 10-0-0 mark in regular season SEC play. Hart summed things up well when he stated, “To come this close and and come up short of a national championship hurts, but when it finally wears off, I hope our players will look back at this season and be able to see how incredible it was.”

UCLA under first year head coach Margueritte Aozasa did a great job of maintaining their composure and executing their game plan. The Bruins out of the Pac-12 improve to 22-2-1 and advance to the the College Cup final on Monday for the sixth time in program history where they will face North Carolina out of the Atlantic Coast Conference at 6 pm EST.