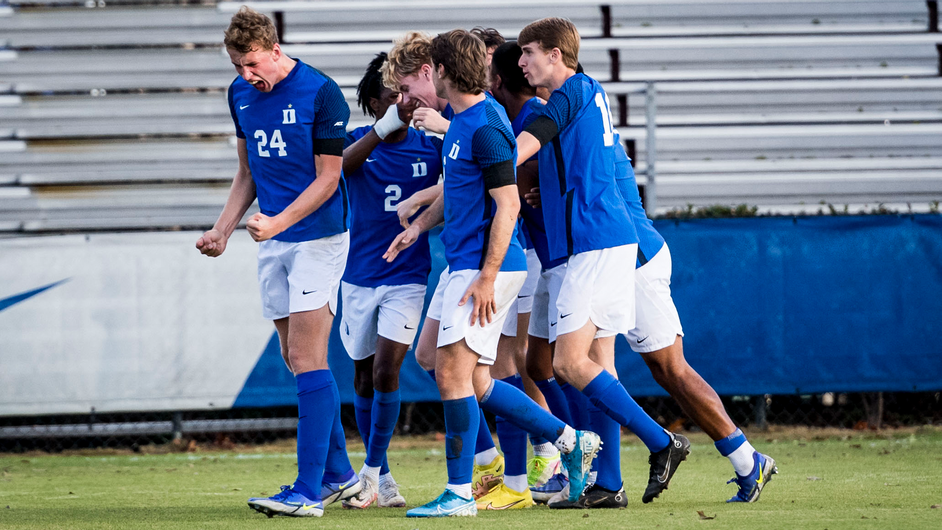 The Road To The College Cup Continues ON Saturday with Portland At Pittsburgh, Indiana At UNCG, Vermont At Syracuse And Creighton At Duke.

Portland (15-2-3) advances to the Elite Eight for the first time since 1995. Who would have thought that the Pilots out of the West Coast Conference, and not Washington, Stanford or Oregon State out of the Pac-12, would be the lone team from the west coast in the Elite Eight. That’s not meant to discount what this Portland team has accomplished because they deserve a spot in the Elite Eight but who would have predicted that Washington would be eliminated at home by Creighton, that Stanford would lose at home to UNCG, and that Portland would top Oregon State 2-0 in Corvallis.

The Pilots have utilized a high-octane attack led by midfielder Brandon Cambridge (12g, 7a) and forwards Jacob Babalai (8g, 4a) and CJ Tibbling (7g ,2a) and solid play by a defense anchored in goal by George Tasouris and defenders Delentz Pierre, Kevin Bonilla and Nicholas Denley to record what is arguably their best season since 1995.

A win in the Elite Eight would be another step forward for Portland under head coach Nick Carlin-Voight but they face the tough challenge of traveling cross country to face a Pitt team out of the ACC that is tough to top at home.

Pitt is among the teams that entered the 2022 season with a lot of key gaps do fill due to departures.  The ability of several returning players to assume greater responsibility and the addition of several experienced transfers helped Pitt to avoid a drop off in the level of their play. This is Pitts fourth consecutive NCAA Tournament berth and the third year in a row that they have advanced to the Elite Eight.

The Panthers advanced to the Elite Eight by upsetting overall number one seed Kentucky 2-1 in Lexington. Pitt had to come from a goal down to top the Wildcats. The composure the Panthers exhibited in securing a come from behind win on the road in a big game like that reflects the development of the winning mentality and focus that has evolved at Pitt under Jay Vidovich.

Forward Bertin Jacquesson (8g, 4a) and midfielders Valentin Noel (10g, 3a) and Filip Mirkovic (3g, 12a) are among the keys on the offensive side of the ball for Pitt. Midfielder Jackson Walti (2g, 0a) is the catalyst and the guy that will set the pace for the Panthers.

Much will hinge on the ability of a Pitt defense anchored in back by sophomore Mateo Maillefaud, graduate student Yanis Leerman and freshman Jackson Gilman along with senior goalkeeper Joe van der Sar to contain a potent Portland attack.

Indiana has been a hard team to get a handle on this year with an up and down season of sorts. The Hoosiers earned the program’s 28th appearance in the Elite Eight via 1-0 wins at home over unseeded but highly regarded Saint Louis and Marshall.

UNCG is making its first appearance in the Elite Eight. The Spartans under head coach Chris Rich punched their ticket to the Elite Eight by advancing past Ohio State at home and Stanford on the road in penalty kicks after both contests were tied 1-1 at the end of 110 minutes of play.

The win over number five seed Stanford gave the number 12 seed Spartans instead of number 13 seed Indiana the right to host the Elite Eight. UNCG is an impressive 9-0-2 at home this year. Three of Indiana’s four losses and three of their six ties have come when playing on the road.

Tradition rich Indiana has the edge over UNCG from an historical “been there before” perspective but that edge was dimensioned by the fact that the match is taking place in Greensboro and not Bloomington. However, it remains to be seen how UNCG will handle the pressure that goes with playing in a contest in which a berth to the coveted College Cup is on the line.

Both teams have capable finishers. Ryan Wittenbrink (9g, 9a), Tommy Mihalic (6g, 2a), Hervert Endeley (3g, 5a) and Samuel Sarver (3g, 3a) and assist leader Nyk Sessock (0g, 7a) add punch to IU’s attack.  Wittenbrink with five game-winning goals has been the main man in Indiana’s attack and will no doubt play a key role in the Hoosiers offensive productivity.

UNCG is an attack-oriented team powered in large part by forwards Marco Afonso (8g, 8a) and Ismail El Harchi (10g, 3a) and playmaking midfielder JC Ngando (4g, 14a). The Spartans will seek to find a weakness in a Hoosier defense that has allowed a total of 27 goals.

Indiana has had trouble at times this year closing out games and finishing opportunities as reflected in their four ties in Big Ten regular season play. UNCG has scored a total of five or more goals six times but with the exception of a 2-1 win on the road over Clemson their attack has not been as prolific against the more competitive opponents.

There are a lot of storylines to this one but chances are pretty good that it will come down to which team is able to find the appropriate balance that will enable them to apply pressure without leaving themselves vulnerable. UNCG is the more likely of the two to press the attack from the get-go but the potential exists for this one to fall into the chess match category with both teams carefully probing to try to find a weakness that they can exploit.

This is a rematch of an early season contest during which Syracuse and Vermont played to a 1-1 draw in Burlington.

Vermont looked to be in good position to secure one of the top 16 seeds before closing out the season with a 1-2-1 record that included a solid 2-1 win over New Hampshire and unexpected losses to UMBC 2-1 and Albany 1-0. The effort looked to be there but a case could be made at the time that the Catamounts had lapsed into playing to the level of competitiveness of their opponent.

Fortunately, they got back on track in the NCAA Tournament with a narrow 3-2 win in overtime against a Quinnipiac team that they lost to 2-0 early in the season, an impressive 3-2 win on the road over SMU and a 3-0 win at home over UCLA.

This is a balanced Vermont team that averages 2.14 goals per game while allowing an average of only 0.67 goals per game. Midfielder Alex Nagy (9g, 9a) and forwards Max Murray (10g, 5a) and Yaniv Bazini (5g, 3a) are the go-to guys on the offensive side of the ball for the Catamounts while goalkeeper Nathan Silveria and backs Noah Egan, Zach Barrett and Garrett Lillie are among the key elements in what can be a very tenacious Vermont defense.

Syracuse has had a banner season and is right at the top of the list of teams who have greatly exceeded preseason expectations. The Orange won the ACC Tournament Title advancing past North Carolina, Virginia and Clemson. Credit Syracuse head coach Ian McIntyre for doing an excellent job of blending together the individual talent of his players into a unified team.

Forwards Levonte Johnson (9g, 6a), who has six game-winning goals, and Nathan Opoku (9g, 5a) with three game-winners are part of a very balanced Syracuse attack. Look for Johnson and Opoku to be a factor in every contest but don’t be surprised if someone like midfielders Jerogio Kocevski (5g, 3a) or Giona Leibold (5g, 2a) who has three game-winners comes up with the big play the Orange need to survive and advance.

A stout Syracuse defense anchored in goal by Russell Shealy (0.61 goals against average) and backs Abdi Salim, Noah Singelmann, Christian Curti, Olu Oyegunie, and Buster Sjobert among others has been hard to break down having allowed a total of only 13 goals against a very competitive slate of opponents.

This margin in this one is likely to be a single goal with a 1-0 win not out of the question.

The success that Syracuse has enjoyed this year has been due in large part to the fact that they don’t make a lot of mistakes and have been very effective in finding a way to prevail in the close ones.

Give the Orange the edge due to playing at home but this one could easily go either way and will require a total team effort for 90 minutes from whoever prevails. Breakdowns on the defensive side of the ball will be hazardous.

Ok raise your hand if you thought number six seed Creighton would top Xavier, Seton Hall and Georgetown to win the Big East Tournament. Maybe a hand or two from Omaha went up. Now raise your hand again if you thought unseeded Creighton after advancing past Missouri State 2-1 in Omaha would beat number one seed Washington 3-1 in Seattle and number 15 Tulsa 2-1 in Tulsa to advance to the Elite Eight to face Duke in Durham, North Carolina.

Road warriors. There is no other way to describe this Creighton team. The “never say never” Bluejays under former Creighton All-American Johnny Torres have displayed the grit and determination as well as the composure that has enabled them to come from behind to win in each of their three NCAA Tournament wins.

This is a deep Creighton team with an attack powered by forward Duncan McGuire (21, 3a), the Big East Offensive Player of the Year, that has produced a total of 60 goals.

Both Creighton and Duke have very productive and deep midfields so much will hinge on which team is able to dominate the run of play, switch the point of attack to create space that can be exploited, and get the ball to the feet of their goal scorers in the attacking third. It also will be interesting to see if Creighton can get their attack in gear against a Duke defense that has allowed a total of only eight goals on the season.

Duke is the favorite but it would be foolish to count Creighton out after what they have accomplished down the home stretch.

Duke played their way into the Elite Eight for the first time since 2006 by advancing past Denver 3-1 and FIU 1-0. The Blue Devils will look to a very competitive group of midfielders that include Shakur Mohammed (10g, 2a), Nick Pariano (1g, 7a), Peter Stroud (2g, 5a) and Ruben Mesalles (1g, 5a) for offensive productivity.

Duke under former Blue Devil All-American John Kerr boasts a solid team-oriented defense anchored in goal by Eliot Hamill and backs Amir Daley, Kamran Acito, Axel Gudbjornsson and Antino Lopez that will be tasked with containing what has been a potent Creighton offense.

Defense wins championships so give Duke the advantage going into this one. However, Creighton is playing with house money at this point with an unexpected run to the Elite Eight which makes them a dangerous opponent.

Should Creighton get on the board first the momentum could shift their way. Creighton has established that they can come from behind to win but if Duke with a defense that has only allowed a total of eight goals can hit the ground running and jump out to an early lead as they did in their first-round win over Denver they will be hard to top. The Blue Devils are not the type of team that you want to have to chase from behind.  Regardless, Duke will have to put in a full 90 minutes of play on both sides of the ball or risk becoming Creighton’s next victim.