Women’s College Soccer – Fifteen Midfielders Who Will Make Their Presence Known In The 2020/2021 NCAA Tournament. 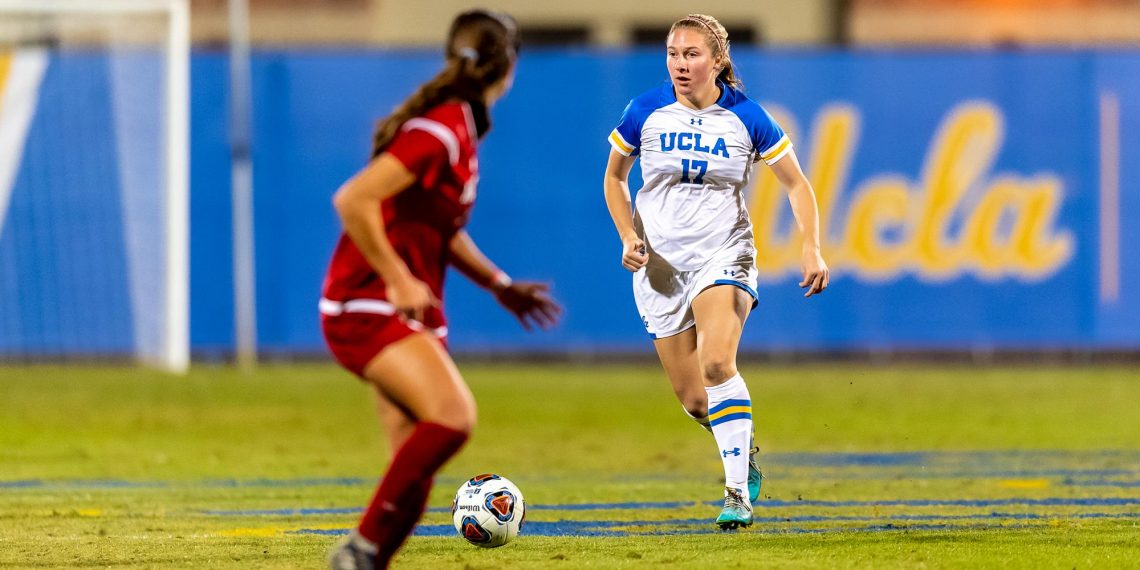 It’s Crunch Time For These Players And Their Teams. 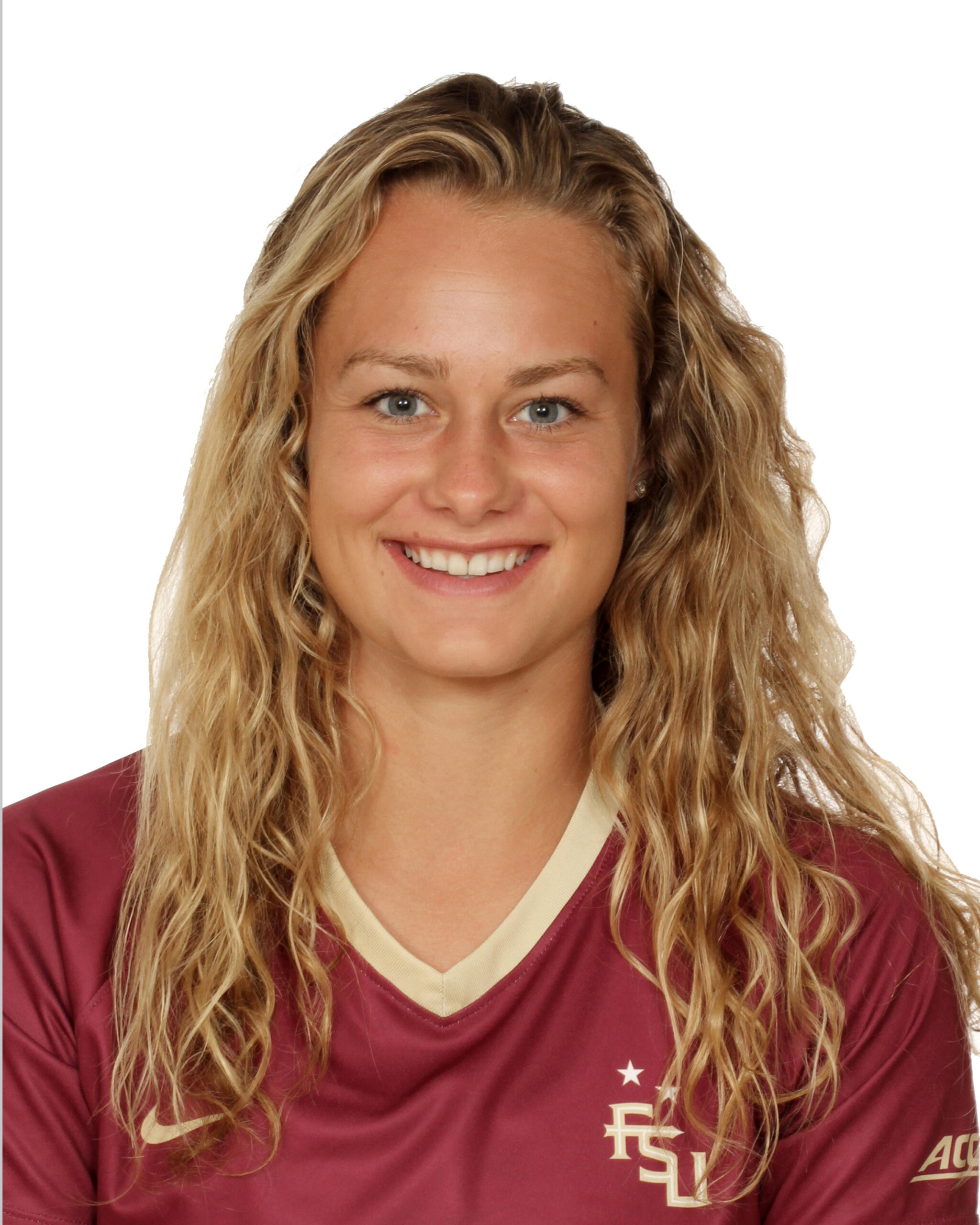 Jaelin Howell – Junior – Midfielder – Lone Tree, Colorado – Florida State – The FSU holding midfielder is a catalyst on both sides of the ball for the number one seeded Seminoles. Howell (4g, 2a) has been a starter since arriving on campus in 2018 and is among the many reasons why FSU has had so much success during her tenure in Tallahassee. Look for Howell, the 2020 ACC Midfielder of the Year, to be a factor in how far the Noles advance in the NCAA Tournament. Florida State is coming off a 11-0-0 fall 2020 season during which a very balanced attack produced a total of 34 goals while a rock-solid defense anchored by freshman goalkeeper Cristina Roque held an extremely competitive slate of opponents to a total of only six goals.  FSU did not play any official contests during the spring which creates the potential for a little rust heading into the one and done environment of the NCAA Tournament. 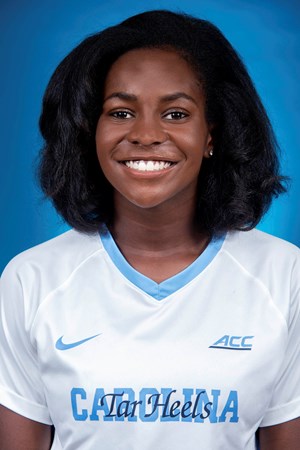 Brianna Pinto – Junior – Midfielder – Durham, North Carolina – North Carolina – Pinto’s (13g, 5a) speed, touch on the ball, vision and quickness creates matchup problems for opponents. She is a three-year starter and box-to-box midfielder with the ability to take over a contest. Pinto has contributed four game-winners in the combined fall 2020 and spring 2021 seasons for a potent UNC offense that has found the back of the net 44 times while a tenacious defense has held opponents to a total of only six goals. The number two seeded Tar Heels enter the NCAA Tournament with a 15-1-0 overall record. The only blemish on their record is a 3-2 loss to FSU in the 2020 ACC Tournament final. UNC would like nothing better than to have an opportunity in the NCAA Tournament to avenge that loss. 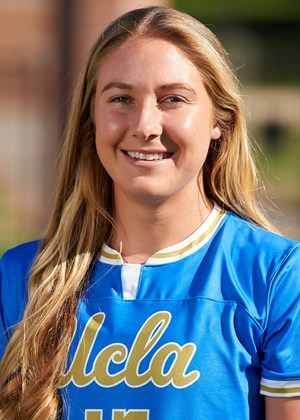 Delanie Sheehan – Senior – Midfielder – UCLA – Brentwood, California – UCLA – Sheehan (4g, 5a) adds stability on both sides of the ball for the Bruins. She is a hardworking, battle tested, team leader who will set the pace for UCLA in the middle of the park. Sheehan, who was recently named the Pac-12 Midfielder of the Year, is the type of player a coach wants on the pitch during the pressure packed survive and advance environment that accompanies the NCAA Tournament. UCLA enters the Tournament with a 12-1-2 overall record that includes a loss to Arizona State and two ties with USC. The Pac-12 champion Bruins are very capable of making a deep run in the tournament. 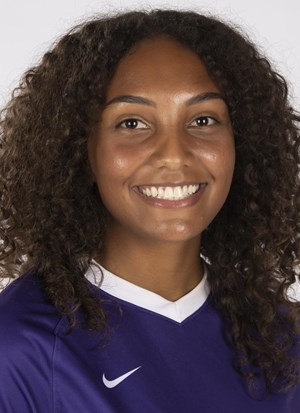 Yazmeen Ryan – Senior – Midfielder – Norman, Oklahoma – TCU – Ryan (7g, 3a) is a four-year starter and playmaker for the Horned Frogs who will enter the NCAA Tournament with a formidable 11-1-1 overall record that includes an 8-0-1 mark in Big 12 play during the fall 2020 season. TCU’s lone loss was a 1-0 setback to Texas A and M in College Station in their next to the last contest during the spring 2021 season. Ryan along with sophomore forward Grace Collins (6g, 2a) power a Horned Frog attack that has netted a total of 23 goals while a TCU defense anchored by junior back Brandi Peterson and netminder Emily Alvarado has allowed a total of only five goals. TCU enters the NCAA Tournament for the fifth consecutive season but for the first time ever with the advantage that accompanies being awarded the number four seed in the field of 48 teams. 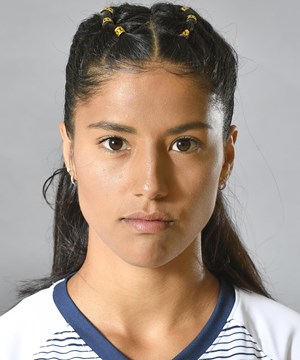 Stefany Ferrer-Vanginkel – Senior – Midfielder – Barcelona, Spain – West Virginia – Ferrer-Vanginkel (6g, 3a) joins junior forward Alina Stahl (6g, 2a) as the top goal scorers for a West Virginia team that enters the NCAA Tournament with a 10-2-1 overall record. The impact that she has had on the Mountaineers productivity is reflected in the fact that she has netted a total of four game-winners in the combined 2020 fall and 2021 seasons. Ferrer-Vanginkel adds the creativity, determination and experience to the Mountaineers that should bode well for their ability to make a run in the NCAA Tourney. There is a lot to like about the talent and competitive spirt of Ferrer-Vanginkel and her West Virginia teammates under the direction of head coach Nikki Izzo-Brown. 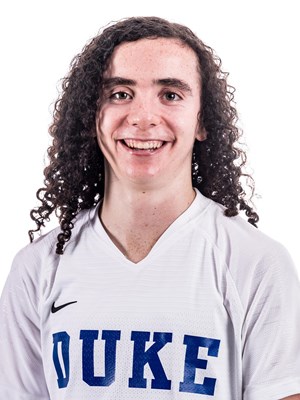 Sophie Jones – Sophomore – Midfielder – Menlo Park, California – Duke – Jones (2g, 3a) is a stalwart in the midfield for Duke. She is a creative athlete who simply put makes good things happen. Jones has all the ingredients needed to create havoc for opposing teams. She is a soccer savvy player with great touch on the ball and a work ethic that adds to the athletic ability that she brings to the pitch. What she brings to the pitch is not always reflected in the stats but nonetheless she is a difference maker. The number nine seeded Blue Devils out of the ACC enter the NCAA Tournament with a 10-5-3 overall record and will face the winner of the Arizona State and Siena contest in the second round. 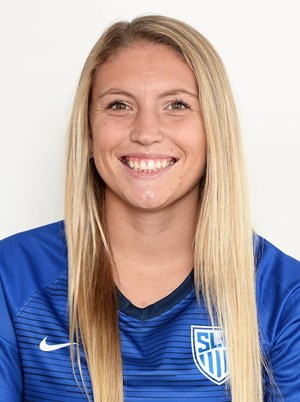 Hannah Friedrich – Junior – Midfielder – St. Louis, Missouri – Saint Louis – Friedrich (4g, 14a) has been an impact player at Saint Louis since arriving on campus as a freshman in 2018. She is a playmaker and the catalyst up top for a Billiken team that will enter the NCAA Tournament with a 15-1-0 overall record and perfect 8-0-0 mark in A-10 Conference play. Friedrich, who was named the A-10 Offensive Player of the Year, joins midfielders Abbie Miller (8g, 4a) and Hannah Larson (8g, 1a) and forward Emily Groark (7g, 2a) to power a multi-dimensional and very explosive Saint Louis attack. The Billikens have scored a total of 40 goals to date while a solid defense anchored by freshman goalkeeper Emily Puricelli has allowed a total on only 9 goals. The number 15 seeded Billikens who have a ten-game winning streak will face the winner of the Liberty and Washington contest in the second round of the tournament. 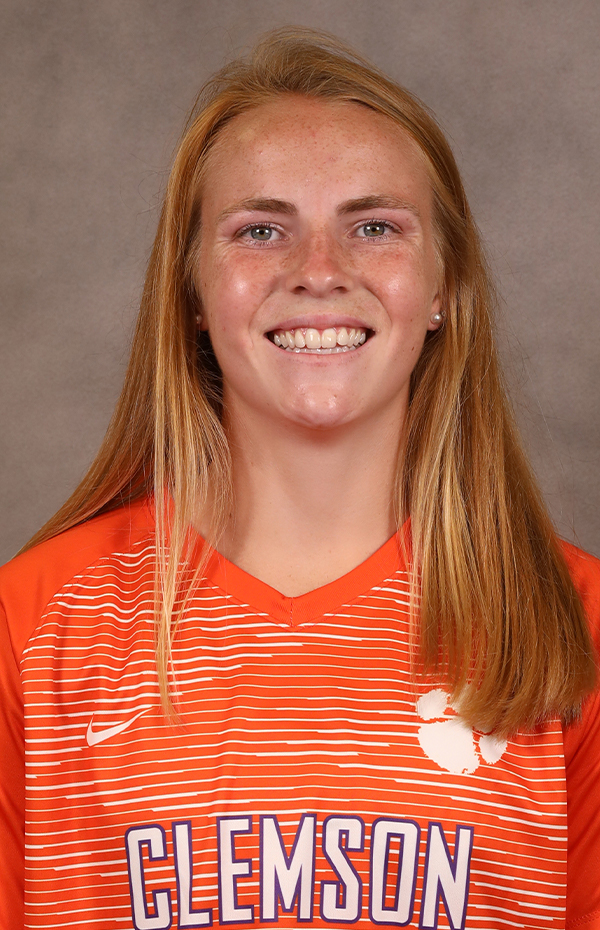 Megan Bornkamp – Freshman – Midfielder – Mooresville, North Carolina – Clemson – Bornkamp hit the ground running in her rookie season for the Tigers playing and starting ten contests in the fall 2020 season and six contests in the spring 2021 campaign. She is Clemson’s leading scorer with eight goals and one assist to date, Bornkamp, along with forwards Caroline Conti (7g, 3a) and Maliah Morris (5g, 4a) among others, is a key part of a Tiger offense that has scored 31 goals to date. Bornkamp is a pure athlete and determined competitor who will no doubt continue to make an impact during the NCAA Tournament. Look for Bornkamp to make her presence known when number 14 seeded Clemson tangles with the winner of the Rutgers and Southeastern Louisiana contest in the second round. Clemson enters the NCAA Tournament with a 12-4-0 overall record that includes a 5-3-0 mark in the very competitive ACC Conference. 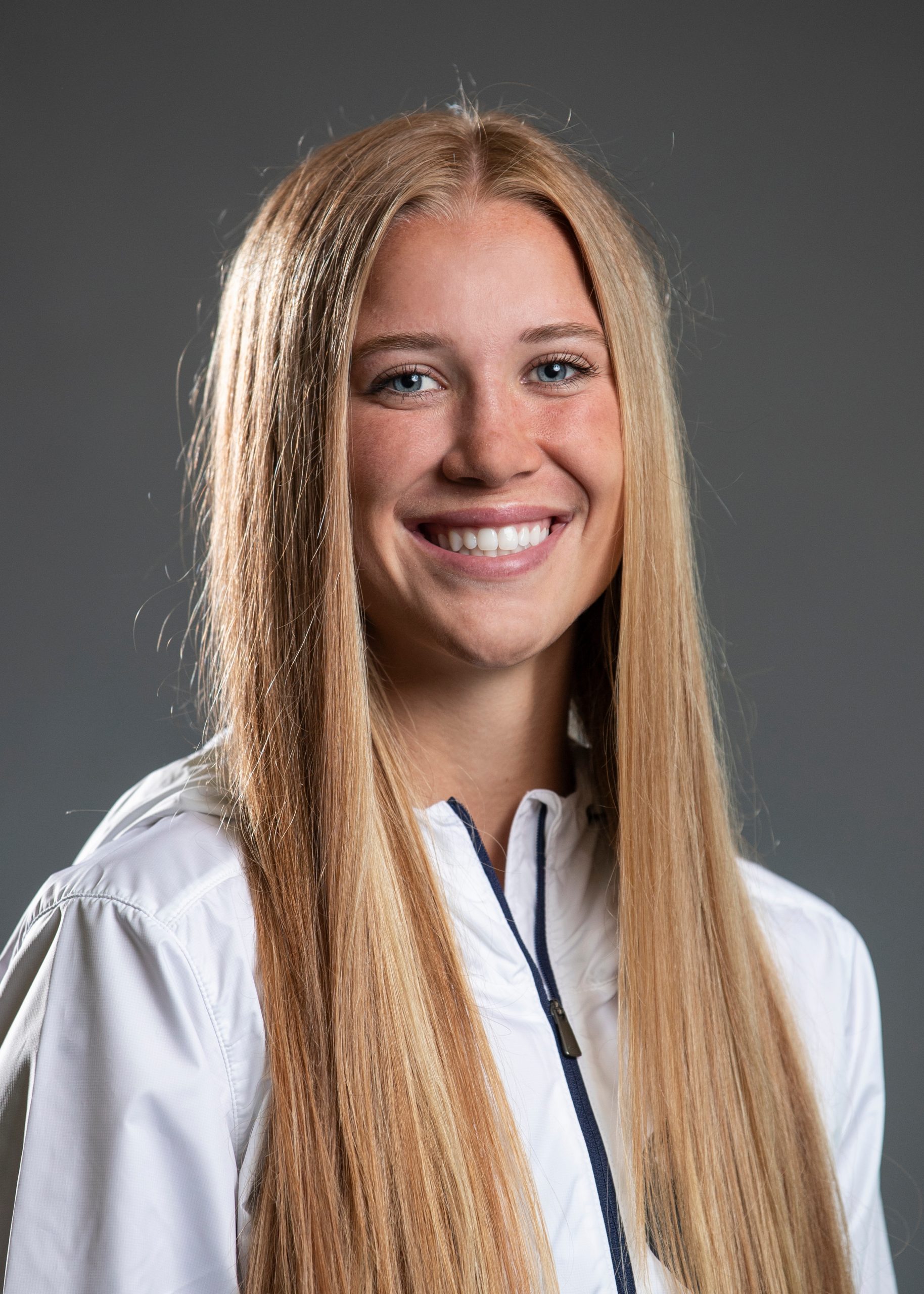 Mikayla Colohan – Senior – Midfielder – Kaysville, Utah – BYU – Colohan (11g, 5a) who has 35 career goals is an impact goal scorer whether playing up top or in the midfield. The two-time WCC Offensive Player of the Year is a prime timer with the ability to score in multiples. Colohan along with Cougar teammates Rachel McCarthy (9g, 7a), Cameron Tucker (8g, 8a) and Bella Folino (8g, 2a) give BYU an explosive offense that has produced a total of 47 goals while holding a very competitive slate of opponents to a total of seventeen goals. If Colohan and her teammates settle into a rhythm on the offensive side of the ball they are very capable of making a deep run in the NCAA Tournament. The number twelve seeded Cougars will face the winner of the Virginia and SIUE contest in what looks to be one of the more challenging second round matchups. 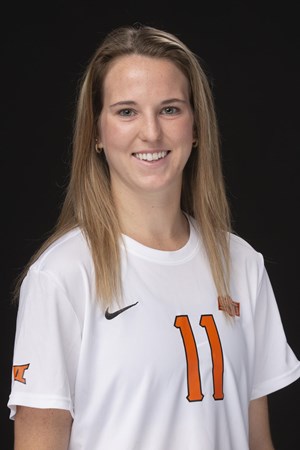 Grace Yochum – Junior – Midfielder – Houston, Texas – Oklahoma State – Yochum (10g, 2a) and sophomore midfielder Olyvia Dowell (10g, 4a) combine to give the Cowgirls an explosive double-barreled attack. Yochum is a pure goal scorer with big play ability. She is an experienced force in the middle of the park for a very good Oklahoma State team that is 12-3-1 and making back-to-back appearances in the NCAA Tournament. Number ten seeded OSU under the direction of head coach Colin Carmichael will have their work cut out for them when they face the winner of the Colorado and South Alabama game in the second round.

Izzy D’Aquila – Sophomore – Midfielder – Mission Viejo, California – Santa Clara – D’Aquila (5g, 1a), a WCC First Team selection, came to Santa Clara as a highly regarded freshman in 2019 and has not disappointed. She is an opportunistic goal scorer with all the skills needed to present matchup problems for opposing defenders. D’Aquila combines with senior forwards Kelsey Turnbow (6g, 7a) and Julie Doyle (1g, 2a) and freshman forward Sally Menti (1g, 4a) to power a Bronco attack that has produced an average of 2.71 goals per game during the spring season.   The number eleven seeded Broncos enter the NCAA Tournament with a 7-1-0 overall record and will tangle with the winner of the Ohio State and Stony Brook match in the second round. 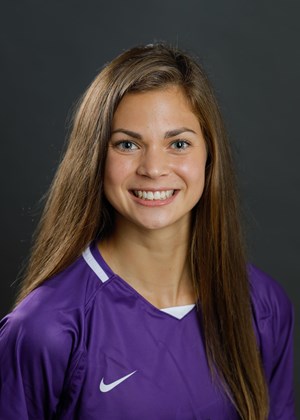 Isabella Gutierrez – Junior – Midfielder – Statesboro, Georgia – Furman – Gutierrez (4g, 3a) has been a starter, key contributor, and difference maker for Furman since arriving on campus in 2018. Gutierrez was named the Southern Conference Women’s Soccer Player of the Year after leading the Paladins to a banner unbeaten 8-0-2 season and Southern Conference championship. Furman returns to the NCAA Tournament field for the first time since 2015. The Paladins will face a very competitive Rice team out of CUSA that is 12-2-1 in what should be a very competitive first round matchup. Gutierrez will play a key role in whether or not Furman can find a way to break the code on a tenacious Rice defense that has not allowed a goal in their last eight contests 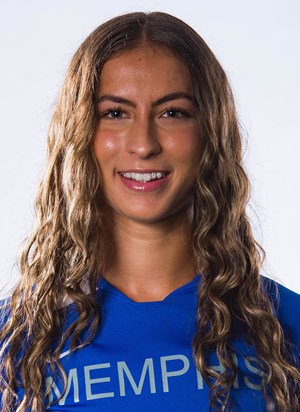 Mya Jones – Sophomore – Midfielder – Calgary, Alberta – Memphis – Jones (1g, 4a) is a solid presence and pace setter in the midfield for the Tigers. She was named the CAA Midfielder of the Year for a Memphis team that was upset by Cincinnati 1-0 in the semifinals of the American Athletic Conference tournament. The Tigers were subsequently awarded an at-large berth into the NCAA Tournament based on a productive 8-3-0 overall record. Jones and her Memphis teammates will seek to get back in the win column when they face Utah Valley in the first round of the NCAA Tournament. 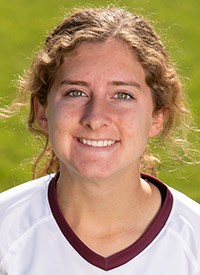 Avery Adams – Senior – Midfielder – Highlands Ranch, Colorado – Montana – As a holding midfielder and as an outside back Adams (3g, 2a) is a key contributor on both sides of the ball for Montana. She is a pace setter with a work ethic that is second to none. Adams is an experienced two-time All-Big Sky First Team selection and stable presence for the Grizzlies no matter where she is on the pitch. Montana enters the NCAA Tournament with a 9-1-0 overall record. Adams and her teammates will have to bring their A game if they hope to prevail in a first round match against a very good South Carolina team that is making its eighth consecutive appearance in the NCAA Tourney. 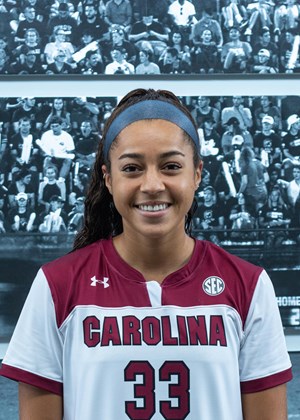 Jyllissa Harris – Junior – Midfielder – Hazlet, New Jersey – South Carolina – Harris (4g, 2a) is a three-year starter who has made an impact on both sides of the ball for the Gamecocks. Whether as a midfielder or as a back she will factor into the level of success that South Carolina has in the NCAA Tournament. Harris is a competitor pure and simple who adds both talent and grit to a Gamecock team that will enter the tourney with a 10-4-0 overall record. South Carolina will face Montana out of the Big Sky Conference in the first round of the 2020/2021 NCAA Tournament.