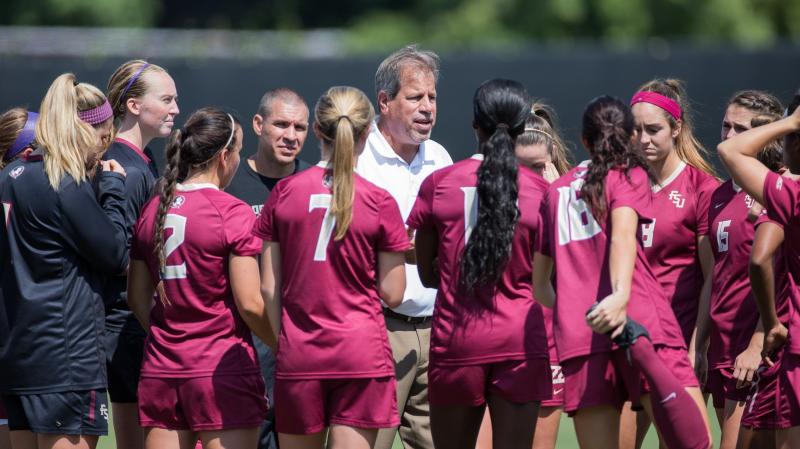 EYE OF THE TIGER

Clemson (7-0-1) will be looking to remain at the top of the standings in the ultra-tough Atlantic Coast Conference when the Tigers travel to the Sunshine State this week for matches at Number 3 Florida State (7-1-1) on Thursday and Miami on Sunday.

The Tigers jumped four spots to No. 7 in the latest NSCAA Division I Top 25 after outlasting then-number 10 Notre Dame last weekend. Junior Claire Wagner, who is averaging 1.17 points per game, garnered ACC Offensive Player of the Week honors after netting the game-winning goal in overtime to hand the Irish their first loss of the season.

The win — the Tigers’ second against a top 10 opponent this season — helped Clemson soar to the top spot in the first RPI rankings released by the NCAA this week.

But the Tigers will have their hands full Thursday. Florida State is riding a 12-game unbeaten streak against ACC foes, including last Sunday’s 0-0 tie against Duke. The Seminoles are 18-0-2 in their last 20 matches against ACC teams. Plus, FSU has posted a 12-0-3 mark against Clemson since 2002.

Clemson, which is averaging 1.88 goals per game, will have to make sure it gets on the board early and often against the Seminoles. FSU’s stingy defense has reeled off four consecutive shutouts and has not allowed a goal in its last 448:37 of game time, dating back to Sept. 4 against Texas A&M.

GOPHERS ON THE MOVE

Minnesota vaulted to the No. 18 spot in the latest Top 25 on the merits of a stellar opening weekend against formidable Big Ten opponents Ohio State and Penn State. The Gophers, who went 2-0 on the road last weekend, were previously unranked and are on top of the league standings for the first time since 2008, when they won the conference title.

Junior Simone Kolander netted both game-winning goals on the weekend, earning Big Ten Offensive Player of the Week honors. She has four game-winners on the season. On the defensive side, goalkeeper Tarah Hobbs anchors a defense that doesn’t allow many goals — the Gophers boast a 0.381 goals against average, which ranks seventh nationally.

Minnesota (7-1-2) hosts Purdue on Friday, followed by home match against Indiana on Sunday. The Gophers only loss of the season was at LSU Aug. 30.

No. 4 Texas A&M will face its third top 20 opponent on the road in the last four weeks when the Aggies visit No. 17 South Carolina Thursday to battle for first place in the Southeastern Conference standings. The game will air live on SEC Network.

Both teams, along with fellow conference member Kentucky, have started with league play with a 2-0-0 record. Texas A&M has already matched its best 10-game start in school history with a 9-1-0 mark. The Aggies best start came in 1996 when the team began 15-1-0.

Led by Haley Pounds’ seven goals, the Aggies are the only squad in the SEC that has five or more players that have scored three or more goals. Texas A&M ranks 17th in the nation with a 2.60 scoring average.

RUTGERS IS ‘KNIGHTS OUT’

No. 11 Rutgers is off to an 8-0-0 start for the first time in program history and was ranked No. 2 in the NCAA’s first RPI of the season (the highest in program history). The Scarlet Knights are the lone remaining unbeaten and untied team in the nation, and along with Cornell, are just one of two teams in the nation that has not allowed a goal. The Knights look to keep the momentum when they host Illinois for a league tilt on Thursday.

Is California the team to beat in the Pac-12 this year? Perennial power Stanford lost to Santa Clara last weekend (and Penn State the weekend before). UCLA is an uncharacteristic 4-4-0. Cal is currently the highest ranked Pac-12 and enters league play on an eight-game unbeaten streak in which they have outscored foes 16-3. Sophomore goalkeeper Emily Boyd has posted four consecutive shutouts and earned Pac-12 Goalkeeper of the Week honors for her efforts. She is currently riding a career-best shutout streak of 432:22. The No. 14 Bears visit Colorado on Sunday to open Pac-12 play.

In his ninth season Texas Tech head coach Tom Stone picked up his 100th career victory with the Red Raiders with a double-overtime win against South Florida last weekend. Stone has built No. 15 Texas Tech (6-1-2) into one of the nation's best programs but prior to Stone's arrival in Lubbock, the program owned a dismal 24-104-3 record. The team had never appeared in the NCAA postseason. Since taking the helm of the program, Texas Tech has advanced to the NCAA postseason three times and has played in eight Big 12 tournaments. The Red Raiders open Big 12 play at Oklahoma on Friday.

Long Beach State is looking to break into the Top 25 as the 49ers host No. 6 BYU for a Saturday night showdown. BYU is the third ranked team, and second top 10 opponent, Long Beach will face in non-conference action. The 49ers have already knocked off then-No. 4 UCLA and then-No. 21 this season. Long Beach has posted six shutouts and allowed just five goals in 10 games. LBSU ranked 17th in the nation with 0.458 goals against average. Interestingly, the 49ers have played six overtime games this year — and we are only midway through the season.