What’s On Tap This Weekend – College Soccer Coast To Coast 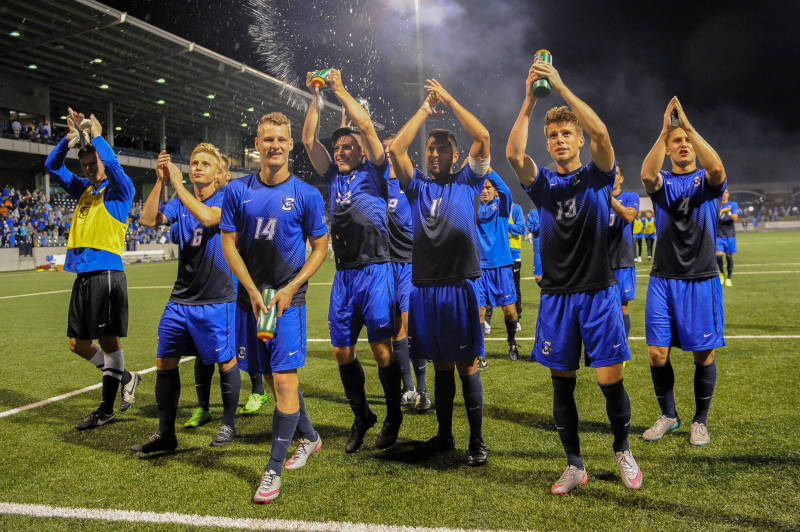 The intensity level is picking up with a lot of high profile conference contests scheduled to take place this weekend as well as several very interesting non-conference matchups at college campuses across the country.

Creighton (7-0-0)  vs. Seton Hall (0-5-1) – On paper the Bluejays should dominate this one.  Creighton has been impressive on both sides of the ball to date and Seton Hall has not yet won a game but this is just the second time this year that Creighton has had to venture out of the friendly confines of Morrison Stadium so you never can tell.

Duke (4-2-1) vs. North Carolina (6-0-1) – The Tar Heels come into this one after impressive ACC conference wins on the road against Virginia Tech 2-0 and at home over Notre Dame 4-2.  Duke began the year with a 4-0-1 record which was their best start since the 2006 season before losing to non-conference foe UNCW 3-0 at home and ACC foe Clemson 2-1 on the road.  There are no easy contests in ACC play.  Add in the fact that this is a rivalry match and you get a contest that is worthy of a spot on the potential upset list.

Virginia (5-0-2) vs. Notre Dame (5-2-1) – Notre Dame had a difficult week last week losing 1-0 at home to Xavier and 4-2 to North Carolina in Chapel Hill.  They responded by thumping Michigan State 4-2 on Tuesday in East Lansing.  Virginia traveled  to South Bend last year and upset the Irish in the third round of the NCAA Tournament to end Notre Dame's season earlier than many expected.  George Gelnovatch and his Virginia team will be seeking a repeat but Bobby Clark should have the Irish focused and ready for a little payback.

Akron (4-2-1) vs. UC Santa Barbara (4-2-1) – Akron has wins on the road over Georgetown 1-0 and  Maryland 3-2 and a come from behind 3-2 win at home over Saint Louis 3-2.  However, the Zips were topped at home by Wake Forest  2-1 on Tuesday night.  Akron has a difficult venue to play in and a tough team to face in UC Santa Barbara as they seek to get back in the win column.  The jury's still out on just how good the Gauchos are but they will enter the contest off a momentum and confidence building victory over UCLA 4-2 in Los Angeles in which junior forward NIck DePuy (6g, 1a) scored twice.

Clemson (6-1-1) at Wake Forest (7-1-0) – The Tigers travel to Winston-Salem to face the Demon Deacons in what shapes up to be one of the marquee college soccer games of the weekend.  Both teams need a win in this one for standing in the ACC and on the national scene.  Clemson is 1-1 in ACC play with a 1-0 loss to Notre Dame in South Bend and a 2-1 win over Duke at home.  Oliver Shannon (4g, 1a), T.J. Casner (4g, 0a) and Austen Burnikel (3g, 2a) lead the Tigers in goals scored to date. Andrew Tarbell has a 0.74 goals against average between the pipes for Clemson. Wake Forest is 2-0-0 in ACC play with a win over Pittsburgh on the road and a 3-1 win over Syracuse at home.  The Demon Deacons under the direction of first year head coach Bobby Muuss are coming off a very impressive 2-1 win on the road over Akron. Senior forward  Michael Gamble (6g, 1a) powers the Wake Forest attack.

Maryland (3-2-3) at Wisconsin (2-5-0)- The Terps travel to Madison to face the Badgers on Sunday. Maryland is 0-0-2 in Big Ten play with 0-0 ties with Michigan State and Michigan.  The Terps's have been rock solid on the defensive side of the ball but average in terms of offensive firepower.  Freshman forward Sebastian Elney (3g, 1a) and freshman midfielder Amar Sejdic (2g, 0a) are among the newcomers who have the ability to contribute to the offense.  Senior midfielder Mael Corboz (1g, 4a) is the key to the Terp attack.  Wisconsin has also struggled in terms of offensive productivity with a total of only six goals to date but this is a team that will likely improve and win their share of contests as the season progresses.  The Terps should prevail but If Wisconsin can keep it close they have a shot of winning it.

Portland (2-4-1) vs. Washington (4-0-2) – Washington faces Seattle (5-2-0) on Thursday night and will host Portland on Sunday.  Washington has recorded four shutouts so far this year but has been inconsistent at times in terms of offensive productivity. The Huskies will need to put together a full ninety minutes of play on both sides of the ball to prevail in both of these contests. Portland upset Oregon State and could do the same to the Huskies if they look past them.

Seattle (5-2-0) vs. Oregon State (5-2-0) – After beginning the season with five consecutive wins and rocketing upward in the polls the Beavers looked a little leg weary in loses to Portland 1-0 and Gonzaga 2-1.  They will seek to get back on track and in the win column when they return home to Paul Lorenz Field to tangle with a good Seattle team on Sunday.

Denver (6-0-1) vs. Western Illinois (5-0-1) – Denver travels to face Western Illinois on Saturday in a Summit League contest.  Something has to give in this one.  Denver under the direction of first year head coach Jamie Franks is among the Cinderella teams to date in the 2015 season.  Western Michigan under the direction of third-year head coach Chad Wiseman began the season with five consecutive wins before sustaining a 1-1 tie with Dayton and losing 2-0 to Valparaiso.  Denver comes into this one with a recent win over Saint Louis 1-0 on the road and Utah Valley 2-1 at home.  Denver has played a much more competitive slate of opponents than Western Illinois but this one could go either way.

Elon  (7-1-0) vs. Delaware (3-4-1)- Elon's seven game win streak was halted Tuesday when they were upset by South Carolina 3-1 in Columbia.  The Phoenix will hit the road again to face Delaware on Saturday in a Colonial Athletic Association contest.  Delaware comes into the game on a three game losing streak with losses to Iona 3-0, Columbia 1-0, and Virginia Tech 4-1.  The big question in this one is whether or not Delaware can contain a multi-dimensional Elon offense.  Delaware lead by Guillermo Delgado (4g, 1a) is a much better team than their record indicates so this one has the potential to be very interesting.

UAB (3-5-0) vs. Old Dominion (4-1-1) – UAB travels to face ODU on Friday in a Colonial Athletic Association matchup. Old Dominion has shown the ability to score in multiples when they get going. They have outscored their opponents fifteen to six year to date.  UAB has been up and down so far this year and will arrive in Norfolk off losses to South Carolina 1-0 and Coastal Carolina 3-1. If both teams play to their potential ODU should prevail.

New Mexico (5-1-1) vs. South Carolina (4-2-1) – The Lobos travel to Columbia to tangle with South Carolina on Friday. New Mexico is among the hottest teams in the country right now having won five straight including resume building wins over UCSB, LMU, and American.  Chris Wehan (6g, 0a) and Niko Hansen (2g, 1a) power the New Mexico attack and may prove too much for the Gamecock defense to contain. Sophomore goalkeeper Jason Beaulieu and redshirt junior Nicholas Rochowski are part of a bend but don't break Lobo defense that has only allowed six goals to date.  This is a young New Mexico team that will be facing an also young South Carolina team.  The Gamecocks, who will have the home field advantage, are beginning to gel as a team as reflected in recent wins over UAB and Elon. This one warrants a spot on the upset watch list.

Providence (4-2-1) vs. Georgetown (4-2-2) – Georgetown will host Providence on Saturday in this Big East Conference contest. The Hoyas started slowly but now things seem to be falling into place as expected and as reflected in recent wins over West Virginia 3-1 on the road and Maryland 2-1 on Wednesday at home.   Alex Muyl  (4g, 3a), Brandon Allen (3g, 4a), Arun Basuljevic (3g, 2a) and Brett Campbell (2g, 1a) power a multi-dimensional Georgetown attack.  Providence is lead by Mac Steeves (7g, 0a) who is always dangerous and capable of taking over a contest. Steeves and his Providence teammates should keep it close in the early going but look for Georgetown to pull away in the second stanza.

Xavier (6-2-0) vs. DePaul (1-6-0) – Xavier travels to Chicago to tangle with DePaul in a Big East game.  The Musketeers had a subpar weekend of play in the early going in which they lost to Lipscomb 2-1 and Virginia Tech 3-1.  However they subsequently rebounded with four consecutive wins including a signature victory over Notre Dame in South Bend.  DePaul can be a tough place to play but unless Xavier is not focused they should depart the "Windy City" with a win.

Central Arkansas (1-6-0) vs. Saint Louis (3-2-0) – Saint Louis will host Central Arkansas out of the Missouri Valley Conference on Saturday night. It has been somewhat difficult to get a handle on just how competitive Saint Louis is this year.  They squandered a  two goal lead to lose to Akron 3-2 on the road, they followed that up with an impressive 3-2 win over Louisville on the road in overtime, and then were topped 1-0 by Denver at home.  Central Arkansas will come to Hermann Stadium with upset on their minds but this one should be all Saint Louis.

Connecticut (3-1-3) vs. South Florida (5-2-0) – Connecticut will travel to face South Florida on Saturday in Tampa in what shapes up to be an important American Athletic Conference contest. Connecticut enters the contest seeking to rebound from a 3-1 loss to Boston College on Tuesday. South Florida appears to be gaining momentum with three straight wins since back to back loses to Notre Dame and Indiana. Whoever scores first will have a big edge in this contest.

Temple (7-0-1) vs. Cincinnati (4-3-0) – Temple travels to play Cincinnati on Saturday in this American Athletic Conference match. The Owls led by Jorge Gomez Sanchez (7g, 2a) are off to their best start since the 1985 season.

UCLA (2-4-0) vs.VCU (2-5-1) and UC Irvine (1-4-2) – The Bruins will host VCU on Friday and UC Irvine (1-4-2) on Sunday. None of these teams are having the type season that they expected to have but that is particularly the case for UCLA. The season is young and all three teams still have a chance to reverse things and get back on track before they get into conference play. Look for this weekend to be a turning point for one of these teams.