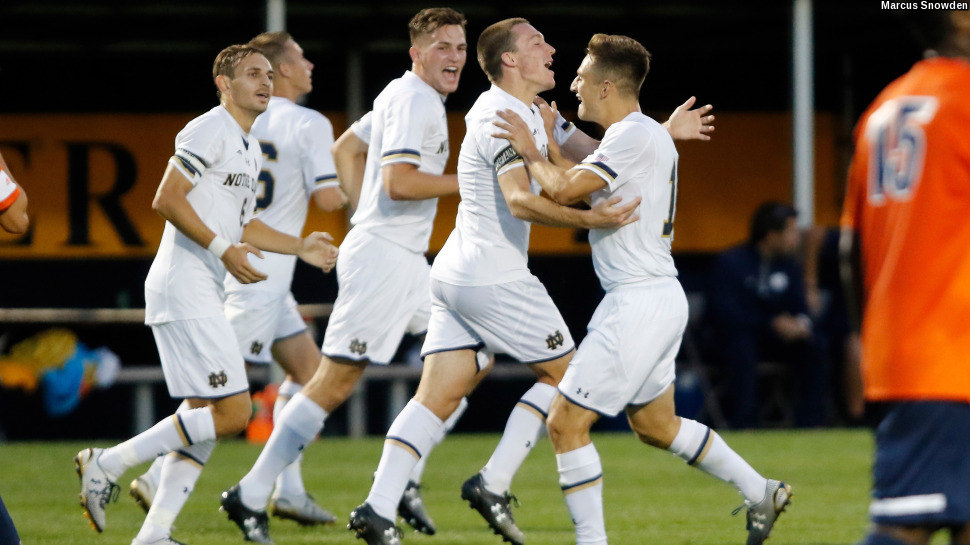 Notre Dame 3 – Virginia 1 – The Cavaliers traveled to South Bend and sustained their first loss of the 2015 season.  Junior Mark Gormley sloted a shot into the right side of the net in the 36th minute after a nice combination of passes from teammates Oliver Harris and Patrick Hodan. The Irish went into intermission with a 1-0 advantage.  In the 71st minute the Cavaliers were presented with a red card and had to play with ten the remainder of the match. In the 78th minute Evan Panken scored from eight yards out after receiving a pass from Jeffrey Farina out of a throw-in to give Notre Dame a 2-0 lead. Virginia's Todd Wharton converted a penalty kick in the 79th minute to narrow the gap to 2-1. Connor Klekota scored after receiving a cross from Farina in the 81st minute to seal a big ACC Conference win for Notre Dame.  The Irish improve to 6-2-1 and Virginia drop to 5-1-2.

Coastal Carolina 4 – Gardner-Webb 0 – The Chanticleers came out strong with Bryce Follensbee netting two goals in a twenty-one second span in the third minute of the game to give Coastal Carolina a 2-0 advantage.  The game remained 2-0 at half-time.  Einar Einarsson scored for the Chanticleers out of a free kick from twenty-one yards out in the 49th minute to make it 3-0. Sophomore Darius Stambler from Midland, Texas who transferred in from Lubbock Christian made a nice move off the dribble in the box after receiving a pass from teammate Ryan Willoughby in the 80th minute of play to conclude the scoring.  Coastal improves to 6-0-1 with a 1-0-0 mark in Big South play.  Gardner-Webb drops to 1-7-0 with a 0-1-0 mark in conference play.  The Chanticleers have a tough challenge coming up next Wednesday when they host N.C. State.

Akron 2 – UC Santa Barbara 0 – Akron rebounded from a 2-1 loss to Wake Forest on Tuesday to record a very good road win over UCSB before a crowd of 7,238 at Harder Stadium in Santa Barbara.  Redshirt sophomore forward Sam Gainford controlled a rebound of his own shot to net the first Akron goal in the 35th minute.  Stuart Holthusen came off the bench and took advantage of a turnover in the 87th minute of play to add the insurance goal for the Zips who improve to 5-2-1.  UCSB is now 4-3-1.  Jake Fenlason had one save in goal to notch the shutout for Akron.  Freshman Justin Vom Steeg had seven saves in goal in a losing cause for the Gauchos.

Seattle 2 – Washington 1 (Thursday) – Seattle secured a win over the Huskies for the first time since moving to the Division I level.  The Redhawks showed a lot of mettle and confidence when they came out strong  pressing the attack and putting pressure on Washington.  It paid off when David Olsen scored for Seattle in the 28th minute of play off a textbook give and go with teammate midfielder Sergio Rivas.  Washington tied the game at 1-1 in the 29th minute when Ian Lange converted a penalty kick.  Forward Hamza Haddadi scored what proved to be the game-winning goal for Seattle out of a corner kick with an assist from Julio Rubio in the 47th minute of play.  Seattle secures a resume and bragging rights win to improve to 6-2-0.  Washington playing without several starters drops to 4-1-2.

Old Dominion 3 – UAB 1 – This CUSA contest was played under windy and wet conditions.  ODU scored three times in the first half of play with freshman midfielder Niko Klosterhalfen netting the first in the 7th minute of the match after alertly controlling and redirecting a rebound into the lower right corner of the frame.  ODU midfielder Jesse Miralrio scored in the 20th minute when he gained possession of a loose ball and slotted it into the back of the net from six yards out. Miralrio made it 3-0 ODU in the 35th minute when he scored out of a corner kick served in by Klosterhalfen.  Ian Svantesson drove a shot into the lower left corner of the goal from twenty-five yards out in the 81st minute to score UAB's lone goal of the evening.  ODU improves to 5-1-1 and UAB drops to 3-6-0.

South Carolina 2 – New Mexico 1 (ot) – "The Graveyard" was the scene of one of the more exciting contests played under the lights Friday night.  South Carolina drew first blood in this CUSA contest when Kevin Walker scored from cross range after receiving a cross from Koty Millard.  Chris Wehan gave New Mexico new life when he converted a penalty kick in the 86th minute to knot the score at 1-1 and send it into extra time. Senior forward Jeffrey Torda came up big for South Carolina when his shot from eighteen yards out found its way just inside the far post to bring the crowd on hand at Stone Stadium to their feet and give the young Gamecocks an impressive and gritty win over a very good and also young New Mexico team.  South Carolina secures another resume building win to improve to 5-2-1. New Mexico is now 5-2-1.

Santa Clara 2 – California 1 – The Broncos secured a much needed confidence building victory when they upset the Golden Bears 2-1 in a come from behind win at Stevens Stadium in Santa Clara.  It looked like this one was going to go as expected when midfielder Aravind Sivakumar scored for California in the 7th minute after Nick Lima made a nice move and pass to set up the goal.  However that was not to be the case as Santa Clara got back into it in the 25th minute of the match when senior midfielder Dyaln Autran placed a shot into the bottom left corner of the goal out of an indirect free kick from the top of the penalty box with an assist from Brennan Castro.  Sophomore forward Carlos Delgadillo netted the game-winning goal and sealed the upset when he gathered a loose ball and calmly placed it into the lower corner of the net in the 84th minute of play.  Santa Clara improves to 4-5-0 year to date while California drops to 5-2-0.

Michigan State 3 – Rutgers 1 – The Spartans bounced back from a 4-0 thumping at the feet of Notre Dame on Tuesday night to get back in the win column and improve to 4-3-1 in this Big Ten contest. Freshman forward Ryan Sierakowski got things going for Michigan State when he placed a rebound of a missed shot into the goal in the 4th minute of the contest. Ken Krolicki scored what proved to be the game-winning goal in the 7th minute of play from the center of the box after receiving a well played cross from Sierakowski.  Rutgers exhibited new life when Miles Hackett scored from within the box after receiving a cross from JP Correa to close the gap to 2-1 in the 14th minute of play.  The teams went into intermission with Michigan State up 2-1.  Sierakowski  put the contest on ice for Michigan State when he scored from twelve yards out after receiving a cross from Krolicki. Rutgers is now 3-3-1 with a 1-2-0 mark in Big Ten action.  Michigan State will take to the road to face Bowling Green in a non-conference match on Tuesday.

Louisville 1 – N.C. State 1(ot)  – Freshman forward Tate Smith from Phoenix, Arizona placed a header into the back of the net in the 43rd minute out of a corner kick served in accurately by sophomore Kim Kubel to draw first blood for the Cardinals.  As is so often the case after a goal is scored the Wolfpack immediately responded and knotted it at 1-1 when Phillip Carmon placed a header inside the left post after receiving a cross from Simon Blotko.  That concluded the scoring for the evening in this ACC contest.  Louisville is 4-2-3 overall to date with a 0-0-3 record in conference play.  N.C. State demonstrates a lot of grit on the road to stand at 6-2-1 overall with a 1-1-1 mark in conference action.

Syracuse 5 – Pittsburgh 0 – This one was all Syracuse after Noah Rhynhart netted the first goal for the Orange in the 37th minute of play with assists from Ben Polk and Oyvind Alseth.   Polk also contributed a  hat trick in this old fashioned ACC thumping.  Julian Buescher also scored for the Orange.  Syracuse improves to 5-2-1 with a 1-1-1 mark in ACC play.  A Pittsburgh team that is more competitive  than the score of this contest would indicate drops to 4-3-1 with a 0-3-0 mark in conference play.

UCLA 2 – VCU 1 – VCU got on the board first just six minutes into the match compliments of a Dakota Barnathan goal with an assist in the form of a nice cross from teammate Jason McGlothern.   The goal seemed to serve as a wakeup call of sorts for the Bruins who tied it at 1-1 with Seyi Adekoya scoring  after making a nice move inside the box to create the space he needed to skillfully place a shot inside the left lower corner of the goal after receiving a pass from Erik Holt.  Larry Ndjock converted a penalty kick in the 56th minute to give UCLA the edge needed to secure a much needed win to improve to 3-4-0.  VCU drops to 2-6-1.

CSUN 1 – San Diego 0 – Carlos Gonzalez's header in the 66th minute that was set up by a cross from freshman defender Jumoke Hutton gave CSUN the edge they needed to secure the win.  CSUN goalkeeper  Adam Hobbs came up big for the Matadors when he stopped a San Diego penalty kick attempt in the 86th minute of the match.  It was a very good on the road win for the Matadors from the Big West Conference who secure  their third consecutive win over a team out of the West Coast Conference to improve to 4-3-1.  San Diego drops to 4-3-2.

Utah Valley 2 – Cal State Fullerton 1 (Thursday) – Diego Sanchez drove a bullet into the back of the net from around the top of the box to give Cal State Fullerton a 1-0 advantage in the 31st minute of play.  Utah Valley pressed the attack and it paid off in the 72nd minute when Alex Neff drove a header into the goal out of a corner kick followed seventy-six seconds later by a Karson Payton goal from within the box out of a free kick served in nicely by Neff to make it 2-1 UV.  The partisan crowd of 2,545 on hand at Clyde Field witnessed a gutsy performance by both teams.  Utah Valley continues to roll as they improve their record to 7-2-0.  Cal State Fullerton is 4-4-0.

UC Riverside 3 – San Jose State 0 – A good and enthusiastic crowd was present to witness the Highlanders secure a solid win over the visiting Spartans behind two goals from Michael Salazar and a single score from  Norberto Ochoa.  Ashkan Khosravi  had five saves in goal to post the shutout for the Highlanders who up their record to 4-4-1 while San Jose State drops to 2-5-0.

Bradley 1 – Loyola Chicago 0 – J.T. Kotowski converted a penalty kick with 62 ticks remaining in regulation to give Bradley the win over a game Loyola Chicago team before a crowd of 1,517 fans at Shea Stadium in the season opening Missouri Valley Conference contest for both participants.  Loyola Chicago had a 20 to 8 advantage in shots for the evening but couldn't find the back of the net.  Junior Logan Ketterer had five saves to notch the shutout in goal for the Braves. Bradley is 4-4-0.  Loyola Chicago is 3-3-2.

FGCU 2 – Brown 1 – Midfielder Miguel Jaime netted the first goal for FGCU in the 50th minute of play and Dylan Sacramento came off the pine to score what proved to be the game-winner in the 86th minute. Tariq Akeel converted a penalty kick for Brown in the 82nd minute.  Erik Hanson had five saves in goal for Brown and freshman Sawyer Jackman had a seven save evening for FGCU.  The Eagles pick up a nice on the road win to improve to 2-2-1. Brown drops to 3-3-0.