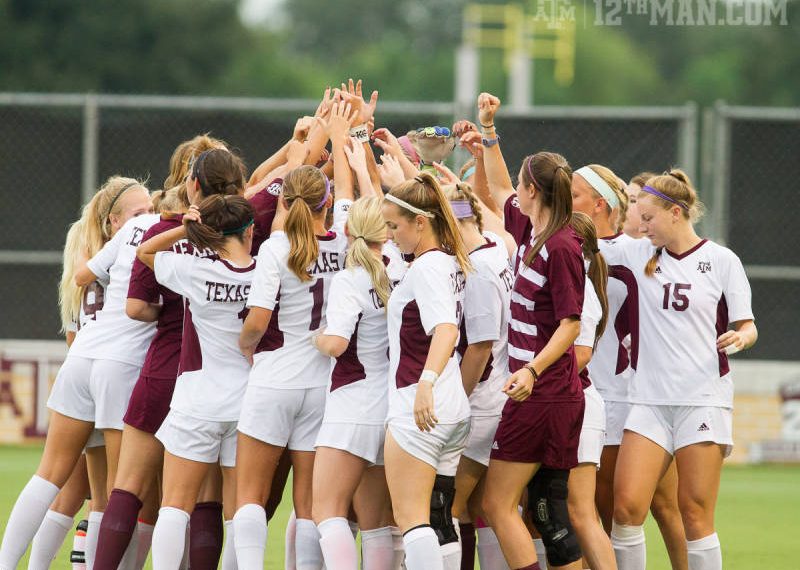 It may be early October, but this weekend’s marquee Southeastern Conference match-up will most likely have postseason implications in mid-November.

No. 6 Florida (8-2) and No. 9 Texas A&M (9-1-1) are both 3-0 in SEC play heading into Friday’s contest in College Station, Texas. This is not the first time the Gators and Aggies will be jockeying for position in the league standings.

Last year, a budding rivalry blossomed. The squads tied for the regular season championship and split their two meetings. Florida took the regular season victory, but Texas A&M bounced back two weeks later in the league tournament final as the Aggies claimed their first SEC title. The Aggies lead the all-time series 5-4, but the Gators have claimed three of the last four contests.

“We have a great long-term rivalry with Florida,” Texas A&M head coach G Guerrieri said. “I think rivalries often are born out of respect and we obviously have a great deal of respect for what they have done in this league. It should be a heck of a game and something we’re really looking forward to.”

Both teams are experienced and battle-tested. Texas A&M returned 10 starters, while Florida brought back its entire starting lineup from 2013. Both squads have played their share of tough opponents. The Aggies faced defending NCAA champion UCLA, albeit in the preseason, and Florida upended No. 2 Florida State in Tallahassee and lost a heartbreaker to then-No. 4 Stanford in overtime.

The Aggies have reeled off five consecutive victories since falling to Arizona State on Sept. 7 and lead the league with 2.64 goals per game. Shea Groom is the SEC leader with 1.0 goals per game.

“It’s a tough travel weekend,” said Florida head coach Becky Burleigh. “Texas A&M is always going to be a big challenge for us. They have a team similar to us. They’re loaded with seniors, have a lot of experience and a lot of weapons and dangerous players.”

The Gators certainly have the talent to keep up with the Aggies’ offensive pace in their third top 10 road match of the season. Sophomore Savannah Jordan ranks third in the league with 0.70 goals per game, while the UF defense boasts a 0.64 goals against average.

“We still have a lot of areas to grow and are still forming chemistry among different pairs of players and positions on our team,” said Burleigh. “I think we have a big ceiling and the games that are coming up are going to help push us there. We are really looking forward to playing great competition because that is usually what elevates us.”

AROUND THE NATION
After shutting out Virginia Tech and Wake Forest last weekend, Notre Dame sophomore goalkeeper Kaela Little looks to extend the streak when the No. 14 Irish hosts another stellar offense, No. 4 Virginia, on Friday. Little, who earned ACC Player of the Week after halting the Hokies’ 10-game winning stretch, owns the league’s second-best save percentage (.829). But Virginia’s offense will be a challenge. The Cavaliers are scoring 3.29 goals per game – seventh-best in the nation – had scored a goal in 44 consecutive matches until Florida State held them scoreless last Sunday.

With a tie against Stanford to open Pac-12 play last week, Utah (7-0-3) is off to the best start in program history. One big reason for the Utes’ solid play is goalkeeper Lindsey Luke, who has posted five shutouts on the season. She currently ranks ninth in the nation with a 90.9 save percentage, along with the 11th-best goals against average in the NCAA at 0.374. Luke and the Utes head to the City of Angels this weekend to visit No. 1 UCLA Friday. UCLA owns a 31-game unbeaten streak heading into the contest, not to mention the Bruins’ defense isn’t too shabby. They’ve shutout 12 of their last 16 opponents.

Kansas boasts the best winning percentage (.917) in the nation heading into a five-game home stretch, starting with Big 12 foe Oklahoma State on Friday. Senior goalkeeper Kaitlyn Stroud has posted league-leading 0.36 goals against average and .926 save percentage. Stroud is on pace to set school season records in goals against average, save percentage and shutouts. The Jayhawks have not allowed more than one goal in a game this season.

Washington State first-year head coach Steve Nugent has the Cougars (6-0-2) off to a fast start and on the cusp of breaking in the NSCAA Division I Top 25 (they are the first team receiving votes). The Cougars, who are unbeaten in their last nine road matches (8-0-1) dating back to last season, head to No. 12 California on Friday and No. 3 Stanford on Sunday. WSU enters the weekend riding a school-record 14-game unbeaten streak and is one of just six remaining unbeaten teams in Division I women’s soccer.

SIDEKICKS: Holy Cross is off to a stellar 9-0-2 start – the program’s most total wins since posting 10 in 2000. The Crusaders have shutout nine of 11 foes this season, three shy of the school record of 12 set by the 1999 team, and boast the second-best goals against average (.171) in the NCAA. Freshman forward Aly Spencer paces the squad offensively with a Patriot League-leading eight goals and 18 points … North Texas goalkeeper Jackie Kerestine became the program’s all-time shutout leader as she held the nation’s top scoring squad – Louisiana Tech – scoreless in a 1-0 victory last Friday. Kerestine, who also picked up a shutout over Southern Miss, has a total of 23 career shutouts, including seven this season. She earned Conference-USA Defensive Player of the Week for her efforts.

Amy Farnum Patronis covers women's Division I college soccer for College Soccer News.  She can be reached at amyfarnum@yahoo.com.