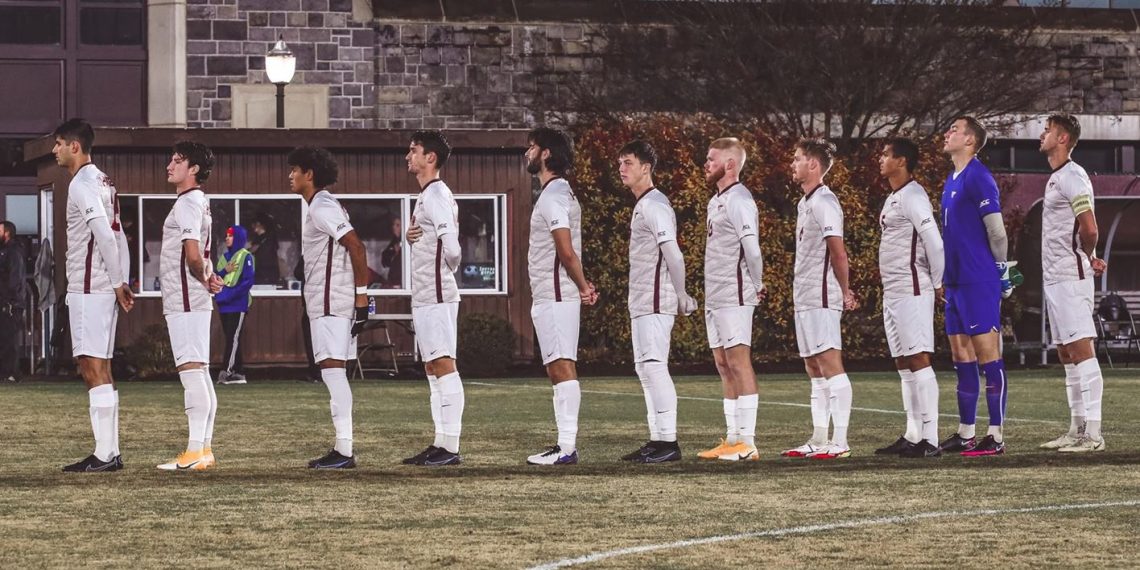 Jacob Labovitz – Forward – Three-year starter after transferring in from FDU at conclusion of his freshman season. 2021 All-ACC First Team selection. Led team in scoring in 2020 and 2021. Had 23 career goals and 9 career assists during three seasons at Virginia Tech.

Camron Lennon – Midfielder – Played in 15 games with 12 starts in 2021. Played in 72 matches with 23 starts during four seasons at Virginia Tech. Had three career goals and two career assists.

Chris Little – Midfielder – Appeared in 46 games with 15 starts during four seasons at Virginia Tech. Had one career goal and five career assists.

Nathan Durst – Defender – Played in 31 games with 20 starts during four-seasons at Virginia Tech.

The Hokies were 8-1-0 at home last year but 1-4-2 when playing on the road. Granted, it is tough to win on the road in the Atlantic Coast Conference but to move upward in the conference hierarchy Virginia Tech must hold serve at home and find a way to win a big conference game or two on the road.

Mike Brizendine stated, “We expect this group of young men to continue in the excellence that is required to be a part of our program. Their desire to not only maintain, but exceed the achievements accomplished before them gives me great hope for our team’s future.”

Senior forward Daniel Starr who appeared in ten contests during the 2021 season emerged in the spring as the the Hokies top goal scorer. Starr has the athletic ability and the potential to play a key role on the offensive side of the ball in 2022. He could combine with midfielders senior Nick Blacklock (2g, 3a), junior Conor Pugh (6g, 2a) and sophomore Danny Flores (1g, 3a) among others to replace the big play ability that Jacob Labovitz provided.

Blacklock is a playmaker with three-years of starting experience. Pugh is an opportunistic goal scorer whose work ethic contributes to his effectiveness in the attacking third. Flores, a 2021 ACC All-Freshman Team selection, is a solid box-to-box midfielder with great touch on the ball and the added advantage that accompanies having a year of starting experience under his belt.

Senior midfielder Mayola Kinyua, a starter for the last two seasons after transferring in from Appalachian State University, is a soccer savvy player who adds stability. Kinyua is the glue that holds everything together and a key ingredient in the middle of the park for the Hokies.

Sophomore forward Ethan Fraser and sophomore midfielders Declan Quill and Carter Hensley look to be among other returning players who will be in the hunt for minutes in 2022. Sophomore transfer Will Cardona who was an All-Conference selection at Winthrop in 2021 is among the members of the recruiting class who figure to be in the mix in the midfield.

Virginia Tech will miss the experience, toughness, and leadership that back and four-year starter Silvert Haugli brought to the pitch. However, a solid nucleus returns including starting defenders graduate students Cameron Joice and Kyle McDowell and ironman junior Welnilton Da Silva Jr. who played all but 22 minutes of the 2021 season. Seniors Chris Nicola and Mason McClendon, junior Jack Dearie and sophomores Jordan Black and Carsten Bay are among other returning defenders who will seek to increase their role in 2022. The recruiting class also includes several defenders who will add depth.

Sophomore Ben Martino who started 18 games in 2021 with a 1.23 goals against average and 5 shutouts returns to anchor the defense in goal. Senior Matt Zambetti who appeared in three games with two starts last year, redshirt senior Connor Jordan-Hyde and sophomore Timi Adams also return to give the Hokies a solid and deep contingent of netminders.

Virginia Tech’s current string of six consecutive NCAA Tournament berths began under the guidance of Mike Brizendine back in 2016 when the Hokies returned to the NCAA Tournament field for the first time since 2007. It is noteworthy that the success the program has enjoyed has come while playing a very challenging slate of conference and non-conference opponents.

Departures due to graduation mean that Virginia Tech will enter the 2022 season without a group of seniors who had a lot to do with the winning culture that now exists in Blacksburg. Yet, the Hokies look to be a deep team in 2022 with the ability to rotate players across the board without a drop off in performance. The current depth is due in large part to the fact that Briziendene and his staff annually do a good job of restocking the program by bringing on board talented in-state players supplemented by players from throughout the United States and several international players.

It is also a huge plus that Virginia Tech is now among the programs where the culture is annually passed down from the returning players to the newcomers. One constant under Brizendine is a team oriented focus and solid work ethic. The Hokies have displayed a lot of grit and no quit. That won’t change in 2022. The culture of the men’s soccer program is reminiscent of the lunch pail culture that existed in the football program under former long-term defensive coordinator Bud Foster.

The biggest unanswered question heading into the 2022 season looks to be offensive productivity. Much of 2022 season is likely to depend on how the offense develops. The Hokies don’t necessarily need to have a single dominant goal scorer as in the past but the bottom line is that a player or several players will have to step forward to provide big play ability and address the slack that exists.

Virginia Tech played well on the defensive side of the ball at times last year particularly down the homestretch but they were near the bottom of the ACC in terms of goals allowed. Lapses in play at times hurt them in 2021 against the top tier opponents in the ACC. Accordingly, the opportunity exists for improvement in terms of effectiveness on defense. The pieces look to be on board to make that happen.

The Hokies were 3-4-1 last year in ACC play which was good for a 5th place finish in the very competitive Coastal Division behind Duke, Pitt, Notre Dame and North Carolina. Virginia Tech upped their stock with an 8-1-3 record against non-conference opponents that included a signature win over then number one ranked Marshall.

The talent and experience is there for Virginia Tech to keep their streak of NCAA Tournament berths alive in 2022 but to do so they will once again have to maneuver through a very difficult conference and non-conference schedule.

Will Cardona – Midfielder – Fort Mill, South Carolina – Sophomore transfer from Winthrop where he was named to the Big South All-Conference and All-Tournament teams. Played with the New York Red Bulls youth organization.