What Happened At A Glance – College Soccer Coast To Coast – Friday, September 18 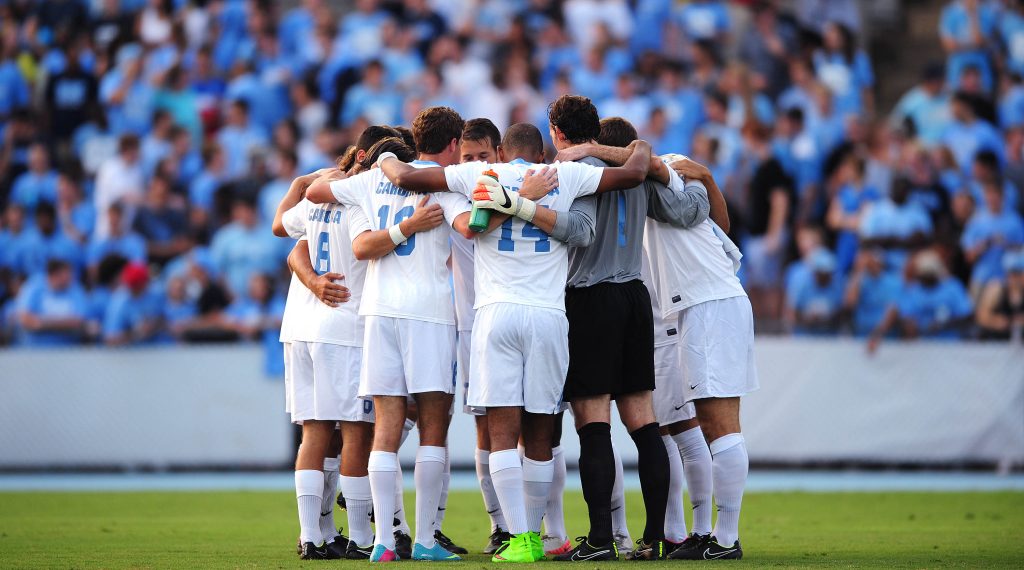 North Carolina 4 – Notre Dame 2 – The sky was Carolina blue at Fetzer Field in Chapel Hill as the Tar Heels came from behind to top highly regarded Notre Dame.  Forward Alan Winn scored twice and Colton Storm contributed a goal and an assist to lead the way.  Forward Tucker Hume's goal in the last second of the first half from eighteen yards out gave the Tar Heels a 2-1 advantage heading into halftime.

Stanford 3 – San Francisco 1 – Sophomore defender Tomas Hilliard-Acre converted two headers and Jordan Morris added the third goal for the Cardinal on a header out of a corner kick to power Stanford past the Dons.  Sophomore midfielder Corey Baird who continues to make good things happen for Stanford contributed two helpers.

Virginia 1 – N.C. State 0 – Sophomore midfielder Jake Rozhansky scored the lone goal of the game in the 35th minute of play in this ACC matchup after receiving a heel pass from Nicko Corriveau.  Jeff Caldwell had one save in goal for the Cavaliers as did Wolfpack netminder Alex McCauley.

Maryland 0 – Michigan State 0 (ot) – Defense ruled in this Big Ten contest.  Cody Niedermeier had six saves in goal for the Terps.  Zach Bennett had one save in goal for the Spartans.    The backline of both teams were impressive.

Clemson 2 – Duke 1 – Clemson improved to 5-1-1 behind the first and third goals of the contest.  Oliver Shannon netted the first Tiger goal in the 12th minute of play.   T.J. Casner scored what proved to be the game-winning goal from eight yards out in the 55th minute.   Andrew Tarbell had four stops in goal for the Tigers.  Brian White scored the lone Blue Devil goal from twelve yards out after receiving a cross from Macario Hing-Glover in the 54th minute.

Washington 3 – Dartmouth 2 – Washington flirted with a loss in this one.  It had upset written all over it when the Big Green took a 2-0 lead into intermission with Eduvie Ikoba and Eric Jayne providing the goals.  Dartmouth does not usually squander a two goal advantage.  However, Washington rallied in the second half with Quentin Pearson scoring twice off headers and James Moberg converting a penalty kick in the 76th minute to secure the victory for the Huskies.

Louisville 1 – Virginia Tech 1 (ot) – This one was tied 0-0 at halftime. The Hokies drew first blood when sophomore midfielder Merlin Baus scored out of a free kick from 28 yards out in the 54th minute.  Things looked bleak for the Cardinals when they received a red card in the 60th minute and had to play with only ten.  Shane Campbell  tied the score at 1-1 when he gathered a loose ball in the box and slotted it inside the far right post.  Theo Jamilloux has six saves in goal for Louisville. Ben Lundgaard was credited with two saves between the pipes for the visiting Huskies.

Denver 1 – Saint Louis 0 – The Pioneers hand Saint Louis a rare loss at Hermann Stadium.  The win halted the Billiken's home winning streak at fourteen.  Sophomore Cole Stevenson gave Denver the edge they needed to prevail when he scored from 10 yards out after receiving a pass from sophomore Alex Underwood.  Redshirt senior goalkeeper Dan Jackson anchored a solid defensive effort for Denver.  The Pioneers will face a tough Utah Valley team on Sunday.

Georgetown 2 – VCU 2 (ot) (Thursday) – This one went back and forth.  Alex Muyl gave the Hoyas an early 1-0 advantage.  Rafa Andrade Santos headed in a rebound in the 52nd minute to knot it at 1-1. Arun Basuljevic converted a rebound less than a minute later to give Georgetown a 2-1 lead. Dakota Barnathan scored for VCU in the 88th minute to tie the score again at 2-2 to conclude the scoring.  Both of these teams are much better than their records indicate.  Georgetown is 2-2-2. VCU is 2-4-1.

New Mexico 1 – Missouri State 0 –  The Lobos win their fourth straight contest to improve to 4-1-1. Niko Hansen netted the lone goal of the evening after receiving a cross from teammate Aaron Herrera.  It was a total team effort for New Mexico.  The  Lobos face a tough American University team on Sunday.

American 1 – LMU 0 – Junior midfielder Dale Ludwig netted what proved to be the game-winning goal in the sixth minute of this one and the Eagles played solid team defense to secure a good win over a very competitive LMU team.  Dylan Herbert had one save to record his fourth shutout between the pipes this year for American.  The Eagles improve to 6-1-0. LMU drops to 5-2-0.

Utah Valley 1 – Gonzaga 0 – Aaron Meyer scored out of a set piece placing a shot in the upper right corner of the goal from just outside the box in the 12th minute of play to give the Wolverines the edge they needed to improve to 6-1-0 season to date.  Collin Partee recorded the shutout in goal for UV.

NIU 3 – Marquette 2 (ot) – Senior Taylor Cole utilized his left foot to net the game-winner for NIU in the 102nd minute of play with an assist from Cody Witkowski as NIU continues to find a way to win the close contests.  Garcia Giovanni and Luke Read contributed a goal each for NIU.

Georgia State 3 – Brown 2 – Georgia State went up 1-0 in the 28th minute when Eddie Wilding scored out of a penalty kick.  He scored again three minutes later to give GSU a two goal advantage.  Brown came back but Casey Shultis's goal in the 87th minute of play sealed the win for Georgia State.

Sacramento 1 – Pacific 0 – Brad Burngarner scored in the 69th minute of play to give Sacramento the win. Sacramento improves to 2-4-1.  Pacific drops to 1-5-0.

UCLA 4 – Cal Poly 1 – Adam Olsen scored in the 32nd minute of play to give Cal Poly a 1-0 lead but it was all UCLA after that.  Michael Amick and  Jackson Yueill contributed a goal each and Seyi Adekoya scored twice to get the Bruins back in the winning column.  UCLA is now 2-3-0.  Cal Poly is 3-2-1.