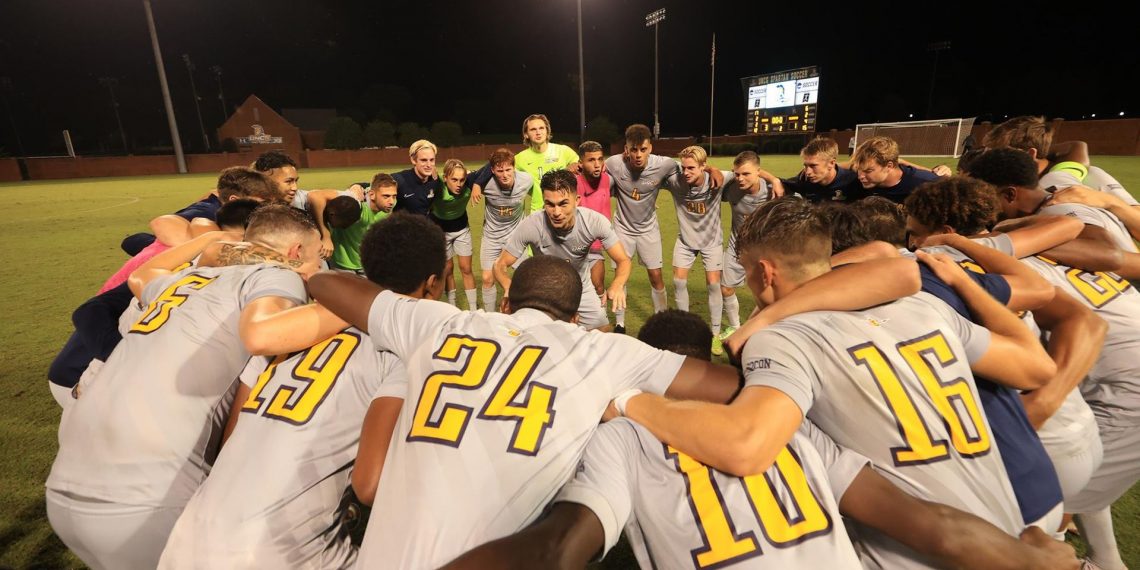 Expectations are high at UNCG Entering The 2022 Season with a solid core of players returning including five All-Conference Selections.

Theo Collomb – Forward – Collomb was UNCG’s top goal scorer the past two seasons. He scored 8 goals and contributed 3 assists in 2020 and 15 goals with 5 assists in 2021. He signed an MLS NEXT Pro contract with the Vancouver Whitecaps FC as the conclusion of two banner seasons. Collomb was the Co-Freshman of the Year and an All-Southern Conference First Team selection in 2020. In 2021 he was named the Southern Conference Player of the Year and a United Soccer Coaches and College Soccer News All-American.

Daniel Mangarev – Forward – Mangarev played in and started 16 games in 2021 scoring four goals and contributing three assists. Mangarev transferred to Virginia at the conclusion of his sophomore season. He was a 2021 All-Southern Conference Second Team selection.

Joey Skinner – Defender – Sinnner appeared in 18 games with 17 starts. He scored 4 goals and contributed 7 assists. Skinner was a 2021 First Team All-Southern Conference selection. He transferred to Clemson at the conclusion of his freshman season at UNCG.

The potential exists for significant improvement in the midfield if sophomores JC Ngando (5g, 8a), Jack Birch (2g, 1a) and Basile Marc (1g, 2a) who were starters as freshmen last year get the bump in play that often occurs between freshmen and sophomore seasons.

Chris Rich stated, “We are extremely excited about our 2022 class. It’s a great blend of domestic freshmen, transfers, and internationals. We already have a great foundation of returning players, and believe these additions will compliment those guys well. We still have some work to do to finish out the class but we are excited about the future.”

UNCG had one of the most productive and explosive offenses in the country last year. The Spartans scored a total of 52 goals finding the back of the net an average of 2.89 times per game. UNCG scored 3 or more goals in 10 games last year. They will seek to replicate that again in 2022 but the task of doing so became much more difficult when forward Theo Collomb who was UNCG’s top goal scorer in 2020 and 2021 elected to enter the professional ranks after two banner seasons in Greensboro.

Sophomore attacking midfielder JC Ngando (5g, 8a), the 2021 Southern Conference Freshman of the Year and a First Team selection, looks to be the catalyst and a key ingredient in the Spartan attack in 2022. Ngando had an impressive freshman season that he is well positioned to build upon in 2022.

Forwards junior Maycol Reyes (2g, 2a) and sophomore Sam Coad (1g, 2a) are among returning players who the Spartans will look to for a greater role up top. Both are capable of breakout seasons. Senior Micah Albert (2g, 2a) is among other returning forwards who look to be in the mix up-top in 2022 along with junior Cameron Fowler. Sophomore forward Yoshiya Okawa (6g, 1a), a transfer from Radford where he was a 2021 All-Big South Second Team selection, is among the newcomers who could provide an additional dimension to the attack.

The midfield includes experienced graduate student Theo Quartey (4g, 1a) and seniors Izaiah Vignali and Fernando Garcia (3g, 2a). In addition sophomores Ngando, Jack Birch and Basile Marc, who now have the benefit of a year of starting experience under their belts, have the potential to be difference makers and significant contributors to the Spartan attack in 2022.

For all the attention that the office received in 2021, it would be shortsighted to overlook the fact that UNCG posted ten shutouts last year and held a competitive slate of opponents to a total of only 14 goals and had the best goals against average in the Southern Conference. The bottom line is that the Spartans play on the defensive side of the ball looks to be good enough in 2022 to keep them in every contest they play.

Sophomore NIclas Wild, the 2021 Southern Conference Goalkeeper of the Year, returns in goal to anchor what should be a very good UNCG defense. Wild is coming off a 2021 season during which he had a 0.80 goals against average. Junior Jarrett Payne and freshman Nathan Parks also return between the pipes.

The backline will feature center backs senior Marco Milanese (2g, 1a), a 2021 All-Southern Conference First Team selection who transferred in last year from Akron and sophomore Emmanuel Hagan (1g, 2a), a 2020 (spring 2021) and 2021 All-Southern Conference selection. Milanese and Hagan combine to give the Spartans an athletic and physical center back duo that should be able to hold their own with anyone. Junior Ethan Conley, a seasoned and talented three-year starter returns at right back. Senior Matthew Cutler (0g, 1a) and junior Matthew Skinner are among other returning backs who will be counted upon in 2022. Junior transfer back Lucas Hales from Coastal Carolina will be among the newcomers who should compete for minutes.

There is a lot of excitement around the program at UNCG, as there should be after the Spartans returned to the NCAA Tournament field in 2020 for the first time since 2010 and won the Southern Conference regular season title in 2021. The Spartans 13 wins in 2021 was the highest number of wins in a single season since the 2006 team had 16. In addition, UNCG plays an attack oriented brand of soccer that is exciting and enjoyable to watch.

The Spartans will enter the 2022 season without the big play ability that All-American forward Theo Collomb brought to the pitch and several other players from the 2021 squad that have migrated elsewhere. The good news is that UNCG returns proven players at every position but depth and the emergence of a finisher up-top look to be critical success factors heading into the 2022 season. The midfield led by JC Ngando among others has the potential to be very good, a lot of young players gained valuable experience in 2021, Niclas Wild is solid is goal, and an impressive group of backs are slated to return.

Chris Rich, who will be in his third season as the Spartan head coach, has done a good job of putting in place the foundation of a winning culture at UNCG and raised expectations in a short period of time. The trend line is upward and the program has momentum. The Spartans had a very good 13 win season in 2021 that they can build on. Nonetheless, the 2021 season came to a disappointing and unexpected end when the Spartans were upset on their home turf in the semifinals of the Southern Conference Tournament. UNCG was nationally ranked during portions of the 2021 season and had a signature win over eventual national champion Clemson. A good case could be made that the Spartans were the best team in the country in 2021 not in the NCAA Tournament field.

The Spartans will again be among the frontrunners in the Southern Conference and the talent is on board for UNCG to keep on keeping on in 2022, but they are going to face strong resistance from Mercer, Belmont and Furman. Stay tuned, for what should be an interesting season.

Yoshiya Okawa – Forward – Tokyo, Japan – Sophomore transfer from Radford where he was an All-Big South Second Team and All-Freshman Team selection. Scored six goals and contributed one assist. Played in 16 games with 13 starts.