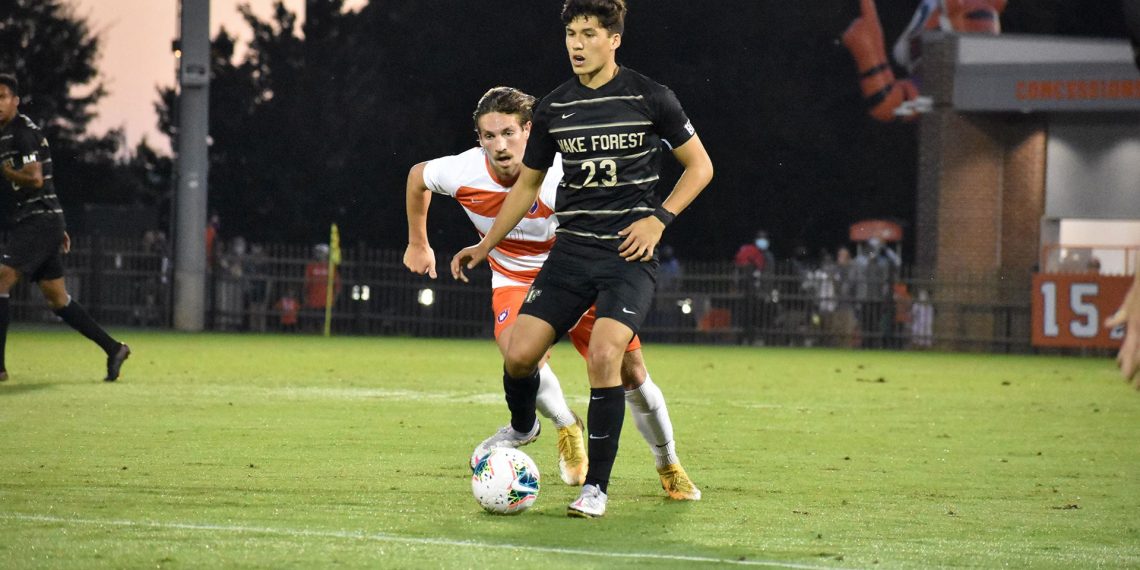 The unprecedented 2020 fall season with limited participation and contests skews any effort to rank the participants from a national perspective. College Soccer News takes a look at the teams that are competing in the fall and identifies the frontrunners, their strengths, and critical success factors.

Wake Forest – 3-1-0 – Consistent and Balanced. In the business world succession planning is the process of increasing the availability of experienced and capable employees that are prepared to assume greater roles as they become available. Wake Forest under Bobby Muuss does a great job of succession planing from a player development standpoint. When a void exists due to graduation or an early departure another capable Demon Deacon is always ready to assume the responsibility that exists.

The result has been a program with more wins over the past five seasons than any team in the country. When Wake Forest losses an All-American another potential All-American emerges to fill the gap as reflected in the transition from Jack Harrison to Jacori Hayes and Ian Harkes to Jon Bakero to Omir Fernandez and to Bruno Lapa. The Demon Deacons have had a first-round MLS Super Draft selection for the past five seasons.

This year the Demon Deacons are powered on the offensive side of the ball by senior Machop Chol, junior Kyle Holcomb, and sophomores Calvin Harris and David Wrona and their defense is anchored by goalkeeper Andrew Pannenberg.

The Demon Deacons began the season with wins over Louisville, NC State and UAB before sustaining a 2-1 loss on the road to Clemson. Wake Forest has another tough contest coming up on Sunday, October 18 when they host a North Carolina team that is 2-0-0. Their dance card also includes the opportunity to have another go at Clemson in Winston-Salem a little later down the road

Pitt has a high powered multi-dimensional attack led by sophomores Veljko Petkovic (3g, 1a) and Valentin Noel (2g, 1a), freshman Bertin Jacquesson (2g, 5a) and senior Alexander Dexter (2g, 2a). The unanswered question looks to be their productivity on the defensive side of the ball.

Pitt has a 3-1 win over Notre Dame on the road and wins at home over Syracuse 3-2 in overtime and Virginia Tech 4-2.  The Panthers have a tough contest coming up with Virginia in Charlottesville on Sunday, October 18. Last year Pitt topped the then number one ranked Cavaliers 2-0 when they faced each other in Charlottesville.

North Carolina – 2-0-0 – It should not come as a surprise to anyone that Carlos Somoano, who ranks second in the nation in winning percentage among active Division I coaches, has the Tar Heels back on track in 2020.

The jury is still out on how competitive North Carolina will be this year but the early returns include a gutsy 1-0 win over Clemson in Chapel Hill and a season opening 2-0 win over Duke in Durham. Upcoming matches on the road against Wake Forest on Sunday, October 18 and on Tuesday, October 27 against Clemson will test the mettle and the skill of UNC.

The unanswered question is whether or not the Tar Heel attack now has and can maintain the big play ability on the offensive side of the ball that it lacked down the homestretch last year. If they don’t, their margin for error will be very small

Clemson 3-1-0 – The Tigers are coming off a signature 2-1 win over Wake Forest.  This is a talented group with the team-oriented focus and the grit that one should expect from a Mike Noonan coached team.

You can bet the farm that Clemson will continue to improve as the season progresses but like everyone else in the highly competitive ACC their margin for error remains small. However, they will always have an edge when they play in Historic Riggs Field where they are undefeated in their last nineteen contests.

Kentucky 3-1-0 – After a season opening 1-0 loss to Notre Dame in South Bend the Wildcats rebounded to top Duke at home 3-0, Louisville at home 3-1, squeaked past Central Arkansas at home 2-1 in a contest that required extra time to determine a winner, and topped Mercer 3-1 at home on Wednesday night. Kentucky looked good in the wins over Duke, Louisville and Mercer but they came out flat in their contest with Central Arkansas which is problematic.

This is a team with a lot of talent but they need to take it one game at a time and consistently put in full ninety-minute shift in order to play to their potential.

Daniel Evans (2g, 1a) and Eythor Bjorgolfsson (2g, 2a) are keys to the attack up top while Kalil ElMedkhar (2g, 2a), Bailey Brouse (2g, 0a) and Marcel Meinzer (0g, 1a) are the pace setters in the midfield. Redshirt senior defender Aime Mabika (2g, 1a) anchors the defense and adds another dimension to the offense.

Kentucky has contests remaining with UAB on Saturday, October 17 and a return match on Friday, October 30 with Duke on the road. If they play to their potential, they should run the table but if not, they are vulnerable

Virginia 1-0-1 – The Cavaliers are coming off an outstanding 2019 season and are capable of another great season but at this point there are several unanswered questions due to the gaps that must be filled.

Last year Virginia had an explosive offense in addition to a very solid defense. The return of All-American goalkeeper Colin Shutler and defenders Andreas Ueland and Bret Halsey and the addition of transfer back Oliver Gerbig from Coastal Carolina should give the Cavaliers another stout defense.

Offensive productivity remains a key unanswered question. Senior Nathaniel Crofts and sophomores Axel Gunnarsson and Philip Horton look to be the go-to guys up top in the attack with much depending on their ability to convert the scoring opportunities that come their way.

George Gelnovatch has a lot of talent to work but this is a team that will experience a learning curve. The learning curve will be reduced by the fact that Gelnovatch is as effective as anyone in the country at making the adjustments that are needed to maximize the talents of his players.

Virginia did not begin play until October 9 due to cancellations. That showed in their season opener against a Louisville team that had already played several contests. Nonetheless the Cavaliers did what they needed to do to secure a 2-1 win over the Cardinals in overtime. The Cavaliers followed that up with a 1-1 tie with Virginia Tech on the road Wednesday night with graduate student midfielder contributing the Cavalier goal out of a set piece.

Virginia will continue to get better as they settle into a rhythm and system of play but the fact remains that they are a work in progress. The Cavaliers have a big contest coming up on Sunday, October 18 when they host a very good Pitt team that will test their defense

Coastal Carolina – The Chanticleers opened the season with a 1-0 win at home over previously undefeated Georgia State. Coastal Carolina warrants recognition under the often utilized but sometimes misleading early season logic of “I beat you so I must be better than the teams that you beat.” Georgia State came into contest with Coastal Carolina with a 5-0-0 record that included wins over Mercer, South Carolina, UAB and Georgia Southern.

This is a new look Coastal Carolina team with a twenty-five member 2020 recruiting class that included eighteen freshmen and seven transfers.  Freshman back Mael Couteau netted the game winner in the season opening win over Georgia State and senior transfer Tor Saunders from Akron recorded the shutout in goal for Coastal Carolina.

The Chanticleers have back-to-back contests on their dance card coming up with Central Arkansas on Friday, October 16 and Sunday, October 18 in Atlanta.