The Action Begins To Pick Up This Weekend With Several Very Competitive College Soccer Games On Tap. 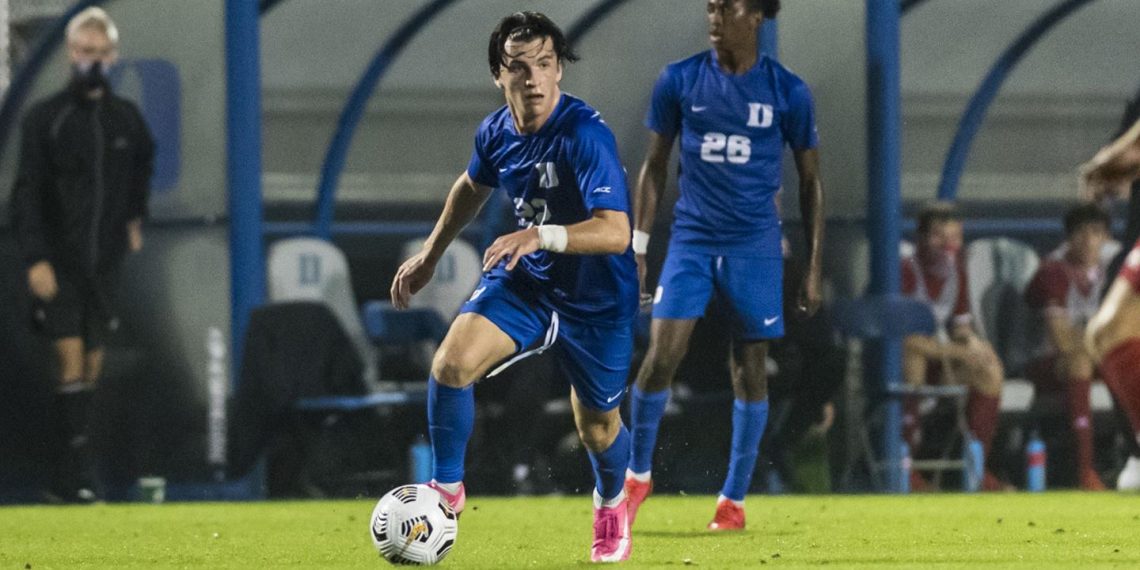 UNCW (2-0-0) vs. Duke (2-7-1) – Friday – UNCW comes into this one with a good 2-0 win at home over UNCG and a 3-2 win on the road over Charlotte in which they jumped out to a 3-0 lead before allowing Charlotte to get back into the contest with two goals within the span of a minute in the second half. It has been offense by committee so far at UNCW with five different players contributing a single goal.

A young Duke team completed the 2020 fall season with a 2-6-0 record and is 0-1-1 to date in the spring season with a 0-0 tie with Charlotte and a 1-0 loss in overtime to Kentucky. It is just a matter of time before this Duke team jells and begins to create some momentum on the offensive side of the ball. That could happen in this contest if the young Blue Devils settle in and guys like senior forward Daniel Wright, graduate student midfielder Jack Doran and senior back Matthias Frick set the pace.

Washington (2-1-0) vs. California (0-1-0) – Saturday – Washington will seek to get back on track after a 2-1 loss at home to Oregon State in their home opener. The Huskies had a commanding 16-6 advantage in shots and played well on the defensive side of the ball but Oregon State forward Gloire Amanda played better. It was a disappointing loss for the Huskies since holding serve when playing at home is vital in Pac-12 play. Midfielders Dylan Teves, Gio Miglietti and Lucas Meek look to be the keys to Washington’s offensive productivity.

Cal opened their season at home with a 3-1 loss to Stanford.  The fact that the Golden Bears now have a game under their belt after such a long layoff could give them the bounce that they need to make this one competitive. This is an early season must win contest for both teams.

UCLA (1-1-0) vs. Oregon State (4-0-0) – Saturday – The Bruins have a 3-0 season opening win over San Francisco, a 1-0 loss on the road to a very good Loyola Marymount team, and a 1-1 tie at home with San Diego State in their Pac-12 opener that easily could have gone either way. There are a lot of experienced players on the pitch for the Bruins but it is difficult to get a handle on just how competitive this UCLA team is going to be. It is reasonable to conclude that they are playing much better as a team in Ryan Jorden’s second season at the helm of the program than they did in 2019. Nonetheless their margin for error remains slim.

Oregon State is off to an impressive start under third year head coach Terry Boss. The Beavers are coming off a signature 2-1 Pac-12 win on the road over Washington. In their four wins to date, Oregon State has scored a total of eleven goals while allowing only one.  Gloire Amanda (6g, 3a) has powered a multi-dimensional Oregon State attack that includes several very capable finishers.

Oregon State should prevail in this one but it would be a mistake to look past the Bruins or any other Pac-12 opponent for that matter.

St. John’s (2-0-0) vs. Seton Hall (2-0-1) – Saturday – St. John’s travels to South Orange in this Big East spring season opener for both programs. Junior forward Tani Oluwaseyi started the 2021 spring season where he left off in 2019. The power forward netted the game-winning goal for the Red Storm in their season opening win over non-conference foe Saint Joseph’s and scored twice and contributed an assist in their subsequent 4-2 win over Stony Brook. Oluwaseyi is not the only playmaker on the offensive side of the ball for the Johnnies but he is the guy that Seton Hall must contain in order to prevail.

Seton Hall opened the spring season with a back and forth 3-3 tie with non-conference opponent NJIT. They subsequently tightened things up on the defensive side of the ball posting shutouts over LaSalle 1-0 and FDU 2-0. That’s noteworthy since it is the first time since 2010 that the Pirates recorded back-to-back shutouts. Junior forward CJ Tibbling looks to be the X-Factor on the offensive side of the ball for Seton Hall.

Providence (1-0-0) vs. Connecticut (1-0-0) – Saturday – Connecticut took care of business in their season opening 3-0 win over Sacred Heart. It was a good first step for a UConn team that seeks to bounce back from a disappointing 2019 season during which they were 5-12-1 overall.  Things will be a little tougher this week when the Huskies host a Providence team that began the spring season with an impressive 4-0 non-conference win of their own over a very good Rhode Island team.

The contest with Providence should provide a little more insight into just how competitive UConn will be in 2021. Providence was 16-7-0 with a 6-3-0 mark in Big East play in 2019. This one is also special since it marks UConn’s return to Big East Conference play after several seasons as a member of the American Athletic Conference.

Bowling Green (2-0-0) vs. Marshall (2-0-1) – Bowling Green powered by senior playmaker midfielder Chris Sullivan among others comes into this one with momentum after opening the season with a 3-2 come from behind win on the road over Dayton and a 2-1 win over Syracuse in a match played in Buffalo.

Marshall is coming off a banner 2019 season in which they were 16-3-3, won the CUSA regular season and tournament titles, and earned the programs first ever invite to the NCAA Tournament. The Herd opened the 2021 spring season with a 1-1 tie with Ohio Valley followed by wins over West Virginia University Institute of Technology and ETSU. Marshall now finds themselves in the role of the hunted instead of the hunter. Redshirt sophomore Milo Yosef is the go-to guy in Marshall’s attack.

This looks to be one of the more intriguing matches of the weekend. Marshall is the favorite on paper but Bowling Green could surprise.

UCF (1-2-0) vs. Tulsa (1-0-0) – Saturday – UCF has not lived up to expectations to date with a season opening 1-0 loss at home to Tulsa, a 1-0 win on the road over Temple, and an unexpected 2-1 loss at home to South Florida. A loss in this one would place UCF in an even bigger hole. A win would be a first step toward digging their way out of the hole they are in. This UCF team is much better than their record indicates but they have been unable to settle into and sustain a rhythm.

Tulsa has not played since their season opening win on February 6 over UCF in Orlando. It will be interesting to see how they respond in this American Athletic Conference contest. The winner will have to put in a full ninety-minute shift. Clearly UCF will not be looking past Tulsa after being upset by them in Orlando in their season opener.

Indiana (2-0-0) vs. Northwestern (1-1-0) – Saturday – Indiana is clearly the favorite heading into this one. The Hoosiers have a 3-0 win over Wisconsin and a 3-0 win over Ohio State. Sophomore forward Victor Bezerra has netted four of the six goals that IU has scored to date.  The Hoosier defense has also been rock solid.

Northwestern under head coach Tim Lenahan, who has indicated that the 2021 spring season will be his last at Northwestern, opened the season with a 4-1 loss to Michigan in which the Wildcats scored the first goal and led 1-0 at halftime but allowed the Wolverines to dominate with four goals in the second stanza. Northwestern regrouped and responded with a 5-2 win over Wisconsin on the road with Ugo Achara Jr. contributing two goals.

Lenahan will have his team prepared but Northwestern will have to put in a full ninety-minute shift with no letdowns in order to have a chance to top the Hoosiers. Look for Indiana to apply pressure from the get-go.

Ohio State (0-1-0) vs. Maryland (0-1-0) – Saturday – Maryland has pretty much dominated the series with Ohio State since joining the Big Ten Conference. The Terps opened the spring season with a 3-2 loss to Penn State in which they allowed the Nittany Lions to jump out to a 3-0 lead before they got into gear and responded with two goals to at least make the score respectable. Freshmen midfielder Joe Suchecki and forward Jacen Russel-Rowe scored the goals for the Terps.

It will be interesting to see if Maryland comes out on the front foot and is able to put in two good halves of play on both sides of the ball. This team has the potential to be very good if they can jell and play Maryland soccer.

Ohio State opened the spring season with a 3-0 loss to Indiana. A good showing would be a huge plus for an Ohio State program that needs a little success that they can build on.