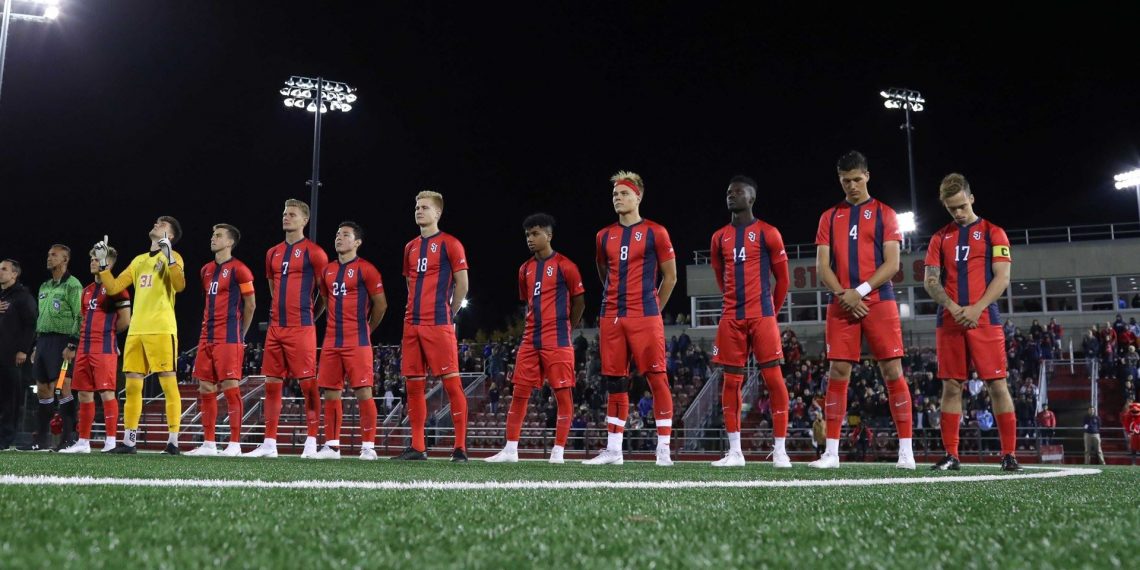 St. John's has a proud past that includes a berth in the NCAA Tournament twenty-one times in the twenty-nine seasons that Dr. Dave Masur has been at the helm of the program, four trips to the College Cup, and a national championship in 2008. A stellar 14-5-1 overall record in 2019, a return to the NCAA Tournament for the first time since 2013, and a trip to the Sweet Sixteen resulted in another successful season at St. John's that energized the program and returned the dialogue to the present.

Departures and Gaps – Key departures due to graduation include midfielders Brandon Duarte (2g, 3a) a 2019 All-Big East Second-Team selection who transferred to St. John's after playing for Ancilla College for two seasons and Niko Petridis (4g, 4a) who transferred to St. John's as a junior after playing for two seasons for Connecticut. The Red Storm will also have to replace playmaking midfielder Skage Simonsen (3g, 6a) who was the All-Big East Freshman of the Year in 2018 and a repeat All-Big East Second Team member in 2019.

Opportunity for Improvement – All five of St. John's losses last year were to teams that advanced to at least the second round of the NCAA Tournament. The Red Storm lost to Maryland 1-0 in overtime, to Georgetown 3-0 and Providence 2-0 in regular season Big East play, to Providence 2-1 in the Big East Tournament, and to Virginia 3-0 in the NCAA Tournament. St. John's ability to win the close contests in 2020, particularly against top level teams, will depend on their capacity to consistently put in a full ninty minutes of play without costly lapses in play. The Red Storm were at their best last year when they were able to put pressure on their opponents. The Johnnies were vulnerable when the reverse happened and their opponent was able to apply pressure that disrupted their tempo and reduced the amount of time and space they had to work with in the midfield.

Coaches Recruiting Class Comment – Dr. Dave Masur announced the early addition of three transfers who will enroll in the spring semester. Masur stated, "We're excited to add three talented players who look like they can have an immediate impact on our program. They strengthen our team at all three field positions and come with a variety of qualities that will add depth to our roster this fall."

Summary – Saint John's was a young team last year with eight underclassmen in key roles. There is reason for optimisim in 2020 with a strong and deep roster of players slated to return and a talented group of newcomers, in addition to the three transfers already announced, in the pipeline. St. John's jumped from a seven win season in 2018 during which they scored a total of eighteen goals and allowed twenty-one to a fourteen win campaign in 2019 with an up-tempo offense that found the back of net a total of thirty-eight times and a stout defense that only allowed nineteen goals.

Junior Tani Oluwaseyi returns in 2020 to give the Red Storm a lethal presence up-top. The Red Storms' resurgence on the offensive side of the ball in 2019 can be attributed in large part to the playmaking ability of Oluwaseyi who had a breakout season during which he became the first St. John's player in more than two decades to be named the Big East Offensive Player of the Year. Oluwaseyi's eleven goals were the most scored in a single season by a St. John's player since Simone Salinno scored fourteen times back in 2003. Oluwaseyi served notice early in the 2019 season that he was going to be a difference maker when he scored the game-winner in overtime on the road to give the Johnnies the edge they needed for a confidence and momentum building 1-0 win over a very good N.C. State team.  Junior Josiah Crawford (1g, 0a) who saw action in fifteen matches last year with eight starts is among other returning players who could contribute up top in 2020.

Some reloading will be required in the midfield to fill the void that exists due to the departure of Brandon Duarte (2g, 3a) who was a two-year starter, Niko Petridis (4g, 4a) and Skage Simonsen (3g, 6a) who transferred to SMU. Simonsen was a two-year starter and key playmaker who assisted on five of Oluwaseyi's eleven goals. The very best St. John's teams under Dr. David Mauser have featured talented midfielders like Jeff Matteo (2001), Matia Damiani (2003) and Nelson Becerra (2008) who had the ability to control the middle third, maintain possession, and add punch to the offense.

Junior midfielder Brandon Knapp, a two-year starter, team captain, and 2019 All-Big East Third Team member, is a prime timer who returns to set the pace on both sides of the ball in the middle of the park. Redshirt senior Matt Forster (1g, 1a) who has three years of starting experience under his belt and junior Einar Lye (5g, 5a), a 2019 All-Big Ten Third Team selection, are among returning linkmen who have the ability to add an additional dimension to the offense. Junior Ethan Shaw who appeared in eleven matches last year with five starts and sophomore Atila Ashrafi (2g, 0a) who played in eight games with two starts are among other returning midfielders who should be in the mix for additional minutes in 2020. Senior Alejandro Riquelme, a transfer from Siena, is a playmaker who will add depth and experinece to the midfield.

The backline looks to be in good shape with junior center backs Matt Chandler (0g, 1a) and Luke Hansen (0g, 1a) returning to anchor the defense along with seniors Rfael Bustamante (1g, 1a) and Johan Aquilon who was hampered last year by injury and sophomore Jared Juleau (1g, 2a). Junior Sanoussi Sangary is among other returning backs who will vie for a greater role in 2020. Junior back Anthony Herbert, a transfer from rom Farileigh Dickinson, is a solid addition who will likely challenge for a starting role.

The Johnnies successfully utilized a two-goalkeeper system last year with Jan Hoffelner playing the first stanza and Luka Gavran taking over in the second half. Dual netminders can be problematic but it worked well for St. John's. Both Hoffelner, a senior, and Gavran a red shirt sophomore return in 2020 to give the Red Storm an experienced and battle tested duo in goal.

St. John's has the talent, experience, and depth to have a high ceiling in 2020. If everything falls into place, a first place finish in the Big East Conference and a deep run in the NCAA Tournament are clearly in play.

Anthony Herbert – Defender – Brooklyn, New York – Progress High School – Junior transfer from Fairleigh Dickinson where he appeared in thirty-eight contests with thirty-seven starts as a center back. Named to the 2019 United Soccer Coaches All-Northeast Region Third Team.  All-NEC Second Team selection in 2019 and 2019. Played for Trinidad and Tobago U-17 and U-20 National Teams. Played for the New York Red Bulls Academy.

Wesley Leggett – Forward – Lawrence, New Jersey – Princeton Country Day – A sophomore transfer from the University of Connecticut where he played in six contests in 2019. Tallied twenty-one goals and five assists during senior season and twenty goals and four assists as a junior at  Princeton Country Day. Played for the Match Fit Academy for four years.