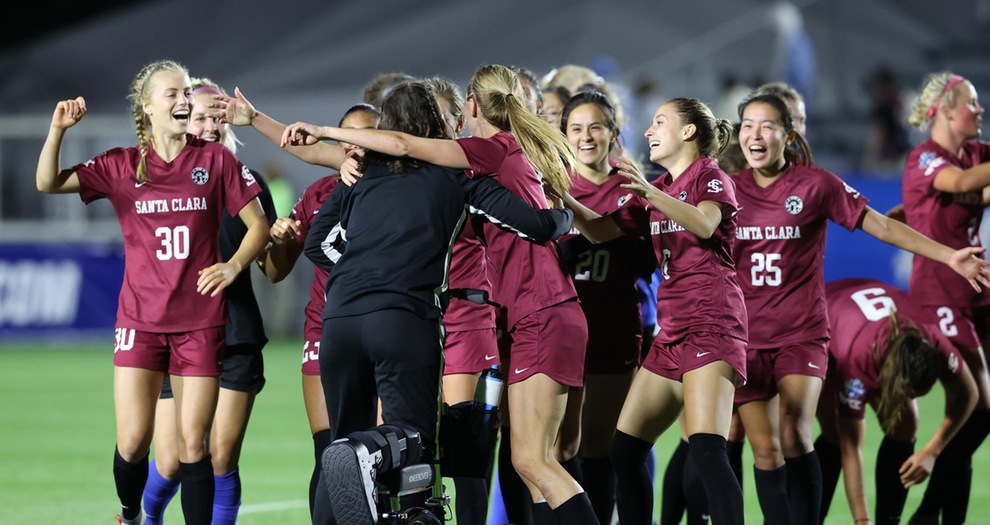 The Broncos Claim The Programs First National Championship Since 2001.

It seemed fitting that the championship match for a challenging 2020 college soccer season that began in the fall of 2020 for some and the spring of 2021 for others would come down to an always unpredictable penalty kick shootout to determine the winner. It is always difficult for a championship to be decided by a shootout but the bottom line is that there has to be some way to decide who prevails.

Prior to the start of the contest, there were four unanswered questions that seemed likely to factor into the outcome.

The first was whether or not Santa Clara’s explosive front line led by senior Kelsey Turnbow and sophomore Izzy D’Aquila would be able to breakthrough an FSU defense anchored by redshirt junior center back Emily Madril and freshman goalkeeper Kristina Rogue that had allowed a total of only seven goals against a very competitive slate of opponents.

The second question was whether or not Florida State’s normally high powered and multi-dimensional offense that averaged 2.67 goals per game would get back on track and into a rhythm after being shutout in their two previous contests.

The third question was the impact that Santa Clara freshman Sally Menti and particularly FSU’ redshirt senior midfielder Clara Robbins would have on the attack of their respective teams. A subset of this one was the play of FSU’s All-American defensive midfielder junior Jaelin Howell and Santa Clara’s All-American back senior Alex Loera and the impact they would have on the game. Both are the type of players whose contribution doesn’t necessarily show up in the stats but make no mistake, they are key components who have an impact on the outcome.

The fourth pertained to the unique conditions surrounding the season that made it the first in which the traditional grind was more mental than physical. The question was the impact that this might have on the mindset of the teams and would it give either an edge in terms of playing through the inevitable ebbs and flows of the game and their ability as the contest progressed to make the quick decisions needed to exploit opportunities.

As expected, all of the above factors and the individuals mentioned above did have an impact on the outcome but no single factor by itself stood out as the difference maker in a match that could easily have gone either way.

Most assumed that the contest between the number one seed Florida State and the number eleven seed Santa Clara would be a wide-open run and gun multi-goal match between two teams with different but very capable offenses that averaged two and a half goals per game. Both teams managed to score but both never fully settled into a rhythm on the offensive side of the ball.

Teams usually make only minor tweaks heading into a national championship contest. It is usually the strengths and system of play that both teams utilized to get to this point going head-to-head to determine who prevails.

Florida State surprised all by opening the contest with a starting lineup that included forward Jenna Nightswonger and midfielder Yujie Zhao who normally substitute in. The Seminoles also implemented a defensive scheme that included one on one marking of Santa Clara forwards Kelsey Turnbow and Izzy D’Aquila.

It was a gutsy move on the part of veteran Florida State head coach Mark Krikorian that veteran Santa Clara head coach Jerry Smith acknowledged disrupted the ability of his team to settle in. The tactic was designed to keep the Broncos from getting the ball to the feet of Turnbow and D’Quilla up-top with real estate that the could exploit. It also was designed to force Santa Clara to have to utilize the flanks.

The strategy created the potential for Santa Clara to take advantage of the space they had down the flanks but they never fully did in part because FSU did a good job of tracking numbers back when they needed to. It also limited the number of scoring opportunities that the highly dangerous duo of Turnbow and D’Aquila had up top.

On the other hand, Florida State’s defensive scheme and the adjustments associated with it hampered their effectiveness on the offensive side of the ball and pushed Seminole midfielder Clare Robbins, their leading scorer, deep on the right side of the pitch and limited the opportunities that she had to create havoc in the attacking third.

The first half ended as it started with the score tied 0-0. The match continued to be one of ebbs and flows until the 63rd minute of the game when FSU forward Jenna Nighswonger made a nice move off the dribble from the top corner of the box to create a small seam and the angle that she needed to skillfully drive a left-footed shot that glanced off the far post and into the back of the frame to give the Seminoles a 1-0 advantage and the momentum. Nighswonger’s goal was set up by a nice move and pass on the part of midfielder Yujie Zhao.

Chances seemed pretty good at the time that Nighswonger’s goal would hold up and that the Seminoles were headed toward securing their third national championship. To their credit the Broncos, who found themselves down a goal down for the first time in the tournament, maintained their composure and continued to push forward in an organized manner seeking to create a situation that they could exploit to secure the equalizer. That situation presented itself in the 84th minute beginning with an errant pass that resulted in a turnover followed by a miscue in the back created by an alert move from Kelsey Turnbow that gave Turnbow the angle and space she needed to utilize her left foot to send a shot inside the far post to tie the contest. The goal gave Santa Clara new life and sent the Bronco faithful on hand into a frenzy.

The contest remained tied at the end of regulation and two overtime periods and set the stage for the national championship to be decided by a pk shootout. Florida State advanced to the championship match after scoreless contests with ACC foes Duke and Virginia in which they prevailed in a shootout. However, the third time was not to prove to the charm for the Seminoles who gave Santa Clara the edge they needed to prevail 4-1 in the shootout when their first two attempts were wide right and Santa Clara’s Julie Doyle, Menti, Turnbow, and D’Aquila successfully converted their attempts from the spot.

A season like no other began with little or no fans in the stands but ended with a spirited and sizeable contingent on hand in the stands to support both programs. The win, with a group of former Santa Clara greats on hand representing the 2001 Bronco team that won the programs last NCAA Championship, signaled a return to that level of prominence for Santa Clara.

The size of the crowd witnessing the contest and the enthusiasm they displayed reflected a step forward from the difficult days of the pandemic and hopefully signaled that better days are ahead.

It was a heartbreaking and disappointing loss for an outstanding FSU team that concluded another banner season with the programs fifth trip to the national championship contest and a 13-1-2 overall record.

It was a big time and gutsy win for a Santa Clara team out of the West Coast Conference that continued to improve as the season progressed and found a way to come up with the big plays that they needed to secure the programs second national championship and conclude the year with an 11-1-0 record.