Indiana Tops Pittsburgh To Advance To The National Championship Contest For The 16th Time. This Hoosier Team Seeks To Secure Its Own Place In The Storied And Rich History Of Indiana Soccer. 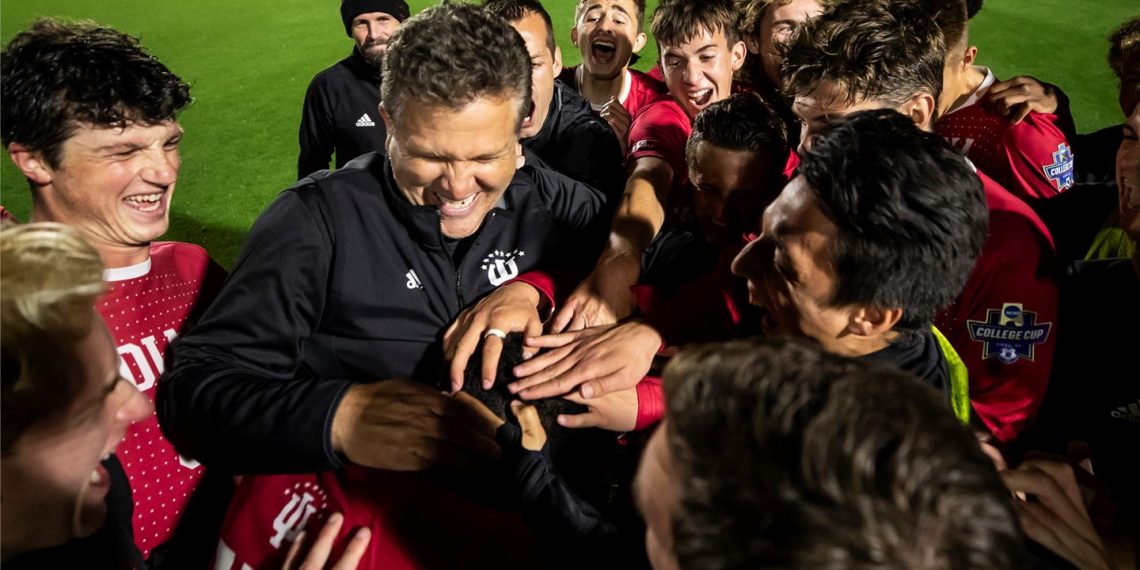 The Hoosiers Have The Opportunity To Claim The Program’s 10th National Title On Monday.

This national semifinal contest was played on Friday night before a crowd on 2,667 at Shalen’s Stadium in Cary, North Carolina that included legendary former Hoosier head coach Jerry Yeagley.

Pittsburgh dominated the possession, had a 14 to 7 advantage in shots, and a 7-3 advantage in corner kicks but Indiana sophomore forward Herbert Endeley’s goal in the 79th minute of the match gave a team and role-oriented Indiana side the edge they needed to survive and advance past number two seed Pittsburgh on Friday night. Endeley’s goal came after he received a pass a few feet from the touchline from junior defender Nyk Sessock and weaved his way into the box through two defenders to create the space that he needed to launch a rocket into the back of the frame from 18 yards out.

A bend but don’t break Indiana defense led in goal by sophomore All-American sophomore Roman Celentano kept a high octane and multi-dimensional Pittsburgh attack powered by midfielders Valentin Noel (14g, 2a) and Velijko Petkovic (9g, 8a) and forwards Alexander Dexter (7g, 5a) and Bertin Jacquesson (4, 7a) among others at bay. Celentano made several huge saves under intense pressure that only a few goalkeepers would likely have been able to make.

Pitt came into the contest with Indiana having scored a total of 13 goals while allowing only one in their NCAA Tournament wins over Monmouth, UCF and Washington. The Hoosiers played their way into the College Cup by advancing past St. Francis Brooklyn, Marquette and Seton Hall.

Indiana did a good job of keeping their shape on the defensive side of the ball and maintaining the numbers that they needed behind the ball to contain a Pitt Panther offense that is as good as any team in the country at attacking out of the back and quickly pushing numbers forward into space to create goals in transition.

Pitt’s ability to put pressure on their opponents required the Hoosiers to pick and choose in a disciplined manner the opportunities that they pursed on the offensive side of the ball. That in effect limited the number of opportunities that IU All-American forward sophomore Victor Bezerra (12g, 4a), redshirt sophomore forward Ryan Wittenbrink (5g, 2a) and Endeley (4g, 2a) had with the ball to their feet in the attacking third.

The margin for error in this contest was slim for both teams but in the end the Hoosiers were able to come up with the big goal that they needed to survive and advance to the championship game on Monday at 8 p.m. against a Marshall side that seeks to make a little history of their own and secure the programs first ever national championship.

A Pittsburgh team that was considered an easy win before the arrival of head coach Jay Vidovich continued its meteoric rise in the college soccer ranks with and outstanding season in which they advanced to the College Cup for the first time in program history and concluded the year with an impressive 16-4-0 season on which they will seek to build.

Indiana has had several close contests to date on the road to the championship match but has managed to prevail. Their margin for error on Monday will again likely be small as they go up against a physical and possession-oriented Marshall side that has also been adept at finding a way to survive and advance and is equally motivated to win it all.