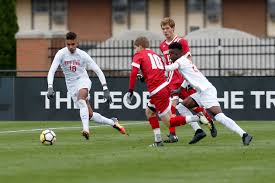 Ohio State head coach Brian Maisonneuve's recruiting class consists of four transfers and four freshmen who he hopes will fill some immediate needs while adding quality depth in other areas.  Junior transfer forward Matteo Bennati who played for Belmont the past two seasons and sophomore transfer forward Luke Kiley from Georgetown look to be among the members of the class who could help jump start the attack.

Departures and Gaps – The Buckeye's 2018 roster included only four seniors.  Key losses due to graduation include midfielders Brady Blackwell (0g, 1a) and Michael Prosuk (1g, 0a).

Opportunities for Improvement – There is ample room for improvement on both sides of the ball for a team that scored a total of only eight goals last year while allowing thirty-five.  The lack of offensive firepower and inability to finish in the attacking third in 2018 gave Ohio State little margin for error.  The emergence of a playmaker or two could significantly enhance the Buckeyes win total and confidence in 2019.

Coach's Recruiting Class Comment – Maisonneuve stated, " As a staff we are very excited about these student-athletes." Not only are they our first class as a coaching staff, but they represent the type of soccer players and young men that we want in our program.  On the field, they are a versatile class with a high soccer IQ and we are very excited to see them develop, both on and off the field." Regarding the four incoming transfers Maisonneuve stated, "They add a lot of experience to our roster and some positional needs."

Summary – Growing pains often accompany the transition that occurs when there is a change in coaching staffs particularly when it involves the replacement of a long term head coach like John Bluem who retired after serving as the Buckeye head coach for twenty-one seasons.  The fact that Ohio State was 1-15-2 overall last year with a 0-7-1 mark in Big Ten play pretty much speaks for itself.  Weaknesses are exploited in the highly competitive Big Ten Conference but you are going to struggle at any level of play when you score an average of 0.44 goals per game and allow an average of 1.94 goals per contest.  Buckeye head coach Brian Maisonneuve knows success, having experienced it as a player and assistant coach at Indiana.  Accordingly, he will enter his second season at the helm of the Ohio State program 2019 season knowing that he has his work cut out of him. The addition of four transfers who will participate in the spring season should help create competition from within and help bring about improvement.  No player's position in the starting lineup is safe after a one win season.  Hopefully the experience that the coaching staff and returning players gained last year and the infusion of the newcomers will result in a turnaround at Ohio State in 2019.

Matteo Bennati – Forward – Genova, Italy – A junior transfer from Belmont where he was named the Horizon League Freshman of the Year in 2017 and an All-Southern Conference Second Team selection in 2018. He scored three goals in 2017 and seven goals in 2018.

Samuel Buzzas – Defender – Bend, Oregon – A redshirt junior transfer from Xavier where he appeared in twenty-nine contests over the past two seasons including eight starts in 2018. He was named to the Big East All-Freshman Team in 2017.

Luis Hernandez – Defender – Columbus, Ohio – A transfer from the University of Kentucky where he appeared in one contest in 2018. Played for the Columbus Crew Academy for five seasons.