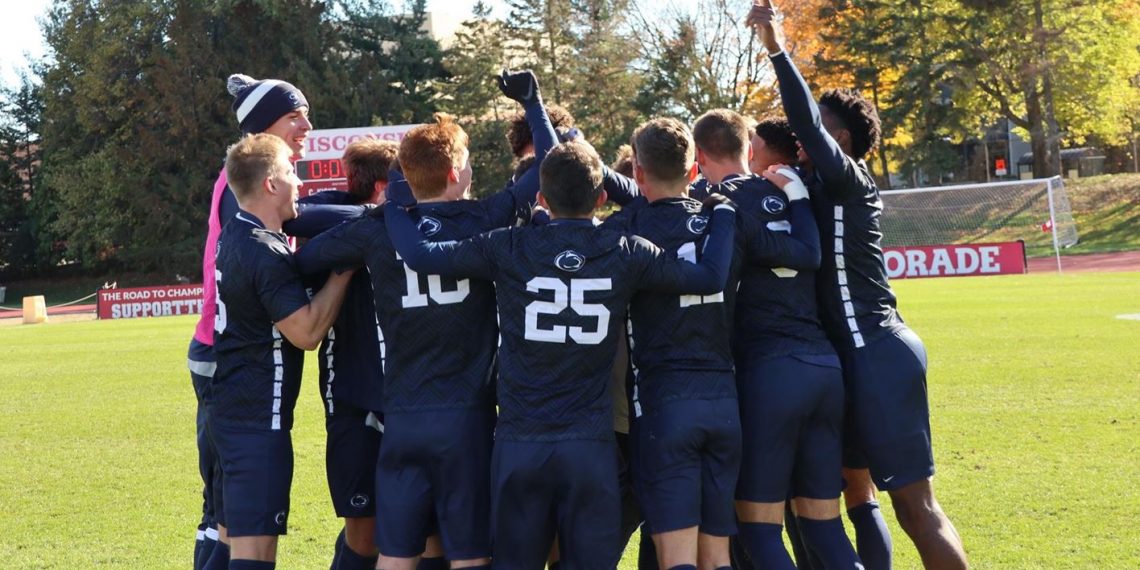 Indiana Is Normally The Prohibitive Favorite But That Is Not The Case This Year. Penn State And Maryland Enter The Tourney As The Top Two Seeds. The Hoosiers Come IN As The Number Three seed. THe Quarterfinals Of What Looks To Be A Wide Open Big Ten Tourney Begin On Sunday At Campus Locations.

It has been an unusual up and down season for teams in the big ten as it has been for most teams in conferences coast to coast. teams have normally jelled at this point but that does not seem to be the case this year. it will be interesting to see which teams get hot in tournaments across the country.

Michigan State (6-8-2/2-4-2) – It has not been a banner season for the Spartans but there have been positives. A 4-3 win over Notre Dame in South Bend after trailing 3-1, Big Ten wins over Rutgers 2-1 and Ohio State 1-0, and ties on the road in Big Ten play with Michigan 2-2 and Wisconsin 1-1 have been the high points. However, overall the Spartans have struggled to put together the consistency needed to secure a winning season.

Michigan State has a lot of grit but they remain a work in progress with a very small margin for error. The Spartans have fallen onto hard times with a losing record the past three seasons in a row. Prior to that they advanced to the College Cup in 2018, earned a berth in the NCAA Tournament in 8 of the last 10 years, and played their way into the Elite Eight in 2013, 2014, 2017 and 2018.

Penn State (10-6-1/6-2-1) – The NIttany Lions won the Big Ten title for the first time since 2013. They had a disappointing three game losing streak in October that included a 2-1 loss to Akron on the road, a 1-0 loss at home to Indiana, and a 2-1 loss on the road to Ohio State but rebounded to close out regular season play with key Big Ten wins over Maryland 3-2 in which they came from two goals down to prevail and Wisconsin 2-0.

Midfielders Andrew Privett (7g, 4a) and Seth Kuhn (3g, 7a) and forwards Peter Mangione (6g, 2a), the Big Ten Offensive Player of the Year, Daniel Bloyou (3g, 6a) and Liam Butts (4g, 0a) add punch and balance to Penn State’s offense. Backs Brandon Hackenberg, Alex Stevenson and Femi Awodesu among others and goalkeeper Kris Shakes anchor a bend but don’t break Nittany Lion defense that has allowed a total of 17 goals.

Prognosis – This one could be close for awhile and may not be a high scoring game but Penn State powered by Mangione and Bloyou should take control and prevail.

Wisconsin (7-6-3/3-4-1) – The season has been a series of streaks for Wisconsin. They have played everyone close which is a positive and are a team that is capable of winning any match they play. The Badgers began the season 0-2-2 during which time they allowed four goals and scored two, then went on a 7-0-1 roll (including a 1-0 win over Maryland) during which they scored 14 times and allowed only 1 goal, before losing their last four contests during which they time they allowed a total of 6 goals and didn’t score. This is a team without a lot of offensive firepower which hampers their effectiveness when they have to chase a game from behind. Despite their struggles down the home stretch, it would be a mistake for any opponent to look past them.

Michigan (7-6-3/4-3-1) – This is a good but not vintage Michigan team. With the exception of a 2-1 win in overtime over Indiana in Bloomington and a 2-1 loss to Ohio State, the Wolverines have pretty much won the contests that they were expected to win and lost those that they were not. Their losses in Big Ten play have been to Maryland 2-1, Penn State 2-1 and a regular season end loss to Ohio State 2-1 in which the Buckeyes netted the game-winning goal in the last minute of regulation. Kevin Buca (5g, 2a) and Marc Ybarra (3g, 2a) are among the key playmakers on the offensive side of the ball for Michigan. The Wolverines have been inconsistent in their ability to put together the combinations of passes needed to generate good goal scoring opportunities.

Prognosis: Michigan topped Wisconsin 1-0 when the two face each other on October 16 in Ann Arbor. These teams are pretty evenly matched so the rematch could go either way. There is a pretty good chance this one will be decided by a single goal.

Rutgers (9-5-2/3-4-1) – The Scarlet Knights began the season with a 7-0-1 record that included a 2-1 win over Indiana in Bloomington. They rocketed upward in the national polls but were unable to sustain that pace going 2-5-1 for the remainder of regular season play to finish with a 9-5-2 overall record and 3-4-1 mark in conference play which was good for the number six seed and a return ticket to Bloomington to face Indiana.

The Scarlet Knights enter the tourney with the momentum of a 4-0 regular season ending win over an Ohio State team that is a step or two behind Rutgers in their effort to climb upward in the Big Ten hierarchy. Junior forward Jackson Temple (6g, 2a) has been the go-to guy in a balanced Rutgers attack while junior goalkeeper Oren Asher and graduate student back Vincent Borden have anchored a defense that has allowed a total of 17 goals.

Indiana (12-4-1/5-3-0) – The Hoosiers entered the season as the number two ranked team in the country and briefly held the number one spot early until they were unexpectedly upset at home by Creighton 3-0 in the third game of the season. Indiana has not had the season to date that many thought they would have but they still managed to be in contention for the Big Ten regular season title up until a regular season ending 2-0 loss to Maryland.

After losing Big Ten matches to Rutgers and Michigan, Indiana tightened things up on the defensive side of the ball to pull themselves up by the bootstraps recording seven consecutive shutouts.

On the offensive side of the ball IU looks to be a team that at times is simultaneously playing with one foot on the brake and one foot on the gas. In other words, they are very cautious in opening up their attack. That may not be an accurate assessment but if accurate, it may absolutely be the best strategy for Indiana to follow at this point. However, a good case could be made that it hampers the creativity and the explosiveness if their attack.

The fact remains that this is a talented Indiana team but likely a team that has not fully jelled. Whether or not Indiana’s best soccer of the 2021 season is in front of them remains to be seen.

Junior forward Victor Bezerra (6g, 5a) and freshmen forwards Samuel Sarver (6g, 4a) and Tommy Mihalic (5g, 1a) have been the Hoosiers top goal scorers on the season. Herbert Endeley and Maouloune Goumballe (1g, 1a) are among the X-Factors on the offensive side of the ball for Indiana moving forward. Junior goalkeeper Roman Celentano and junior back Daniel Munie anchor a defense that will continue to be a factor in how far this team progresses.

Prognosis – Rutgers prevailed when the two teams met back on September 17 in Bloomington. As the season has progressed Indiana’s trajectory has been upward while Rutgers’s has been downward. The Hoosiers should win the rematch.

Northwestern (6-8-2/3-5-0) – Russel Payne began his first season at the helm of the Northwestern program with a steep hill to climb in terms of climbing upward in the hierarchy of the Big Ten Conference. It is not going to happen overnight but wins over Ohio State 1-0, Wisconsin 2-1 on the road and Michigan State 3-1 created successes that the Wildcats can build on. Sophomore forward Justin Weiss (8g, 2a) is among the positives on the offensive side of the ball for a Northwestern team that remains a work in progress on both sides of the ball.

Maryland (12-3-1/5-2-1) – The Terps have had a very productive season doing a lot of the things well that have been the trademarks of a highly successful program under the guidance of veteran head coach Sasho Cirovski.

Maryland’s ability to put in a full ninety minute shift on both sides of the ball is going to determine just how far this team advances. When they are able to settle into a rhythm on the offensive side of the ball that enables them to apply pressure while maintaining their stamina and organization on the defensive side of the ball this team is going to be hard to beat. However, they are still a work in progress in that regard as reflected in several contests, most recently their 3-2 loss to Penn State, in which they jumped out to a lead but were able to close out the contest.

Sophomore Ben Bender (7g, 5a), the Big Ten Midfielder of the Year, and forward Joshua Bolma (4g, 4a), the Big Ten Freshman of the Year, are among the keys on the offensive side of the ball for Maryland. Junior goalkeeper Niklas Neumann and backs senior Brett St. Martin Brett, junior Chris Rindov and sophomore Alex Nitzl among others are part of a Maryland defense that has allowed a total of 13 goals on the season.

Prognosis – Both teams come into this one off good Big Ten wins. Northwestern closed out regular season play with a 3-1 win over Michigan State. Maryland comes in off a gutsy 2-0 win over Indiana. When these two teams faced each other back on October 18 Northwestern jumped out to a 1-0 lead but the Terps responded with three goals to secure the win. Northwestern may keep it close for a while but the Terps should take control as the match progresses and secure a multi-goal win.