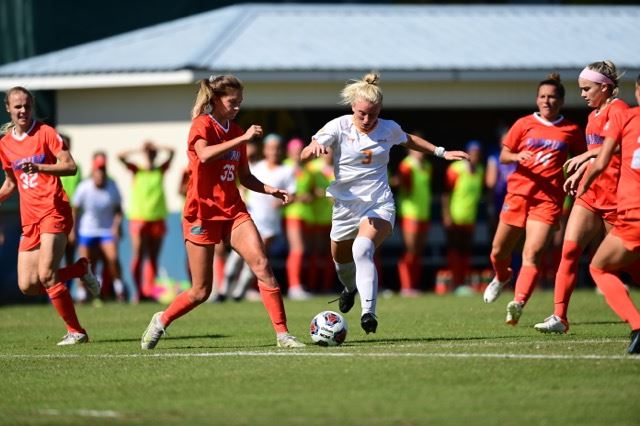 Auburn (12-5-1/5-4-1) – Soccer can be cruel at times but normally when a team does a better job than their opponent of finishing the scoring opportunities that come their way and avoids lapses in play on the defensive side of the ball they will prevail. Auburn prevailed in both areas doing a good job of finishing the opportunities that came their way and playing solid team defense in their 2-1 win over a very competitive South Carolina team in the quarterfinals of the SEC Tournament in picturesque Orange Beach behind goals from defender M.E. Craven and forward Sydney Richards.

When Auburn and South Carolina met back on October 1 in regular season play South Carolina prevailed capitalizing early on several Auburn breakdowns on the defensive side of the ball to secure a 3-0 lead that they never relinquished. Auburn did rally to close the gap to 3-2 but the Tigers had dug themselves into a hole that they could not overcome.

This is a very good and deep Auburn team but a team that may have an upper ceiling that could hamper their productivity from this point forward in the 2021 season as reflected in the fact that the Tigers have had a difficult time in the big contests with loses at home to Florida State out of the ACC 2-1, Tennessee 2-1 in overtime on the road, Arkansas 2-0 at home and a 2-2 tie with Ole Miss on the road.

In order to have a chance against Arkansas, an Auburn attack powered by sophomore midfielder Anna Haddock (9g, 8a) and forwards redshirt sophomore Marissa Arias (7g, 3a) and junior Sydney Richards (7, 1a) will have to find a way to breakthrough a very tough Arkansas defense. The big play ability of the trio of Haddock (4), Arias (3) and Richards (3) is evident in the fact that they are responsible for ten game winning goals. In addition an Auburn backline of seniors H.E. Craven, Hailey Whitaker and stalwart Alyssa Malonson and sophomore Mallory Mooney along with sophomore goalkeeper Maddie Prohaska who had five saves in the quarterfinal win over South Carolina cannot afford any lapses in play against a multi-dimensional Arkansas offense that when in gear can score in multiples. In Auburn’s 2-0 loss to Arkansas during regular season play the Tigers played well but they were unable to capitalize on the scoring opportunities that came their way. As a result the momentum swung to Arkansas as the game progressed and the Razorbacks were able to come up with the big plays they needed in the second half to breakthrough and take control of the match.

Arkansas (15-3-0/9-1-0) – The Razorbacks rebounded from an unexpected 4-2 regular season ending loss to LSU with a 2-1 win over the Tigers in the quarterfinals of the SEC Tournament behind two goals from forward Anna Podogil with defender Reagan Swindall contributing the assists on both goals. Perhaps the regular season ending loss to LSU that halted a 14-match winning streak served as a wake-up call for a talented and explosive Arkansas team for which the sky is the limit but nonetheless has a small margin for error from this point forward in the one-and-done portion of the SEC Tourney and the subsequent NCAA Tournament. Always dangerous out of restarts, Arkansas’ goals in the win over LSU in the quarterfinals came out of a free kick and a corner kick.

This is a veteran Arkansas team that has won the SEC regular season title for three seasons in a row. No matter how you spin it, Arkansas has a bittersweet history in the SEC Tournament. The sweet part is the fact that for the past five seasons they have played their way into the championship match. The bitter part is that for the past five seasons they have been unable to win it. Whether or this is the year that the Razorbacks under Colby Hale have what it takes to win it all and get that monkey off their backs remains to be seen but first they have to top a determined Auburn team to have a chance of doing that.

Arkansas topped Auburn 2-0 when they faced each other in regular season play on October 21. Auburn applied pressure early on but the Razorbacks withstood it and Anna Podogil scored what proved to be the game-winner in the 35th minute of the match with an assist from Kayla McKeon. Chances are pretty good that Auburn will again apply pressure early on seeking to control the tempo of the game. In many ways Arkansas’ history in the SEC Tournament has created additional pressure on them to win. It all comes down to whether the Razorbacks focus on one game at a time and continues to do the things well that have worked for them all year.

Ole Miss (12-4-0/6-3-1) – A few weeks ago after rebounding from a 4-1 loss to Arkansas with four straight SEC wins it looked like Ole Miss was a team on a roll but a subsequent 2-1 loss to Missouri on the road, a 2-2 tie at home with Auburn and a 3-2 regular season ending loss to Mississippi State in Starkville suggested otherwise. The Rebels showed signs of life when they topped Alabama 1-0 in the quarterfinals of the SEC Tournament to advance to the semifinals where they will tangle with Tennessee, a team that they did not face during regular season play.

Ole Miss has performed well when they have been able to come out of the gate on the front foot and score early. In their losses to Missouri and Mississippi State the Rebels allowed both to get on the board first. An early lead does not necessarily equate to an Ole Miss win as reflected in their 4-1 loss to Arkansas in which they had a 1-0 lead at halftime but lost 4-1 but it certainly is a good sign for the Rebels who are at their best when they are able to settle into a rhythm of play. Ole Miss has a potent attack that has scored a total of 33 times but they have been vulnerable at times on the defensive side of the ball allowing a total of 24 goals. Haleigh Stackpole (5g, 14a), Channing Foster (8g, 5a), Molly Martin (10g, 1a) and Mo O’Connor (6g, 4a) are all capable playmakers.

Look for Mississippi’s ability to settle into a rhythm of play that will enable to apply pressure on the offensive side of the ball without leaving themselves vulnerable on the defensive side to play a key role in the outcome of their contest with a very balanced Tennessee team. If Ole Miss can settle into an appropriate balance then they have a chance of advancing. If not, it is doubtful that they can top a #2 seeded Tennessee team that has performed well on both sides of the ball scoring a total of 49 times while allowing only 12 goals.

Tennessee (16-2-0/8-2-0) – The Vols who were picked to finish fifth in the SEC preseason poll have had a banner season to date during which they have exceeded expectations.

Tennessee head coach Brian Pensky, who was named the SEC Coach of the Year, and his staff have done a good job of integrating a talented group of newcomers including SEC Freshman of the Year Taylor Huff in with a veteran team that returned nine starters. The Vols defeated Florida 5-2 in what was the most lopsided quarterfinal contest to advance to face an Ole Miss team in the semifinals that they did not face during regular season play. The win was Tennessee’s first victory in the SEC tournament since 2016 which means this is a group that is traveling in unchartered waters in terms of an extended stay in the tourney.

Tennessee’s two conference losses have been to Arkansas 3-1 in a match in which the Razorbacks jumped out to an early lead and Vanderbilt 2-1 in which the Commodores got on the board early and Tennessee was unable to capitalize on a 21-7 advantage in shots.

Look for Tennessee’s ability to withstand the pressure that Ole Miss will likely put them under in the early going to be a determining factor in this one. Regardless the Vols are a team with a lot of grit which is a big plus. Tennessee has established that they are capable of coming from behind should they have to as reflected in their regular season wins over SEC opponents Missouri, Texas A and M and Auburn.